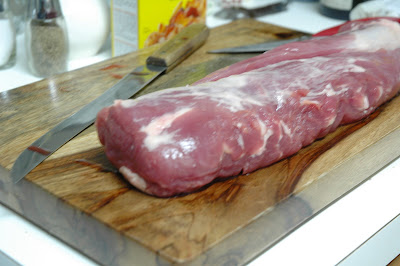 I purchased this lovely, frightening chunk of meat last week. It was destined to become Balsamic Pork Medallions, from the recipe in (as always) "Anyone Can Cook." 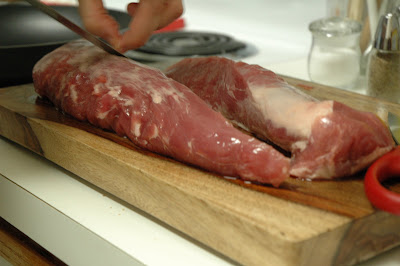 But to our horror, when Sean went to trim the fat, he found that the tenderloin was split down the middle. Is this normal? Do they always come like that?
As devoted readers would know, I often get annoyed with Sean for questioning everything I do when I'm following recipes. He's always saying stuff like, "You probably don't have to drain the meat" or "Why don't you make that skillet sauce in something other than the skillet?" Usually this leads to me losing my mind.
Today, he says, "How thick do I cut these medallions?" I say, without looking at the recipe, "I dunno. I think it said 1 1/2 inches or something. Just make them look like pork medallions."
People, as I'm sure you know, 1 1/2 inches is way too thick. 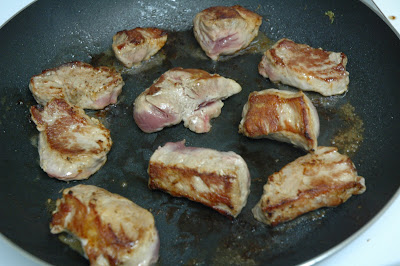 We ended up with pork chunks instead of those lovely, elegant "medallions" that I love so much. And when fried in the skillet (as prescribed in the recipe), they ended up looking like mini-pork chops. Also, a note on the recipe, if you ever feel motivated to try it: Too much balsamic. The recipe calls for broccoli and bite-size pieces of ham to be added, along with balsamic vinegar and brown sugar. It was way too sweet, and the broccoli soaks that balsamic up like a sponge. The ham, however, was a delish addition. 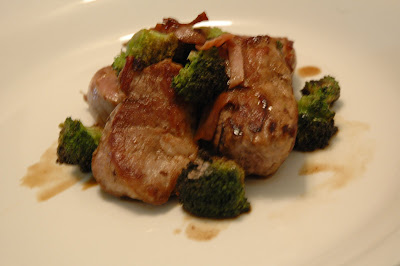 My pork chunks. Sean says we need rice next time. Thanks for the tip, honey!
Posted by Amber at 5:19 PM

I admire you for even buying pork. I am soooo unadventurous when it comes to meat.

I think my original comment about how gross pork is should definitely be reiterated. Ew ew ew.

However, kudos! I agree with Amanda - much admiration for making medallions. My only experiences with pork loin include chopping into whatever shape I can and then stir-frying. Want that recipe? ;)

Oh, and I think my pork loin decided to fall in half too. Maybe that's how they come?? Some pork-loving person should clear that up.

I've never had one fall apart like that, but they do have that weird divide in them sometimes.

But hey, pork chunks are good, too. Pork is just such a versatile meat. Sunday evening, I grilled some pork chops that I'd marinated for a couple of hours in soy sauce, lime juice, honey, garlic, cumin, coriander, turmeric and a pinch of cayenne pepper. They were awesome.

Get the meat from the butcher counter and forget the packaged stuff! Then you'll know what you're getting is true tenderloin. Not that the packaged stuff is not, but sometimes it comes two to a package, making it look bigger on the outside and then sadly smaller once you realize it is two - not one.

I'm also just going to say that reading this over, I have no idea what you were ever talking about saying you don't cook. Girl. You are cooking up a storm! I love it!