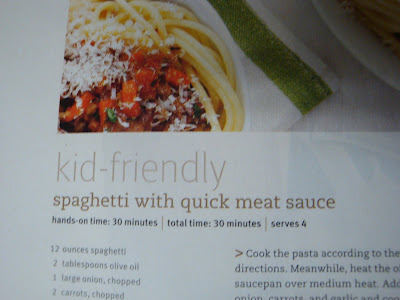 Sean picked out today's meal: Spaghetti with easy meat sauce, from the April issue of Real Simple. You may note the recipe is described as "Kid-friendly," which in my life, may now mean "Sean-friendly." And it was easy, it was kid-friendly and it was quick. But even though Sean loved it (that's right, he used the L-word), I thought it could have used more spice. So next time: easy peasy, but with more KICK!!!1!

I tasked Sean with chopping the carrots, onions and garlic. He had mixed success. As you may note from the onion on the right, he didn't quite halve it. He also chopped each piece of carrot individually. When I asked what was taking so long, he was like, "Listen, it's too late to go back now!!"

Meanwhile, I had my own problems. I tried to use my stock pot/colander combo for the spaghetti and as I was filling the pot with water, I thought to myself, "This seems foolish...won't all this water bubble over the side? I think this has to be wrong...it must be wrong..." And then I did what I did during every math test I ever took. I shrugged and said, "Well...too bad."

So, cutting to the chase and the endgame that many of you were expecting: Yes, it bubbled over and I panicked and said stuff like, "Sean! Sean! Sean! The water...too much...too hot...oh no!" We took the colander part out over the sink and just popped the stock pot back on the stovetop and all was well after that. But seriously, I was under the impression I could use the two pieces in conjunction to make spaghetti. Was I smoking something or is that feasible? 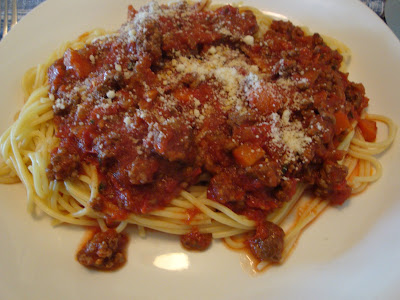 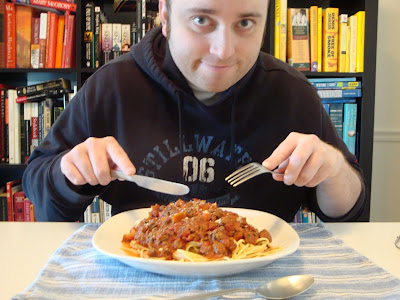 Sean proclaimed he loved it! I proclaimed it was too sweet for my taste! And then we ate way too much and I felt like I had a food baby. The end.
Posted by Amber at 4:18 PM

Yeah, you're not supposed to boil spaghetti in the colander. You can use them together to steam stuff, like chicken before grilling it, or corned beef and cabbage, or shrimp!