From the Atkinson test kitchen 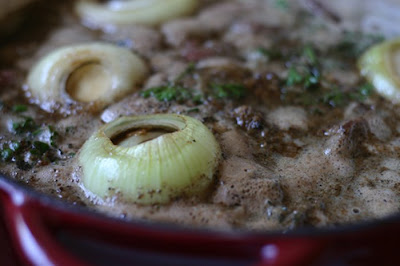 Today's recipe (and photo) comes from Joe Atkinson, a Newport News copy editor and bacon connoisseur. I think it sounds amazing, and was relieved when Joe told me I don't have to use a dutch oven (since, of course, I don't have one). I'm pretty sure if I made this, Sean would ask me to marry him. Oh wait ...
Joe's Beef Stout Stew (adapted from "The River Cottage Meat Book"):

Joe says: "This is the absolute best thing I know how to make, and I won’t lie: IT’S AWESOME. Seriously, it’s especially great on a chilly day, although I’d totally eat it in the middle of the summer, too. And you should have enough to eat leftovers for a few days, which is great when you’re eating on a budget. Also, this is one of those dishes that actually tends to taste better after a night in the fridge. It freezes well, too. You don’t have to like beer to like this, either."

Ingredients
Prep
1. Preheat your oven to 275.
2. Mix together about a cup of flour and some salt and pepper, and coat your beef in it. Set aside.
3. Peel your onions and slice them in half.
4. Chop the bacon up into little pieces and fry until crispy in a 12” frying pan (a cast iron pan is preferable here, but not absolutely necessary). Transfer the bacon to a large, lidded casserole or dutch oven.
5. You should have lots of delicious, hot bacon grease in that pan now. Keep the heat on and put your onions in the hot grease, face-down. Fry until they start to look a little brown and crispy, then transfer them to the casserole.
6. In small batches of 5 to 8 pieces, fry your floury stew beef in the remaining bacon grease. You want your beef to get good and brown. And don’t worry if little bits of it stick to the pan – that’s good. As your little batches of beef get browned, transfer them to the casserole. If during this process you begin to run out of bacon grease, it’s not a bad idea to have some olive oil on hand to keep the pan from completely drying out. Just pour in a little as you need it. Ideally, though, that won’t be necessary.
7. OK, you’ve got all your beef browned and transferred to the casserole. Keep the heat going on your frying pan; you’re gonna deglaze it now. Crack open a can of that Guinness and pour some in. It’ll make a lot of noise then settle down a bit. Scrape all the good stuff off the bottom of the pan and pour the beer and beef bits into the casserole.
8. Put that casserole on high heat now and start pouring in your beer. You need enough liquid to cover the meat. Use whatever combination of beer and beef broth you want. I like to go heavy on the beer – I’ve used as many as three – and use maybe a half-carton of the broth, but whatever … some variations of this recipe call for as little as one can of beer and mostly broth or water. I say the more beer, the merrier.
9. Drop in your herbs. If you have kitchen twine, you can tie them together, which makes it easier to fish out the stalks and bay leaves later on, but I never have kitchen twine, so I just drop 'em in and go fishing when it’s done.
10. As soon as this concoction reaches a boil, put a lid on it (slightly ajar) and transfer it to the 275-degree oven.
11. You’ll want to let the stew cook for a minimum of three hours. After about 30 minutes, your house (or apartment) will start to smell like magic. Check it occasionally (every half-hour or so). If the liquid level drops below the meat, pour in a little more broth. This would be a good opportunity to give it a stir, too.
12. If you choose to use mushrooms, here’s where you’ll add them. About an hour before your stew is done, melt some butter in a pan and sauté the mushrooms till they shrink. Add this, butter and all, to the stew. Stir. Then pop the stew back in the oven.
13. After three hours, your stew should be ready. You can break it out and give it a taste test. You may find that it needs a little salt or pepper. The beef should pretty much melt in your mouth. And the onions will have disintegrated. Fish out the bay leaves and thyme and parsley stalks.
14. If you’re not happy with the thickness, put a little cold water in a bowl, add a teaspoon or two of flour and whisk until you don’t see any lumps. Stir this into the stew. It should get a little thicker. If not, just repeat the process.

"Serve with mashed potatoes or on top of a nice hunk of fresh, toasted bread. And just try not to cry."

Doesn't that sound super-delish? And really manly? I told Sean I'd make it when he has some man friends over. He said, "Mmmkay," so I know he's really excited.
Posted by Amber at 12:13 PM

Email ThisBlogThis!Share to TwitterShare to FacebookShare to Pinterest
Labels: recipes