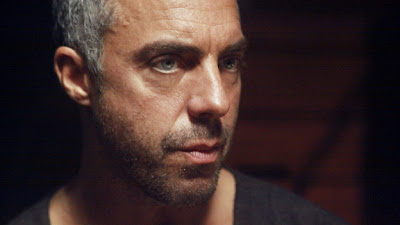 LET'S TALK LOST, BUT DON'T READ THIS IF YOU AREN'T READY AND YOU LIVE AND DIE BY DVR!
WHEW. That's about all I can say after last night's BAM-IN-YO-FACE slam dunk of an episode. I felt at the end the same way I felt at the end of "The Constant": like things were making sense, and intrigued, yet confused. But most importantly, excited!
The LOST producers were really winking at us the whole night, with Richard announcing early on that they're all in Hell and Jacob calling his enemy the "Man in Black." I both like that and don't like it; I don't want the producers taking their cues from us! But quibbles aside, let's get on with it.
RICHARD BACKSTORY GREATNESS
That was such a rich backstory with really excellent storytelling, heartwrenching love and loss, questions of faith and more. It was like a Gabriel Garcia Marquez novel or something, which is kind of the beauty of LOST. Because of the backstories and flash forwards, the producers have been able to explore almost every genre: the buddy cop show, the "Bourne Identity" show, the Spanish colonial romance.
I loved most how the backstory humanized this man who's always been stone-faced and passive, especially with his struggle with faith. He starts out a devout Catholic, is told he has no chance at forgiveness by a priest, believes he's landed in Hell, finds out he hasn't, but must now serve as a prophet, only to lose his faith more than 100 years into the gig. It was just very rich and complex and delicious.
Most delicious was his redemption toward the end of the episode, when Hurley found him at his most vulnerable, about to make a deal with the devil. He found his faith again.
EL DIABLO
Ah, the devil references were abundant in this episode. The priest told Ricardo in jail, "The devil awaits you in hell." As the boat of Captain Magnus tossed toward the island, a fellow prisoner shouted "El Diablo!" When Ricardo sees his beloved Isabella in the cargo hold, she tells him they're in Hell.
When he comes face-to-face with the would-be devil (an incredibly sexy Titus Welliver; don't tell me I'm the only one who has a thing for the bad guys!), he tells him, "The devil took my body." Literally, perhaps?
And of course, Jacob tells Ricardo the man he met is a darkness that needs to be kept in, like wine in a bottle.
So this brings us to the most important question: Is the MIB the "devil"?
The evidence is stacked against him. He...
There was a moment when he was talking to Ricardo in the ship that even I was almost convinced he was in the right. The thought occurred to me: what if Jacob were the devil? What if Jacob took his body, he was forced to inhabit a dead body (as he has with Locke) and has no real body? But how? And why?
Jacob's endless messing with people (who just end up killing each other) and mind games don't make him look too good either...but the same could be said of the Judeo-Christian concept of God, could it not?
And what to make of his plan to kill Jacob, which had pretty much the exact instructions Dogen gave Sayid to kill the MIB? Was the MIB stealing Jacob's line or were Dogen's instructions possibly misguided?
In the end, I was pretty much swayed in Jacob's favor. He makes good sense, and he wears white and is blonde, and in our culture, that means he's probably the "good one." But how does he "bring" people to the Island? Is he God, quite unlike we imagined him? Is the Island the gate to Hell and he, the gatekeeper? Is Widmore the closest thing to a real chosen one, with his electro-charged gates that keep the smoke out?
THE BEST LINES
I'll finish by sharing some of the best lines, imbued with deeper meaning and possible hidden clues:
Lastly, what about Ilana? I get the impression she might be older than she looks, too, due to her intimate knowledge of the island. But what do I know?
Posted by Amber at 12:36 PM

Ok first of all - LOVE THIS EPISODE!! Amazing.

Now onto the analysis. I am suspicious of the "Jacob good MIB bad" just because it's so obvious. How often have we been led down a road only to have the rug pulled out from under us? I'm a little more inclined to believe that neither is inherently good or evil. I mean, Jacob brings people to the island to prove a point to MIB - that people are capable of choosing good over evil. Jacob is RUINING PEOPLE'S LIVES TO MAKE A POINT!

But okay, assuming Jacob is God or Inherently Good or whatever. 1800s Jacob is like Old Testament God and 2007ish Jacob is like New Testament God. OTG Jacob beats the crap out of Ricardo and dunks him in water to prove a point. Angry Jacob is ANGRY! NTG Jacob practically sacrifices himself by allowing Ben to stab him.

Oh, and pretty grossed out about Ricardo chowing down on bacon five minutes after the critter was eating his shipmates. Ew.

On the other hand, MIB provides bacon. Inherently Good, no?

Can't wait until next week...

I know. I think it's (as always) not as easy as it looks. I love the ideas about New Testament and Old Testament God, though.