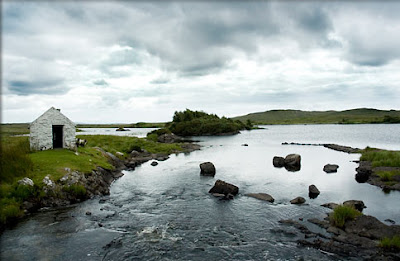 Happy St. Patrick's Day!
In honor of the holiday celebrating all things Irish, I thought I'd share a recipe from my future family. Sean's grandparents hailed from County Kerry, Ireland (shown in this gorgeous National Geographic photo) and his grandmother, Nora, was famous for her stew.
It's still his comfort food; he's a real Irish eater. He would subsist on shepherd's pie if he could.
Some of my own roots are Irish, too, but my family mostly hails from Northern Ireland. My dad usually gets up every St. Patrick's morning to make homemade Irish Soda Bread, but tells me that's not happening this year. Unfortunately, I'm too busy to make the stew, as well, but I hope one of you has the time to try it!
Mrs. O'Brien's Irish Stew
Ingredients
Directions
Dumplings
Posted by Amber at 12:31 PM

Makes me want to go home for dinner tonight haha

i made a similiar irish stew a few times, when you were a baby, except it also had barley in it...