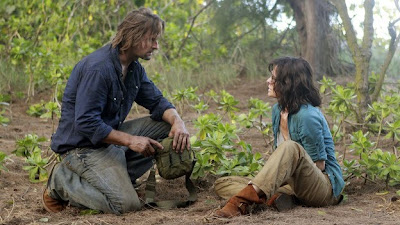 LOOOOOOOOOOOOOST IN LOST SPOILERS ON LOST DON'T READ IF YOU LIKE LOST TO STAY A SECRET!
Soooooo. This week was a killer, for a multitude of reasons that I will just breathlessly type here: night meetings all week, threat of layoffs, threat averted but sadness for those laid off, beer drinking with those laid off, celebrating birthdays, school board, dinner, Target.
The point is, I didn't recap LOST in a timely fashion, and for that, I apologize. Although with so many other people out there who do it so much better, I'm not sure you really need me around. But I like working out my LOST theories with ya'll.
This week's episode was a dud for me. I love Sawyer, and I was one of those people who was anxiously awaiting his Sideways world in hopes he'd be shacked up with Juliet somewhere.
Alas, no. He's a LAPD cop haunted by his parents murder/suicide and bent on hunting down the man who started the whole thing (who may or may not have a healthy relationship with Sideways Locke).
His partner is Miles, who sets him up on a date with Charlotte, who we find to be a bit nosy and quite unforgiving. What does that say about her?
This episode didn't really light my brain on fire, but here are some observations:
So what do you think? Were there Big Truths Revealed and I just missed it? Did you think this episode was super lackluster? Are you peeing your pants in anticipation for next week's Richard-centric revelations episode?
Posted by Amber at 5:17 PM

Definitely, peeing in the pants for the Richard episode... Hopefully it will be somewhat revealing.

As to the lackluster nature of the episode... I agree. It was nice to see more sawyer and his relationship with Miles, but it felt lacking.

The question is, what will he do with Kate (who was dressed to look like Charlie, I thought)?

Kate TOTALLY looked like Charlie then. Good call. I really don't know what to think about that encounter.

so i just watched this episode.