Sewing: The Next Frontier 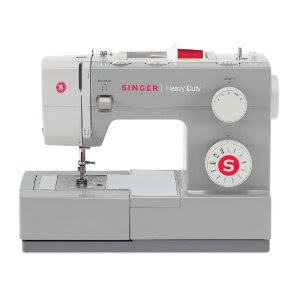 Longtime readers of this blog know that I'm not the kind of person who took home ec. Although I was probably the perfect candidate for the course, I scoffed at it because I thought I was going to be a working woman who was unconcerned with domestic matters. HA! Who did I think I was? First of all, cooking, cleaning and sewing are way more complicated than almost anything I do in my professional career and second of all, they're skills that enable you to save more of that hard-earned cash. Plus, how crucial was it that I use one of my elective credits on an upper level math elective that almost killed my GPA?

Two years ago, I started this blog as a way to document my efforts to learn to cook and was stunned when, in about the span of two months, I had basically learned how to cook. There are still plenty of challenges I haven't tackled yet, but I get the basic gist.

So I thought it was time to move on to another skill that eludes me: sewing. Sewing is so technical and demands so much skill and focus that it actually scares me. But I went ahead and asked for a sewing machine for Christmas, and received the one you see above: the Singer Heavy Duty machine.

On Sunday, I took the machine out of its box and put it together. I was actually laughing to keep from crying when it took me the better part of two hours to properly thread the machine. I don't expect to become an expert seamstress, and I'm pretty sure there are many blogs that explain sewing WAY BETTER than I ever could, but I do want to document some of the projects I tackle as I go.

So far: I've learned how to sew a buttonhole...kind of. I'm still not sure I'm using that feature correctly.

I hope you'll all speak up and give your best advice, share tutorials that have helped you and just generally be the supportive friends I'll need in this endeavor!
Posted by Amber at 11:30 AM

My mother-in-law has been teaching me sew since last Christmas. Her advice (and frustration haha) was to start with something very simple like an apron. My hardest thing is to practice on easy stuff so I tend to try things way out of my skill set because why would I want something that easy to do right? Wrong. Bore yourself to death with the basics! Also, keep an eye out for the $.99 sales on patterns at Joann Fabrics because it's a great way to build a pattern stash for hopefuls. I usually get $13-$15 patterns for $.99! You can browse the patterns online and take your list to the store and pull it that day. It's a limit of 10 per day so it's easy to pile up on even stuff you figure 'I might possibly think about making that one day'. There is also a book called One Yard Wonders (http://www.amazon.com/One-Yard-Wonders-Sewing-Fabric-Projects/dp/1603424490/ref=sr_1_1?s=books&ie=UTF8&qid=1325609360&sr=1-1) that is great for simple projects. Otherwise, hit up sewing shops for beginner classes or craft shops will have things like tote bag classes.

Buttonhole?! I've been tinkering with sewing for at least a decade and seriously sewing for the past three years. I honestly had not sewn a button hole until this past summer. Zippers, yes. Buttons, no. You're already better than you think!

I agree with June_Sept. Start a little slower and build your confidence. In my tinkering years I did a lot of square things: pillows, curtains, incredibly simple quilts. I concur that an apron or tote bag is a good place to start. (I also have One Yard Wonders and there are a lot of simple projects in there to work on.)

Also, when I got serious I took a basic sewing skills class at a local shop. I'd been doing small projects for a number of years but when I took the class I found that there were better ways to do a lot of the things I had taught myself. I had to retrain some bad habits. I definitely recommend taking a class at the beginning. (It's also a great way to meet new people.)

Best of luck with your sewing. I've really grown to love it!

I may never even attempt a buttonhole, but I got an "A" on a fairly complicated tutu...