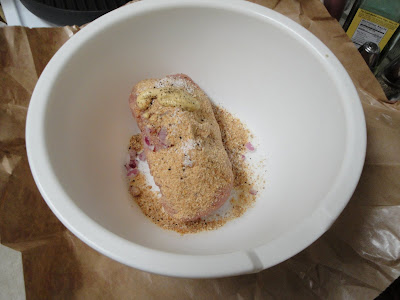 Last week, I opined that I wanted a houseguest to come enjoy dinner on our porch and within hours, an email with the subject line "Special request" landed in my inbox.
My friend Ashleigh put in her order, and she wanted turkey burgers with smoked gouda. I had no prior experience with turkey burgers, but when I set out to make them, I realized I had never made any burgers! I always buy the pre-made patties like a dummy. Yet another thing that I can do better without giving into convenience.
I skimmed around the internet for advice about flavoring and decided to kind of wing it. I put a pound of ground turkey, chopped red onion, minced garlic, a 1/4 cup of breadcrumbs (homemade!), a dollop of dijon mustard and salt and pepper in a mixing bowl. Then I mixed the whole mess up with a fork (and later my hands because using a fork is just stupid). 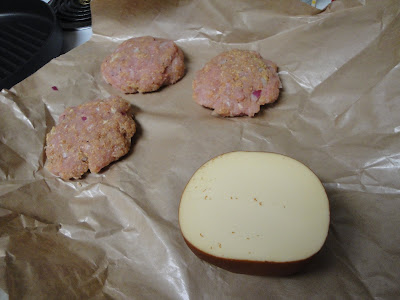 I formed the patties and then attacked my block of gouda. And when I say attack, I mean attack. I had EPIC difficulties wielding my cheese slicer, which was too narrow and just would. not. work.
It was pretty annoying, so I'm ready to get one of those awesome cheese slicer thingie doodles. 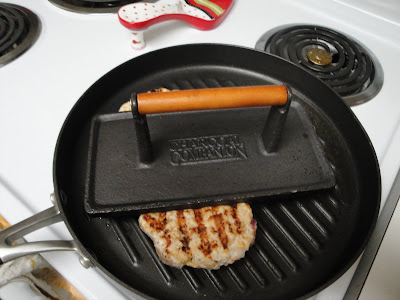 I put some vegetable oil in the new grill pan and cooked the burgers on each side for probably 3 to 4 minutes, with a cast iron press on top. 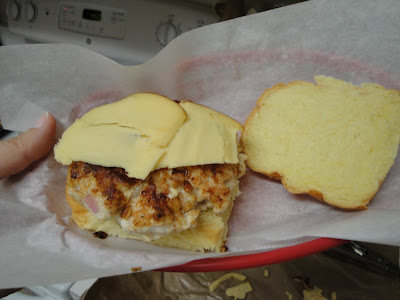 I topped two of the burgers with gouda and served them in some sandwich baskets I picked up in the $1 section of Target. FOUR FOR A DOLLAR. It was super awesome. 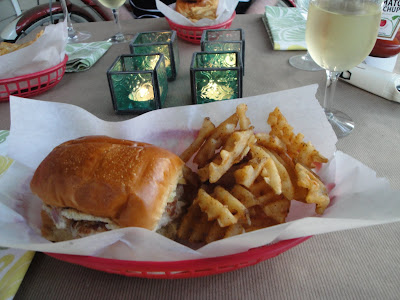 We paired the meal with Alexa's Waffle Fries and I served our little cookout meal on kraft paper, for easy cleaning purposes. 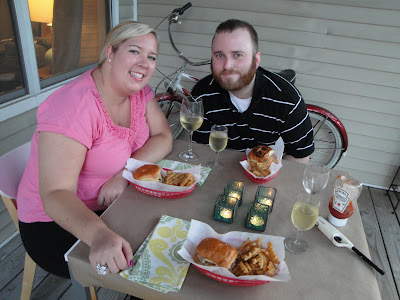 Sean and Ashleigh ready to dig in! 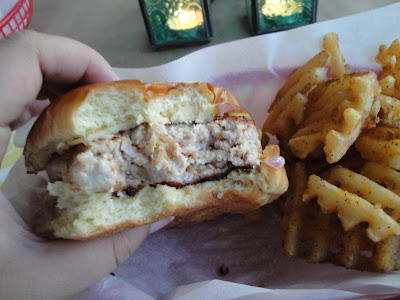 This is a shot of turkey burger. The thing about turkey burgers is that they're pretty lame. From the first bite, you're like, "Damn I want beef." But it was well-seasoned, quite flavorful and by the third or fourth bite, I was all about it. Plus the turkey is SO healthy.
So as you prepare for your grilling feasts this weekend, consider the humble turkey. It's surprisingly delicious, and a great option for your dieting buddies!
Posted by Amber at 1:20 PM