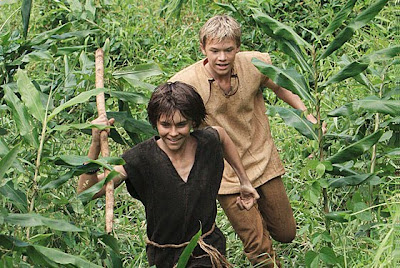 Let's get this right out of the way.
I was totally digging last night's episode.
I know a lot of you (A LOT OF YOU) hated it, and I can't blame you. Two years ago, my least favorite thing about LOST was the mystical element. I wanted scientific abnormalities. I wanted nefarious government, rich guy ne'er do well intrigue. I did NOT want to hear anything else about this bullshit Jacob guy that I was convinced Ben had invented. I did not want to see Smokey ever again.
But here we are. And at the end of the journey, I'm finding the revelations delicious. And I especially love being right.
Last summer, we were re-watching the first season and I started taking notes to track common themes (lame, I know) and I started noticing that backgammon seemed to be imbued with significance.
Don't know anything about backgammon? Yeah, me either. But I looked up the Wikipedia, which basically said backgammon is the oldest board game for two players in the world, and takes luck and strategy to win. A player wins when all his pieces are removed from the board. Players can also raise the stakes in the game.
Hm...that sounds a lot like a game played for a bajillion years by Smokey and Jacob, except they play with people. And perhaps to win the game against Jacob, Smokey has to remove all his pieces from the board (i.e. the LOSTies).
But that could be a lot of mumbo jumbo on my part. Another thing I loved about this episode was that it set Jacob and Smokey up as brothers, just like Jacob and Esau. At the beginning of this season, I mentioned on this blog that I thought it would be interesting if the MIB and Jacob turned out to have a similar story to those Biblical brothers, who were lifelong enemies. Welp, look who gets a cookie! That's right...ME!
The thing I'm struggling with is whether it's good to be right. Because as much as I'm glad I was able to accurately predict some elements of the episode, I don't know if that necessarily made it great storytelling. The whole backstory was a little too simple...when you give a bad guy an empathetic backstory, it becomes kind of boring...like showing us Anakin before he was Vader.
Anyways, let's hit the big notes:
I think, of every line spoken on the whole damn show, Allison Janney spoke the most telling when she said, "Every question I answer will simply lead to another question. You should rest. Just be grateful you're alive."
Again, the show was back in the thick of the faith vs. science debate, and I really do believe that's what the show is about. At times, it seemed like it was about many different things, but at its core, it's always been about different world views. Is it better to question everything and search for answers, or better to have faith in a greater power and accept one's fate as it is? The show seems to have been a six-year-long pros and cons list for both, and I think most of us wrestle with the desire to just go with the flow or to seek for more.
One note about this week's episode: While it was super corny, I found myself disappointed to see that next week, we'll rejoin the castaways. Has anyone else come to hate most of them the way I have?
Posted by Amber at 2:35 PM