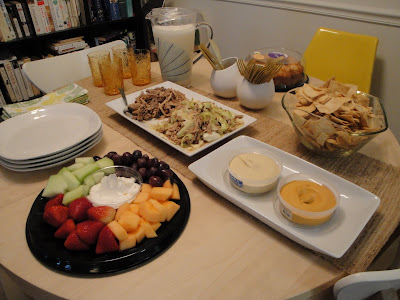 We hosted a small get-together for the LOST finale the other night. It was quite thrown-together on my part; I just whipped up pre-mixed pina coladas, set out hummus and a fruit tray and called it a day. Thank god for Sean's coworker, Andi, who made the main portion of the meal. 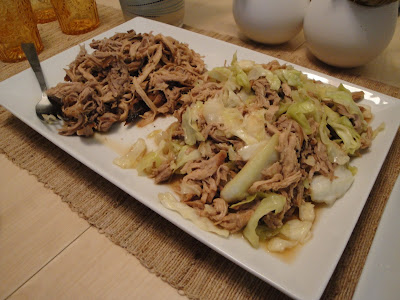 Andi whipped together Kalua Pulled-Pork, a dish she's sampled in Hawaii, where LOST was filmed. She made one version with cabbage (the traditional way) and one without. Let me tell you, this pulled pork was delicious, flavorful, smoky and according to Andi, EASY. 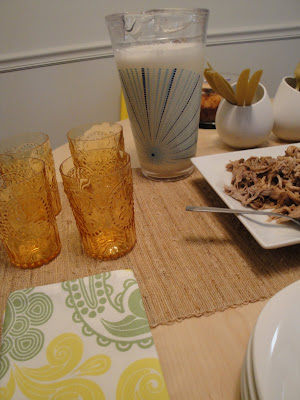 I set the table with a quick island theme. The runner is from Target, the glasses from Anthropologie and the napkins were recent scores from Home Goods.
Here's the recipe, care of Andi. She says she learned the recipe from family friend Laurie Segawa. Traditionally, the dish is made by wrapping pork in palm leaves and cooking in an underground pit. Without palm leaves or a pit, Andi relied on her trusty Crock Pot.
Kalua Pulled Pork
Ingredients
Directions
Posted by Amber at 1:30 PM

wow girl this look so yummy!!