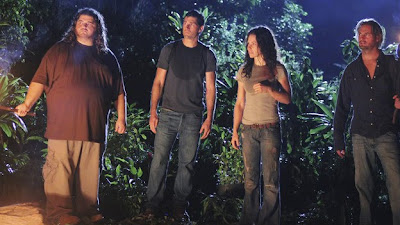 Watching LOST last night, I had a feeling I couldn't quite pinpoint. It would be unfair to call it disappointment, because it's nice to get answers and nice to have theories validated. It's more complex than that...it's the feeling of getting what you always wanted and realizing it's not what you wanted at all.
Insert cliche about the journey, not the end here.
But seriously. The fun of LOST has always been the mystery, and I'm wrestling with the knowledge I now have. But that doesn't mean we've got it all figured out. Far from it, in fact. I'm just saying I don't think there's any way the end could be as satisfying as the journey.
That said, here were my thoughts as my coworker and I hashed our feelings out today:
So what happens next, you guys? I have no idea how one would kill the Man in Black. Part of me wonders if the only way to kill him would be to destroy his origin: the Island's light. That would give the LOSTies another fine paradox: how to kill the man without destroying the one thing they pledged to protect?
If I'm wrong about that (which is highly possible), I'm still not sure how I'd like to see the show end. Do I want them to leave the island and return to their Island Lives at Home? Do I want to see their lives converge into one with the Sideways lives? That would defeat everyone's quantum physics theories.
I just don't know what to think. How about you?
Posted by Amber at 2:22 PM

As for what's next: anything's possible!