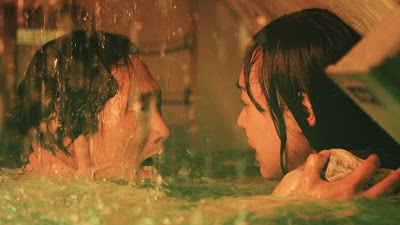 You guys.
I kind of can't even talk about what happened on LOST.
That sound? Oh, that was my heart breaking.
First of all: Damn good episode. One of the things I liked best about this episode was that it just moved the plot right along in a tidy way. It didn't introduce any characters I don't care to know. It didn't show me some piece of Island architecture that just appeared. It didn't confuse me, which was good, because I was able to use my emotional reserves to stare aghast at the screen during the super tragic ending.
I'm going to say it, and I'm sure you're thinking it: Jin and Sun never got a fair shake on this show. It was all struggle for them. But I'm glad they were together, in love and speaking the same language.
I won't lie; there was a moment where I was like, "Jin! You have a baby to worry about!" And the whole scene smacked of "Titanic"...but when Hurley broke down, I was a goner, too. I was glad to know that, although not a tear was shed for Sayid 2.0, the Losties felt the same way I did about Jin and Sun.
Moving on, let's go over the big hits:
All of that was fine and good, but I forgot about my sorrows the moment BACKGAMMON was shown for next week's preview. As you may remember, I came up with a theory that backgammon, for whatever reason, was the most important thing ever in the canon of LOST. When Sean and I rewatched the first season last summer, I noticed Locke was always playing backgammon with people and it seemed to have way more significance than just a game. Walt, you may recall, was outstanding at stomping Locke's ass in backgammon. Is it time for his return?
Also, the mysterious white and black stones in the cave with Adam and Eve? I'm convinced they're backgammon pieces. I can't wait to find out what next week holds.
How about you guys? Are you devastated about Jin and Sun? Do you like the new, super confident, "I got this" Jack? Do you agree Claire is being treated like the last kid picked for kickball?
Posted by Amber at 3:25 PM

F this. I just wrote a whole paragraph about Lost and then it didn't take my comment. Ill talk to you tonight about it :)

Great analysis, I totally agree. Love the Jack. Something no one has commented on which I found particularly interesting is Kate telling Jack "I didnt know where you were, I couldnt find you" as a Jate fan, I loved that moment where she was vulnerable (but I cant recall when it was- perhaps when she got shot and really needed a doctor).
I think Claire as a relation of Jack's will have some serious time on the kick ball field in two weeks.
Also I am devastated about Jin and Sun, but ever hopeful since in the sideways world they are together.

I, too, thought it was weird when Kate was like, "Where WERE you?!" It seemed very all-of-a-sudden to me, especially since Sawyer was lying unconscious on the ground.