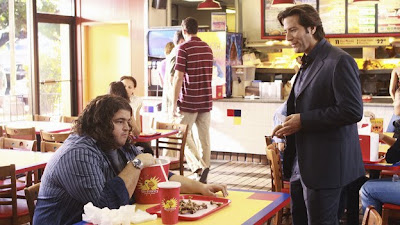 I'm not even going to bother with my requisite spoiler warning. If you haven't watched it yet, I'm sorry, ya'll.
I wanna say something upfront: I love Hurley. I do. But I felt like, if anything, Tuesday's episode made me angry with the writers. SO many things in this episode seemed like the conclusion paragraph of a hastily written research paper: "In conclusion, that's why this happened and how people felt about it and it was a big deal."
I mean, could the revelation about the whispers have felt any more anticlimactic? Things I hated about that moment:
But anyways. Let's recap the big stuff, shall we?
I'm still with them and I still trust this story will unfold as intended. I just thought this episode was super weak. Sure, it was nice to see Hurley finally get his mack on with Libby. But it didn't have the delicious peal-back-the-onion-layers that the Richard and Desmond episodes had. Sigh.
Posted by Amber at 10:54 AM