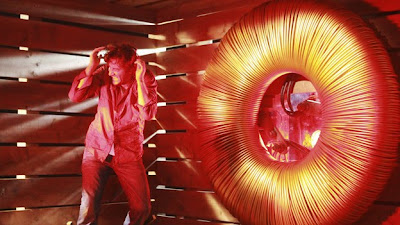 LOST OMG OMG LOST OMG OMG LOST!!!
I'm not going to lie. I definitely have to watch last night's episode again because I was writing an article while it was on and couldn't properly pay attention (re: take notes like an obsessive crazy person).
But let's go over some big a-Ha! moments:
We're still left with some questions.
What the hell was that thing that blasted Desmond into the great unknown? It looked like a set for a Britney Spears video in the late '90s (and he frankly looks like he's dancing in that shot at the top of this post).
What's Desmond's actual role? How can he harness what he now knows to save the island? Is it possible all of the castaways could connect with their Sideways selves in Widmore's microwave?
What is Desmond going to do with Sayid and the rest of Flocke's flock?
And last but never ever least, where do we see this all going? My biggest fear is that it will crumble into anticlimactic mumbo-jumbo like the final book in the Twilight series. If it turns out Desmond can protect everyone with electromagnetic mind bubbles, I will be pissed!
Posted by Amber at 2:14 PM

For the Britney set: I was equally confused. So I asked my engineer hubs. He says that is called a solenoid. An everyday example is a flashlight that you have to shake up to use.

As best I can remember, this is how a solenoid works. Basically, metal is coiled around a magnet. When you move the magnet inside by some mechanical means (like the giant diesel engine in lost or when you physically shake the flashlight), it generates current. So, when the first guy touched all that live coiled metal, he was quickly electrocuted.

Then I asked him why there were two solenoids and why Desmond disappeared, and he said he had no idea how they were using it or why he poofed. Lol.

ooh this is very interesting. I have to give myself some more time to meditate on ideas. This may demand a two-part recap. lol.