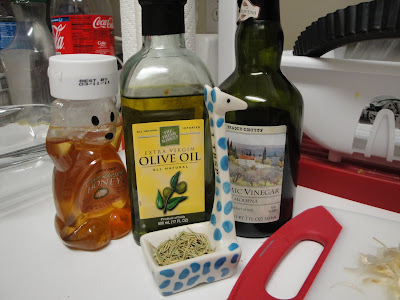 Sean and I have quite different opinions about coming up with menus. Here's a typical conversation:
Me: What do you want for dinner?
Sean: I don't know. What do you want?
Me: I just asked you!
Sean: Um....pork?
Me: Pork chops or pork medallions?
Sean: Whichever.
Me: How do you think the pork medallions should be served? What kind of marinade or sauce?
Sean: Why don't you just cook it?
UGH. So exhausting.
When this happened recently, I did a quick google search and came up with Balsamic Honey Pork Medallions.
I like balsamic and I like honey, so that sounded good to me. 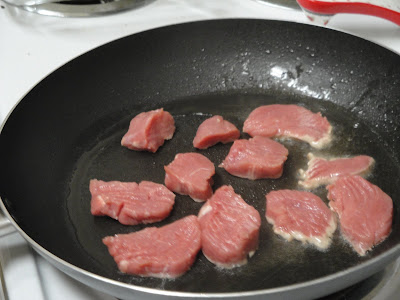 First, I had Sean cut a tenderloin into medallions to fry up in the pan. NOTE: I have learned after doing this twice that I like medallions better when the pork is roasted or cook whole in some way. I'm kinda over this pan-fry thing. But it gets the job done.
Fry up your pork bits in canola oil, but don't go all the way. These bad boys are just going right into the oven to cook a little longer. 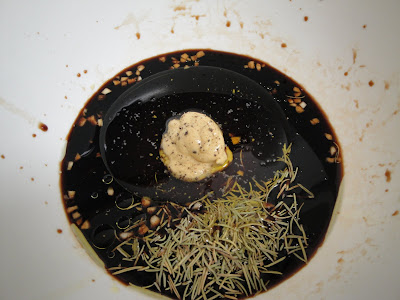 While Sean did that, I assembled the ingredients of my marinade: balsamic vinegar, minced garlic, rosemary, honey, olive oil and a dollop of dijon mustard. 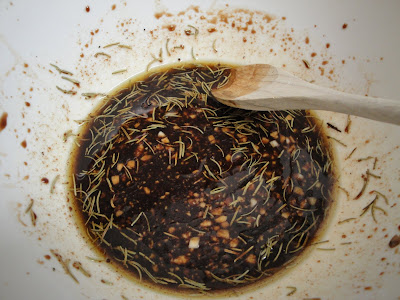 Stir it together! Then we placed the pork medallions in a glass dish in a single layer, covered with the marinade. 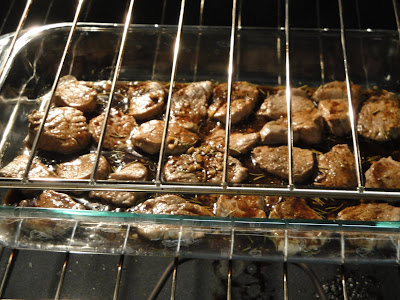 Cook a little longer, until that mess is done. Try not to overcook like I always, always do. 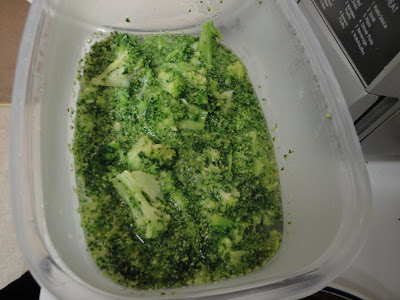 I thought broccoli would be a good accompaniment and we had some frozen broccoli hiding in the back of the freezer. I wanted to steam it, but Sean was like, "Let me handle this" and microwaved it to oblivion. Srsly...babies could eat that mess. But we were able to salvage some pieces from the muck. 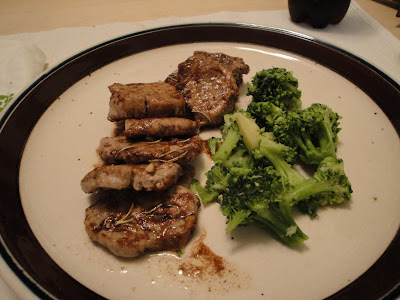 As usual, my pork was on the dry side. Story of my life. The flavor was good, but I would have gone a little lighter with the balsamic vinegar; it overpowered EVERYTHING.
The marinade was, however, great to dip the broccoli in. So all was not lost.
Posted by Amber at 12:30 PM

I'd have chopped the rosemary up smaller.

Also, just a hint--pork is safe to eat slightly undercooked. So even if you pull it out a few minutes earlier it's still perfectly safe (and delicious) to eat. that might help you keep from over cooking it.

you know, i had no idea that i could undercook pork just a bit until a couple of years ago. i'd gone out to eat and my waiter asked how i wanted my pork chops cooked. i was like "whaaaaat?" even though it's tasty, i always hear my grandmother's voice in the back of my head telling me i'm going to get worms. i ignore it.

but, the pork medalions look super tasty (and the pic of the marinade is pretty!)