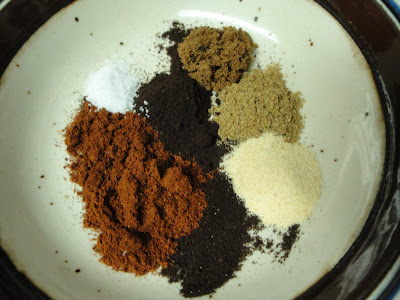 Yesterday I showed you last week's cooking disaster, so today I'm much happier to share a cooking VICTORY!

I love pork tenderloin. It's almost always my entree of choice when I visit a fancy restaurant because it's so easy to mess pork up. Every recipe I've tried in the past has resulted in ludicrously dry pork that I just gnaw on for what feels like hours.

I remember when I was just starting to cook, people told me about searing. I lacked the vocabulary and the know-how to understand what they were talking about, so every time I tried searing, I ended up cooking the meat for too long.

But on Saturday, all of that changed! For I made coffee-chile pork tenderloin, topped with bourbon peach sauce. And it was AMAZING and EASY.

First, I prepared a spice rub with the spices shown above: 1/2 teaspoon of brown sugar, 1/4 teaspoon coriander, 1/4 teaspoon garlic powder, 1 packet of Starbucks Via ground coffee (I used the Italian Roast), and 1 1/2 teaspoons of chili powder. The recipe called for ancho powder, but listen folks, this was spicy enough...frankly I'll use less next time. 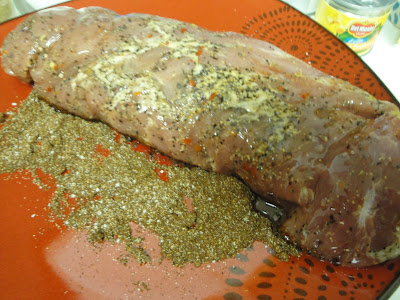 I have found it increasingly difficult to find a pork tenderloin that isn't pre-marinated, especially because we live so close to Smithfield and their products dominate the pork aisle. I decided to use their "Peppercorn and Garlic" marinated tenderloin, so for that reason I skimped a bit on the garlic powder and didn't need to rub any oil on the meat to help the rub stick.

I poured the mixed spices onto a plate and pressed the tenderloin into it, rolling it until it was covered. While doing this, I preheated the oven to 375. 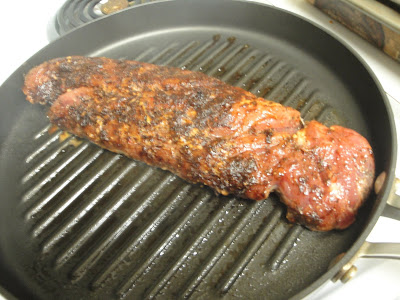 I then liberally sprayed my grill pan with canola oil and with the pan nice and hot at medium-high heat, I popped that bad boy on there. This is what it is to sear meat: you allow it to cook for about 3 minutes on each side, just long enough to form a beautiful crust. That's going to keep all the juices in while you then bake the tenderloin. 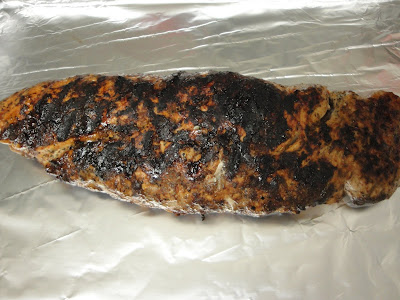 I placed the tenderloin on an aluminum foil-lined pan (just to reduce mess) and placed it in the oven for 30 minutes. Perfect amount of time to dilly dally on the Internet and finish an episode of "Felicity."

When 30 minutes passed, I cut into the middle to see if it was done and it was, but I was schocked by how juicy it was. It sliced like buttah. I used the foil to tent the meat while I made the bourbon peach sauce. 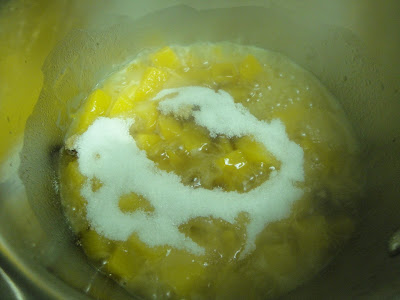 If I'd had my druthers, I would have used fresh peach slices, but what I had were cans of diced peaches. I melted a tablespoon of butter over medium high heat, then added the peaches and cooked for 2 minutes. Then, I added 1/4 cup of brown sugar and 1/4 cup of granulated sugar. I gave that a good stir, then removed from the heat to add 1/4 cup of Maker's Mark bourbon. Mmmmmmmm. 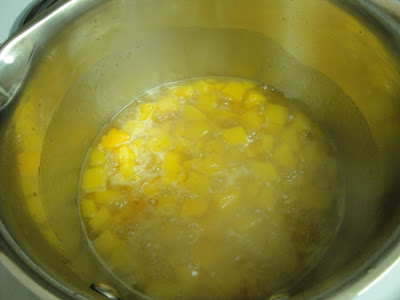 I returned to the heat and let it simmer. I realized later that at this point I was supposed to add a second tablespoon of butter, which might explain why my sauce didn't seem thick enough, but no matter, it was still delicious. 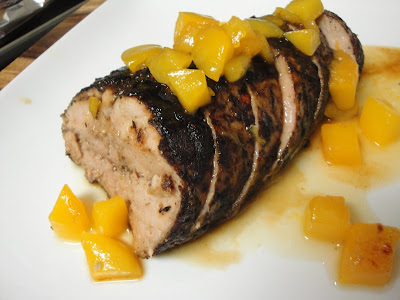 I topped the pork with the sauce, which gave it a sweetness to contrast the spicy rub. It was SO GOOD. I cannot express to you how amazed I was. It really might be the best entree I've made. If you like pork (heck, if you think you don't!) you should try this recipe; don't be afraid to adjust the rub to your taste, but also don't be afraid of the coffee. It gives it a smokiness but doesn't taste like you poured Starbucks on your tenderloin.
Posted by Amber at 11:52 AM

this looks AMAZING. can't wait to try it!

sounds yummy but any suggestions for a different sauce (non-alcoholic)?

You could probably do a vanilla peach sauce...or maybe brown sugar?