As you know, I love to indulge in a fashion review on this here domestication blog, so let's take a break to giggle over the fashions displayed at this year's Met Ball. The Met Ball is an annual see-and-be-seen event celebrating the opening of the new Costume Institute exhibit...this year it's dedicated to the dearly departed Alexander McQueen. The best and worst thing about the Met Ball is that it's often the place where people take the most daring fashion risks, which means we get lots of gasp-worthy outfits and many more cringe-worthy ones. Let's take a gander, shall we? 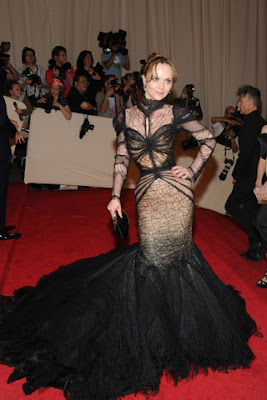 I love when someone somewhat less expected slam-dunks it. Christina Ricci's Zac Posen gown is the very definition of a Met Ball dress: graphic, frou frou, dramatic, perfectly fit and it makes a very short person look like a statue. It's like Edward Gorey Couture, and I love it! 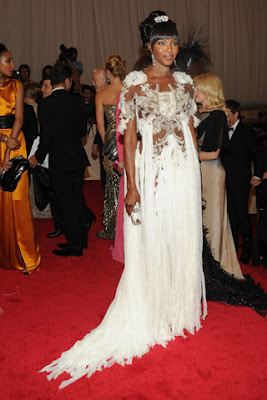 Naomi Campbell was one of the surprisingly few folks to wear McQueen to the event, and I love her for wearing this dress. Yes, it looks like something out of The Mummy, but isn't it kind of cool in that way? Very high fashion, but still delicate and ethereal. 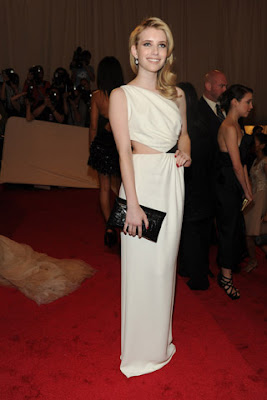 Emma Roberts always looks great, but I thought she looked very sexy in a grown-up, not showy way in this Michael Kors column dress. I do think she looks a touch washed-out, so I might have skipped the smoky eye in favor of a coral or hot pink lip, but otherwise, pretty great. 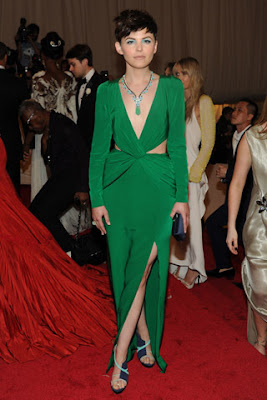 Ginnifer Goodwin's dress is from a designer Topshop line, which is pretty cool. I always think she's trying a touch too hard, and the make-up and shoes are kind of ridiculous, but I like how it all goes back to the necklace and that color is really gorgeous on her. 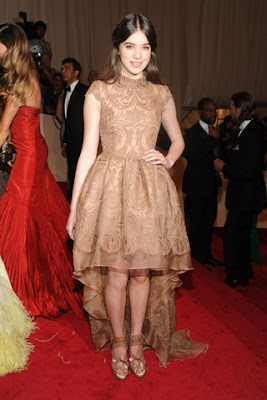 Hailee Steinfeld is just awesome. I usually am not a fan of mullet dresses, unless they're appearing in the runway scene from "Don't Tell Mom the Babysitter's Dead," but this Stella McCartney dress is youthful, high fashion and yet still demure. I like when people pull off kooky in a very elegant way. I could really care less about Isabel Lucas, but her Louis Vuitton dress is perfectly set off by her dramatic accessories. 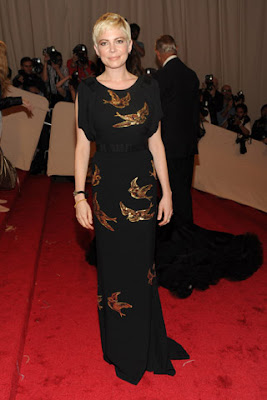 Birds are pretty played out, but I couldn't help but like Michelle Williams' Miu Miu dress. Great cut, great design, just lovely. I also like that she resisted the urge to pair it with tons of feather accessories like I would have done! 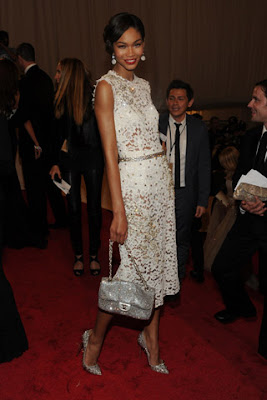 It's simple, but Chanel Iman's Dolce and Gabbana sheath is just so classy and lovely and unexpected. 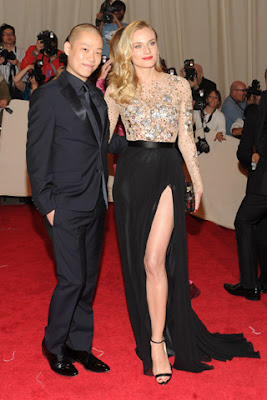 Diane Kruger seriously looks like Veronica Lake in this Jason Wu dress. Really beautiful and timeless, with perfect styling. I also like that the lady knows how to work a shapely gam.
The Worst 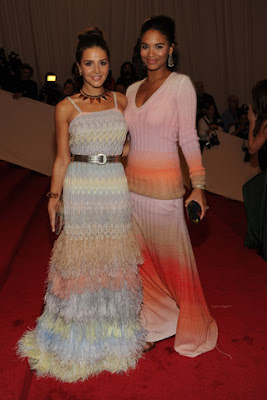 I totally dig Missoni's style, but c'mon....Margherita Missoni and Joy Bryant look like extras from the prom scene in "Never Been Kissed." Not only is the cut incredibly unflattering to Margherita's bustline, but it's overaccessorized with the belt and the bracelet and the necklace and the earrings and the prom hairsdo.

Joy fairs a bit better, but a ribbed sweater dress? I don't think so. 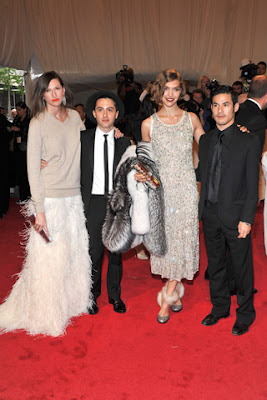 I love Jenna Lyons' way of mixing fancy with casual in the J.Crew catalog, but this is a bit too far a stretch for me. She literally looks pissed to be there, like she was just lounging around the house when she remembered she lost a bet and HAD to go to Met Ball wearing a feathered skirt. It's like she was thinking, "I'll show THEM." Have some respect, woman! 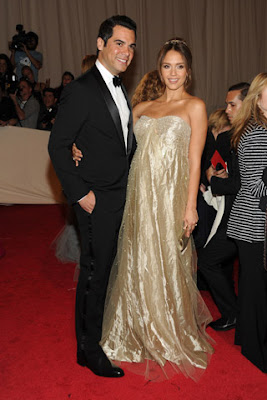 Jessica Alba's Ralph Lauren design just looks cheap to me, like she went to her closet, dug out a tree skirt and went to town. 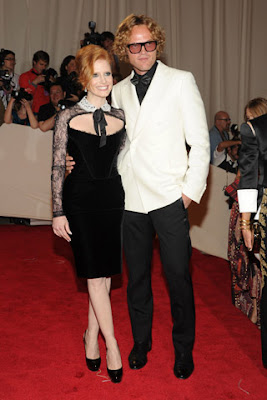 The biggest crime at the Met Ball is looking a) boring and b) older than your age. Jessica Chastain, 30, is poised to become a super big star after a couple of her summer movies, including Terrence Malick's "The Tree of Life" is released, but she looks like Ivana Trump's younger sister. The hair is dowdy, the dress looks like a sexy Hester Prynne Halloween costume. No dice. 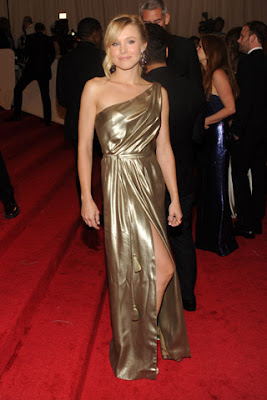 I feel like Kristen Bell has chronic issues with proper fit. Look at what this Tory Burch dress is doing to her right boob...it looks like she stuffed her bra with a plastic baggie. And the bottom of the dress is so wrinkled and looks kind of like it's puckering...not good! 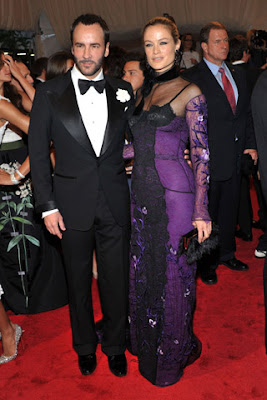 Carolyn Murphy seems to be wearing the purple version of Scarlett Johansson's Oscars gown, and just like Scarlett, she looks like she's tried to squeeze her boobs into a training bra. 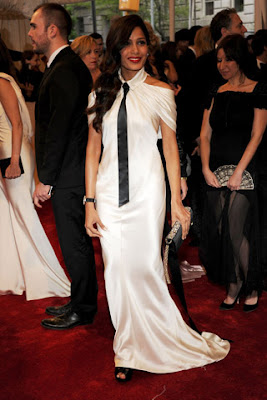 And last but not least, Freida Pinto wore a piece from Chanel's new Dilbert-inspired collection. If only she'd styled her hair like Alice, the triangle-haired lady in the comic strip.
So, thoughts? Agree or disagree? There are many, many more laughable fashions (it was hard to choose!) at Style.com, where I found all these pictures.
Posted by Amber at 1:26 PM

lol I loved what you said about all the "worst" dressed people... I agreed with all of it. I couldn't care less about isabel lucas either but she did look pretty kooky fabulous. stumbled across your blog. really enjoying your posts :)

Thank you, Angel! They can be pretty all over the place, just like me.