The SAG Awards are an interesting no-rules awards show. Some actresses dress it way up...maybe too much so; others see it as a chance to take some serious risks, and others (like Meryl Streep) toss on an LBD from the back of the closet and call it a day. I was impressed to see a lot of risky moves, but I wasn't sure how many I thought were really successful. Can't fault a girl for trying, though! Here's my round-up of who knocked it out of the park, who gave it a good college try and who needs a new stylist, stat. 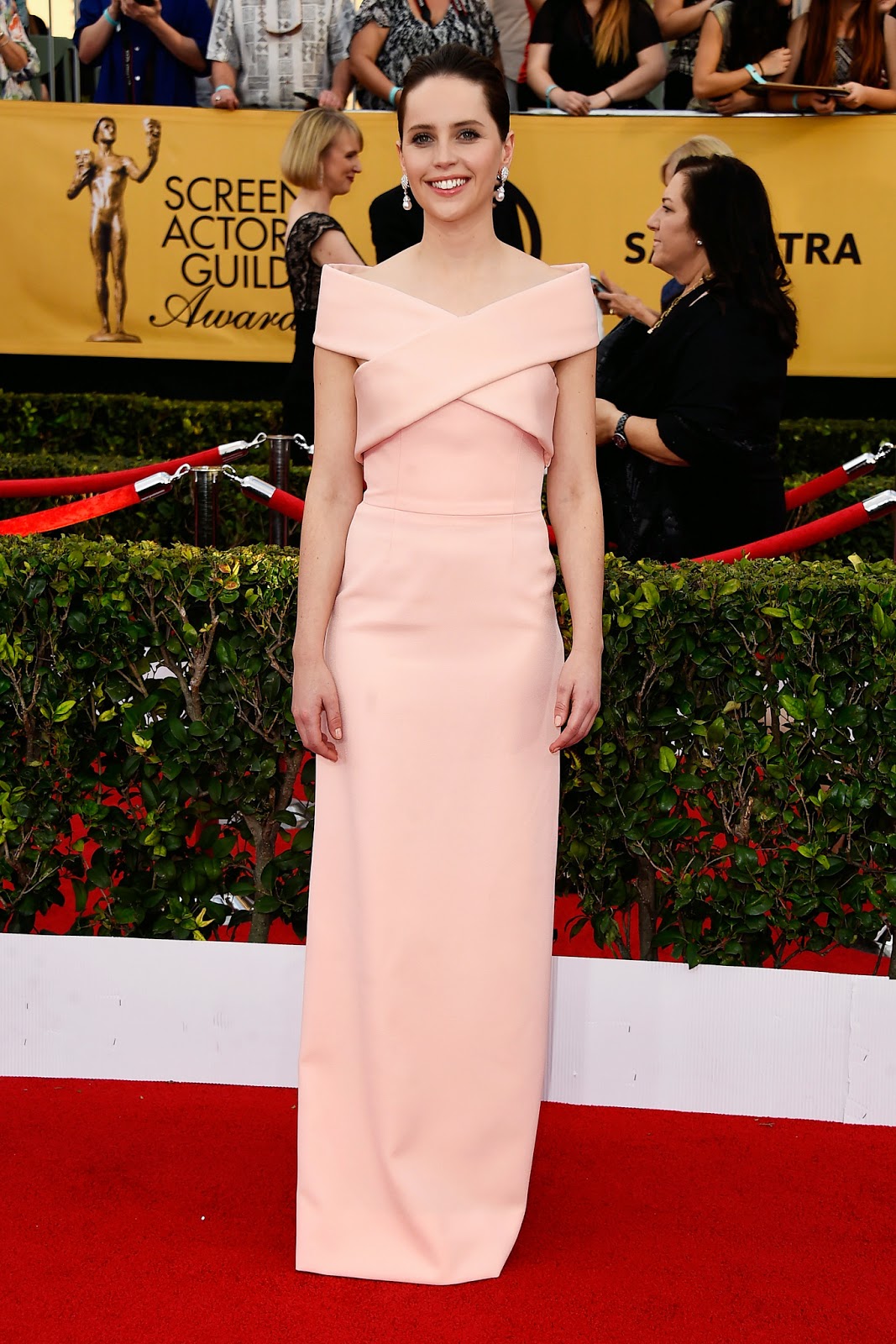 Felicity Jones looks like a modern-day Audrey in this modern, yet pretty Balenciaga. The neckline is gorgeous, the color is perfect with her peaches-and-cream complexion, and the gown feels completely appropriate for a nominee at a union awards show. 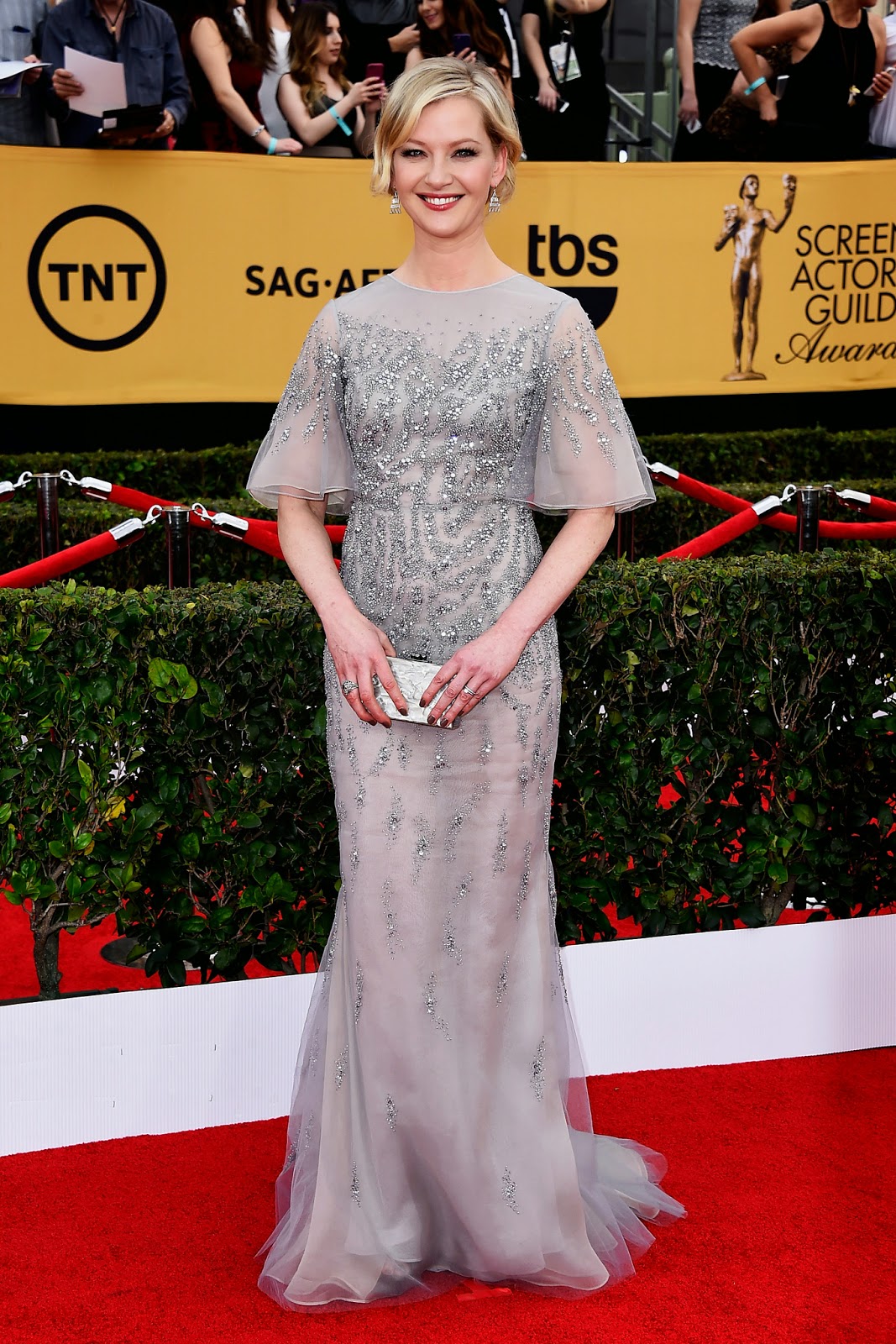 Gretchen Mol is on the 1930s-set Boardwalk Empire, so I thought her frothy platinum Dennis Basso gown was a great choice. She's always had a vintage vibe, so dressing old Hollywood works very well for her. 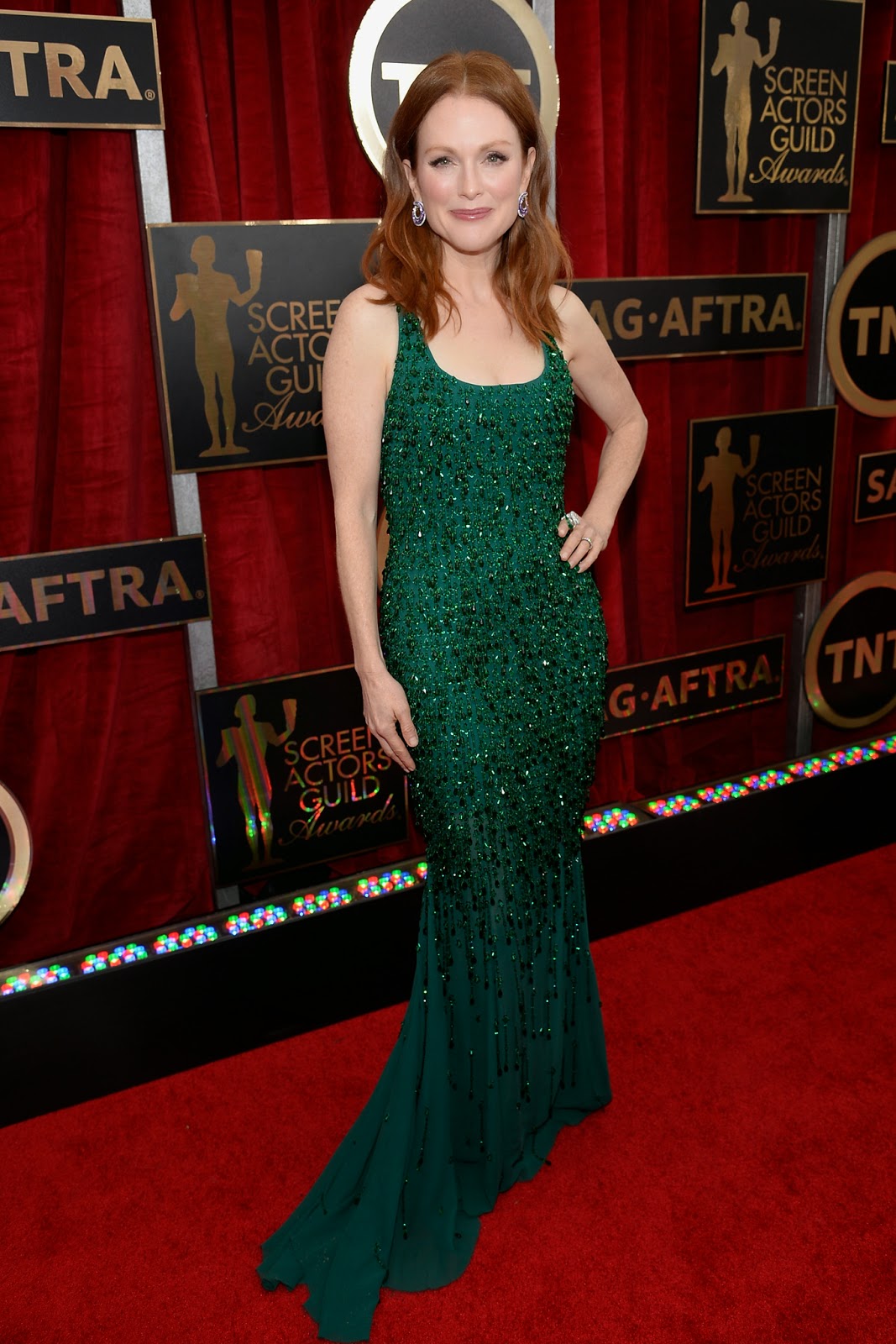 Julianne Moore's green Givenchy looks kind of boring and prom in this picture, but the beading was really pretty on screen. It fell like fringe, and nothing looks better on a redhead than green. 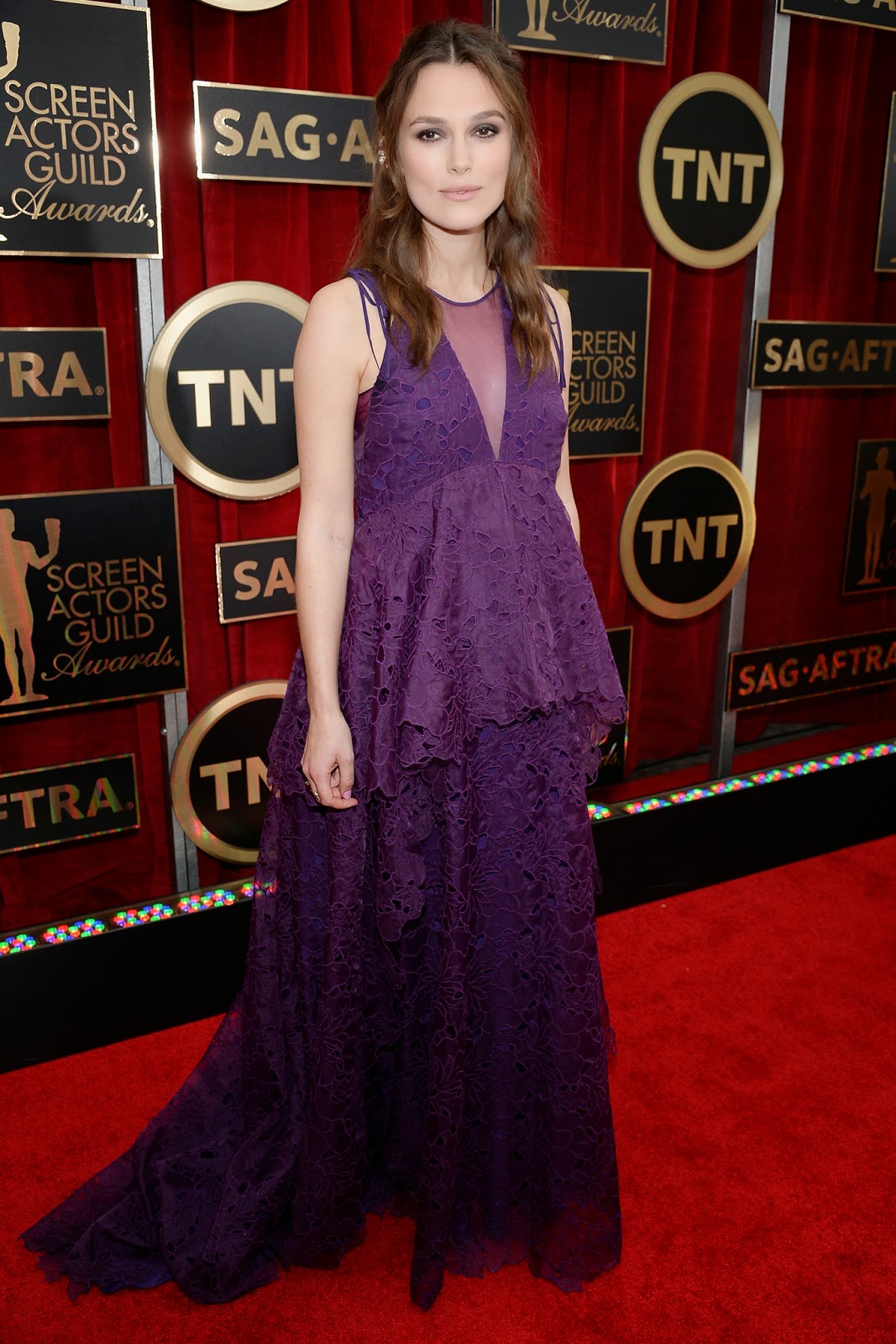 After having such an insane misstep at the Golden Globes, I was heartened to see Keira Knightley manage to balance pregnancy chic with edgy hair, make-up and jewelry. This Erdem gown is romantic, the color is gorgeous on her and it's sexy without being inappropriate. 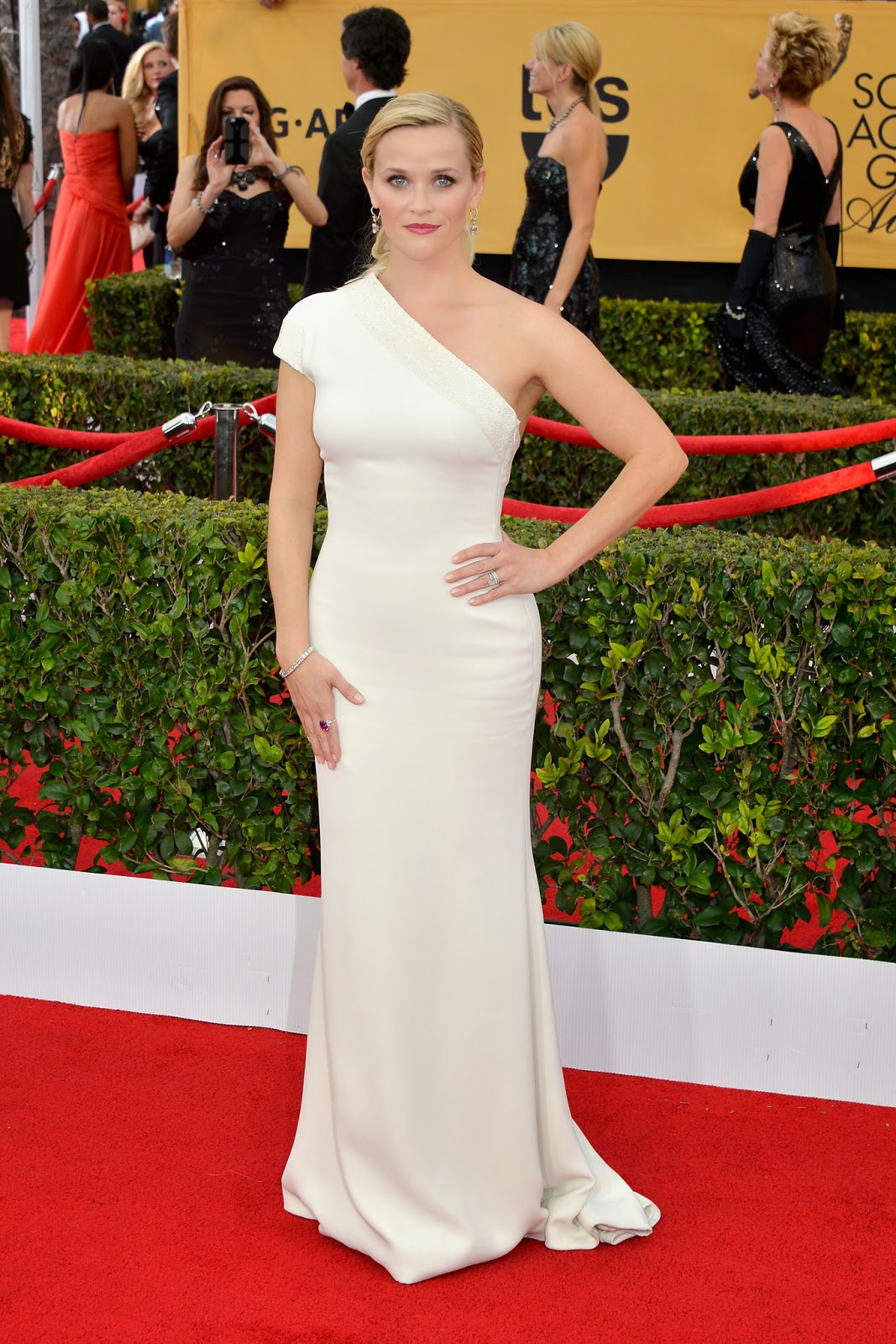 Reese has been loving very simple and clean dresses this season, no muss, no fuss. It suits her and only sets off her Grace Kelly good looks. This Armani gown is a great example of good tailoring and just the right amount of embellishment. I also thought her make-up was especially killer. 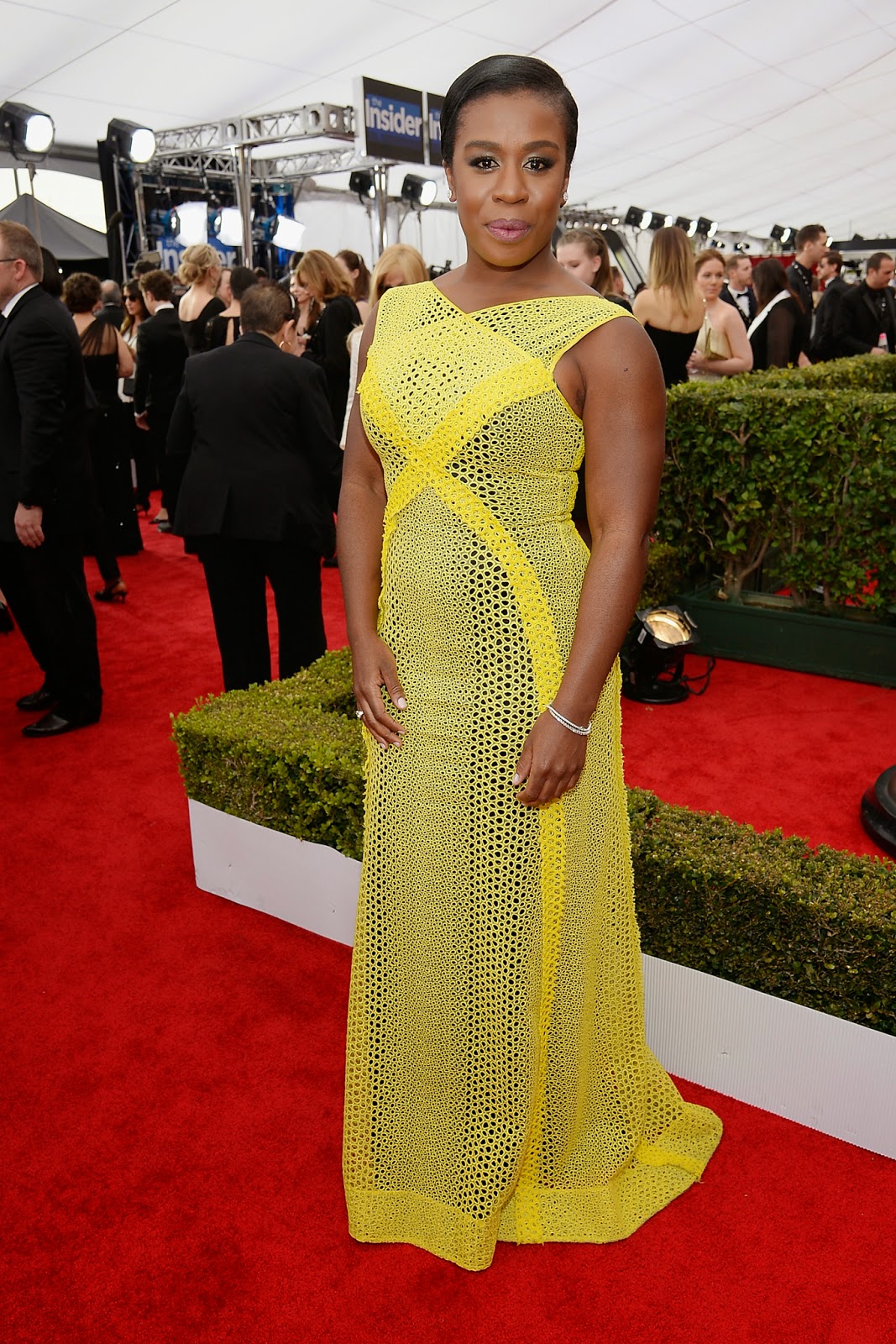 Major kudos to Uzo Aduba for rocking a color, pattern and texture that I pretty much would hate on anyone else but somehow works perfectly on her. Her Angel Sanchez seemed to match her spirit and personality, and it's always fun when that happens. 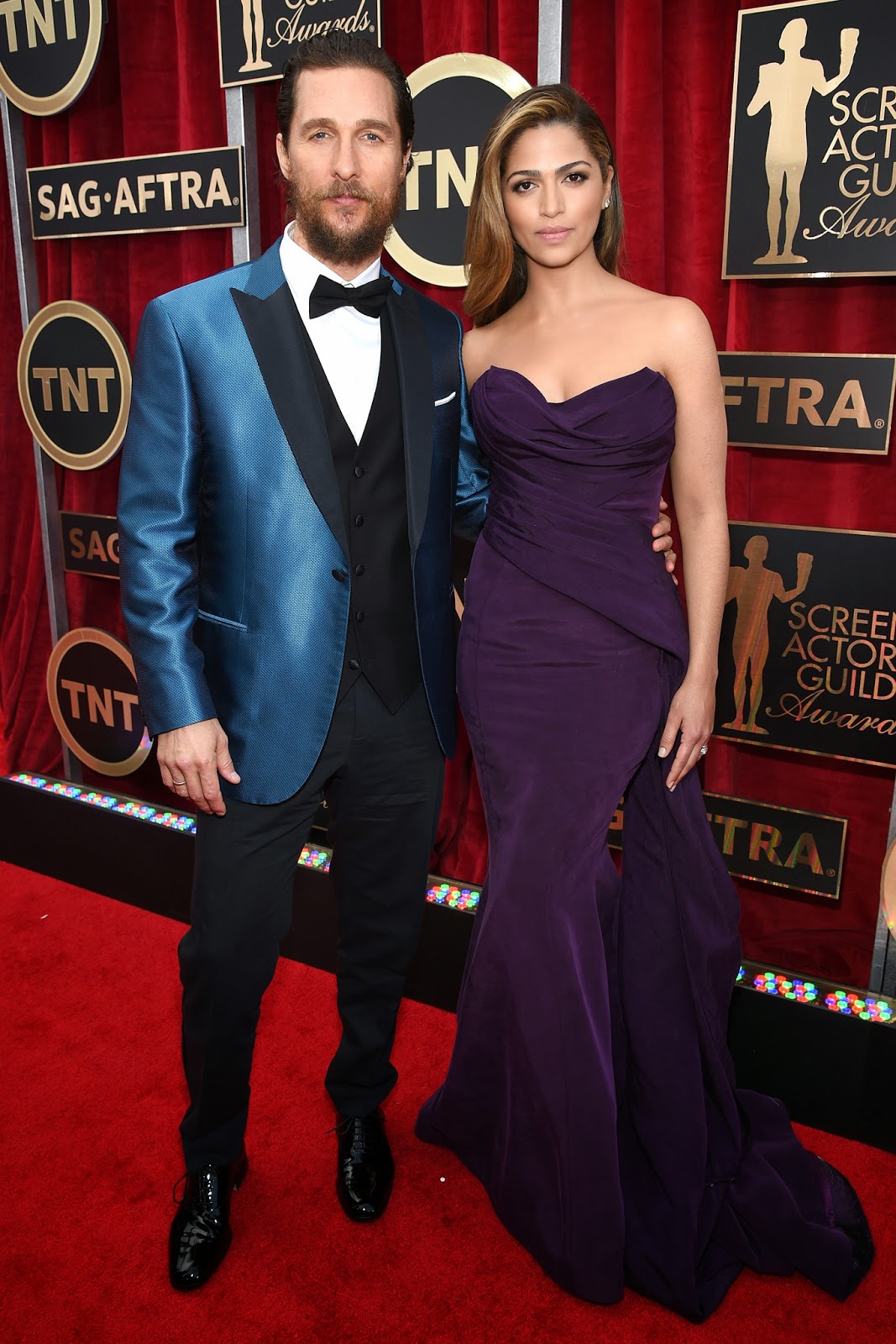 I just love the colors happening with these two, as a couple. By herself, Camila Alves would look good, but kind of safe. But together, they look like a magic icy jewel tone Las Vegas in the 60's couple and it's working for me.

I would probably hate this dress on anyone else, but this formal Zac Posen sundress works for a folk-singing harpist like Joanna Newsom. It's happy and pretty, and appears to have a tie-on cape? I'm diggin it. 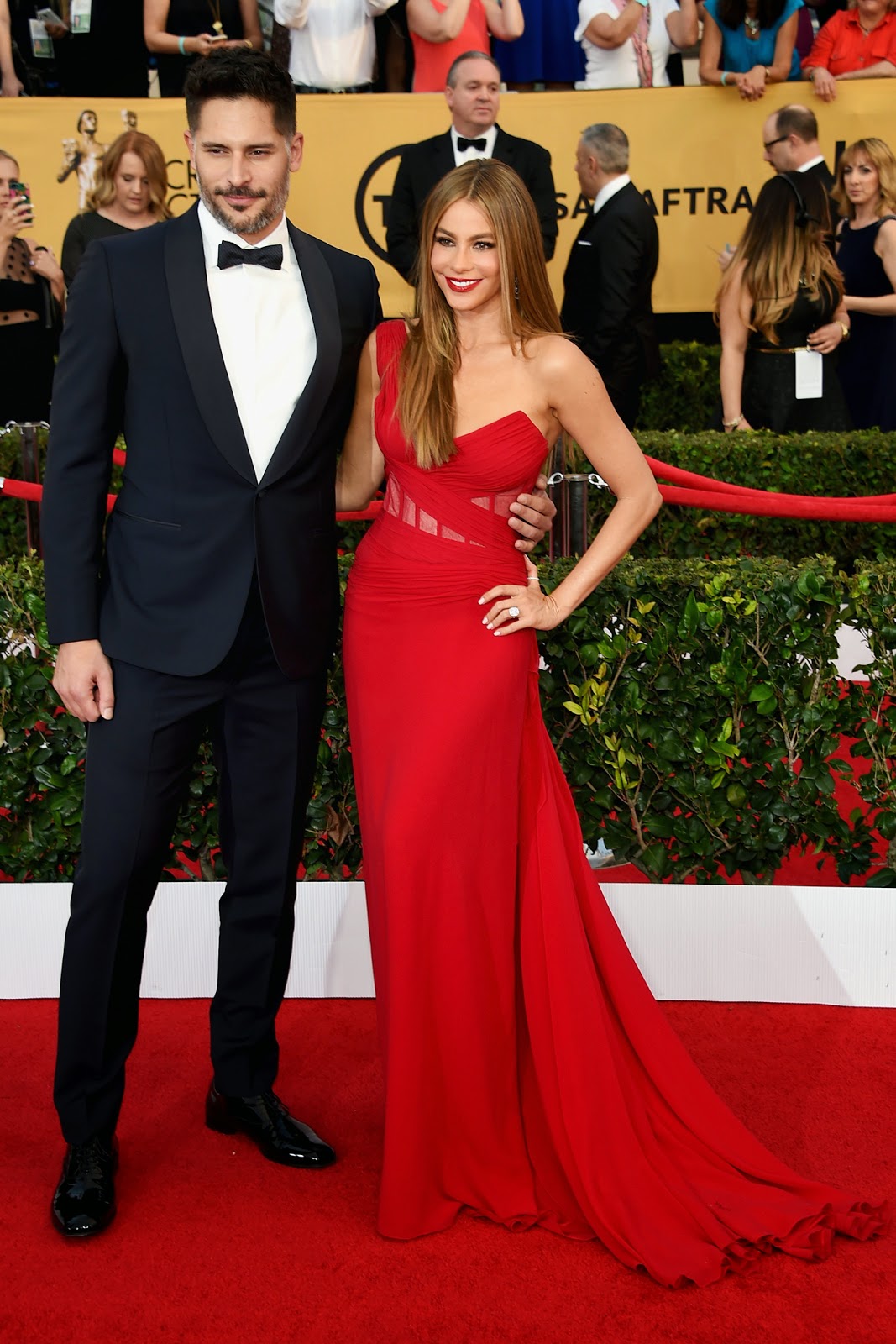 Honorable mention for the hottest couple there. Dayummmm. 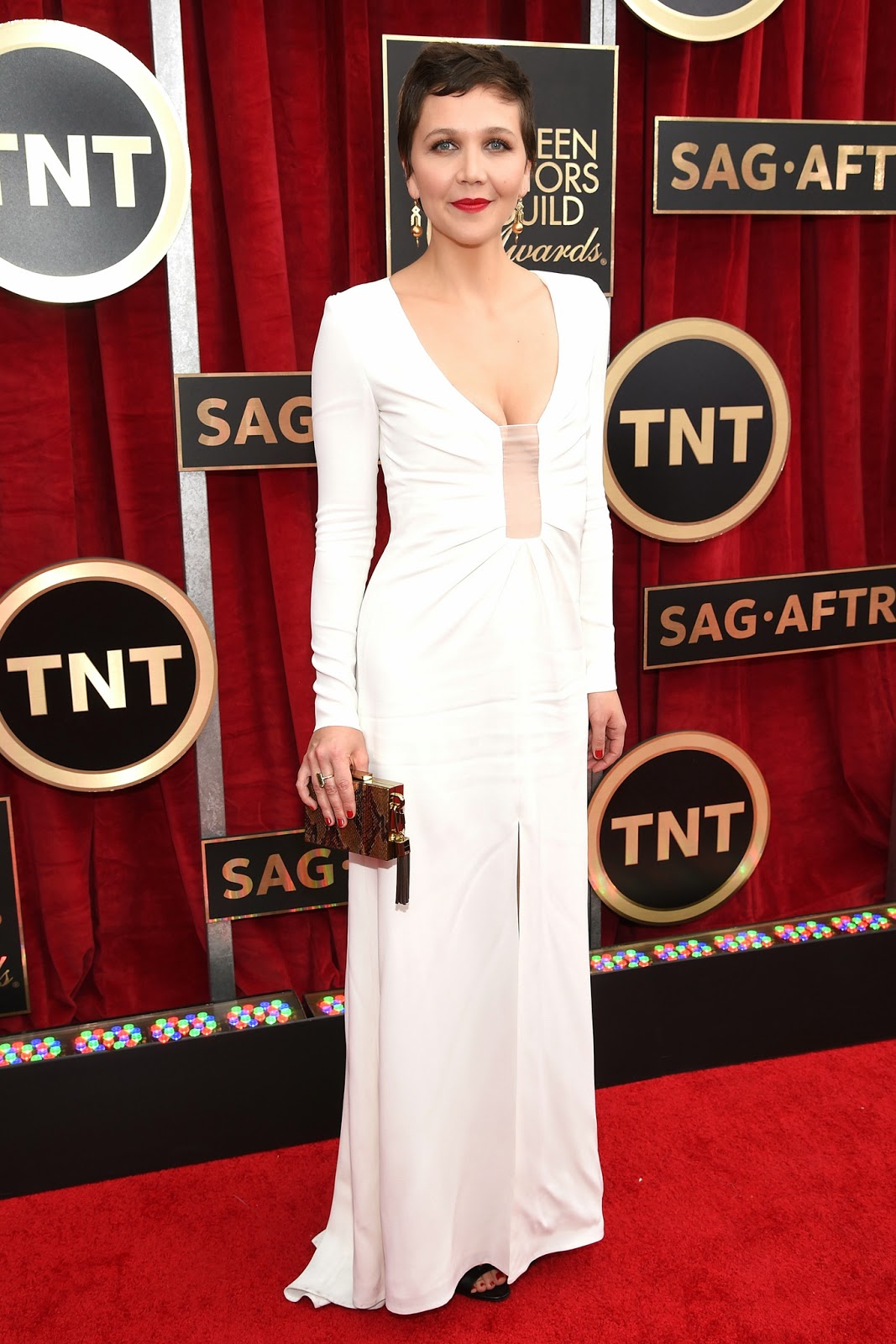 There were several dresses that I liked about 80% and Maggie Gyllenhaal's Thakoon was one of them. She's extremely unpredictable on the red carpet, which I enjoy, and I thought this sort of disco sexpot dress was fun and unexpected. BUT. It's not exactly flattering to her cleavage from this angle. I'm still calling it a win, though, on accessories alone. 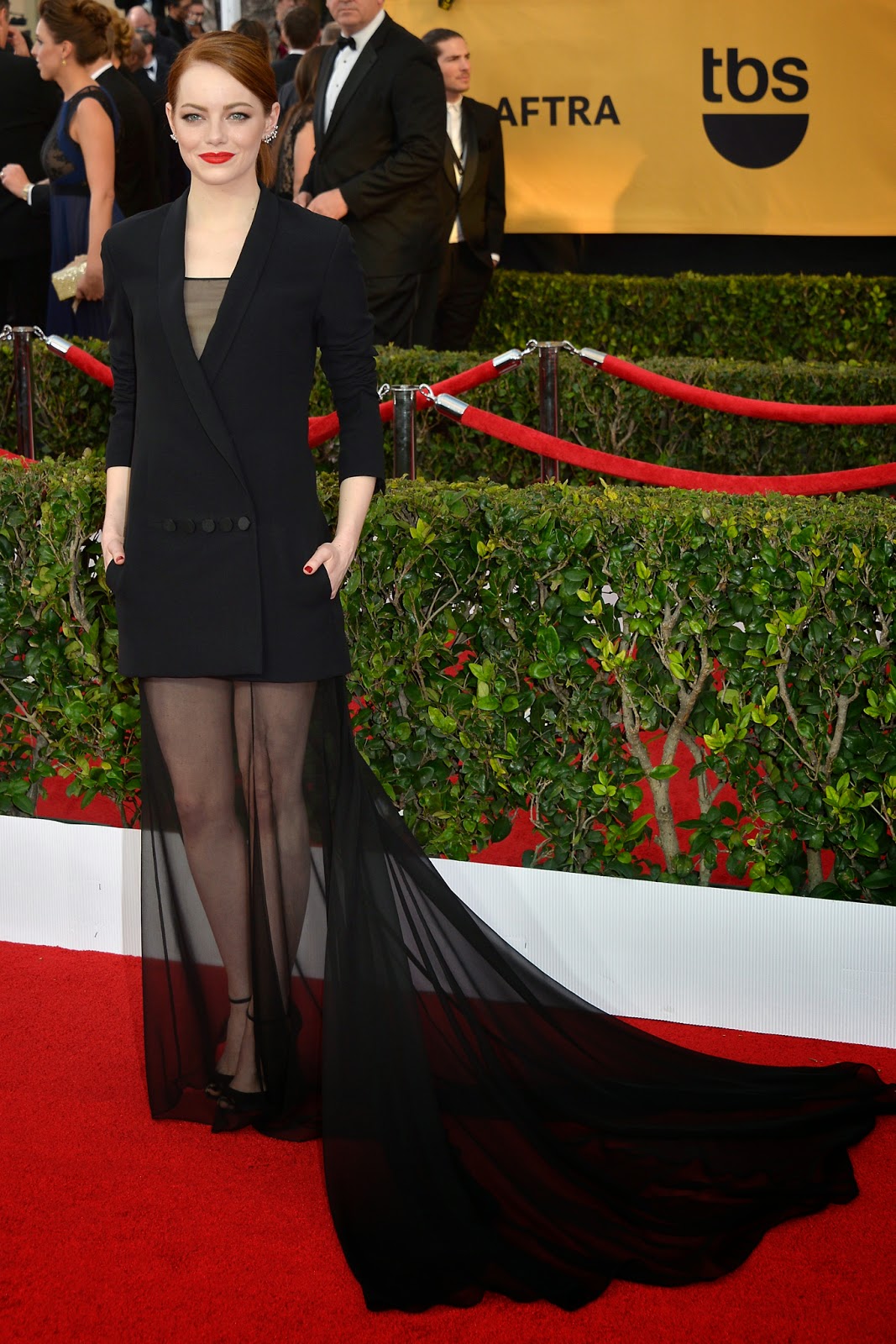 On literally ANYONE else, I would wonder what crack pipe they were smoking when they decided to wear a sheer curtain under a man's tuxedo jacket. But for some reason, Emma Stone's Dior Couture gown almost seems to be working. A big part of it is her confidence and pitch-perfect accessorizing...a bold red lip, red nails and edgy ear cuff made it sing. It almost seems like her role as Sally Bowles on Broadway has rubbed off a little, and that's not an entirely bad thing. 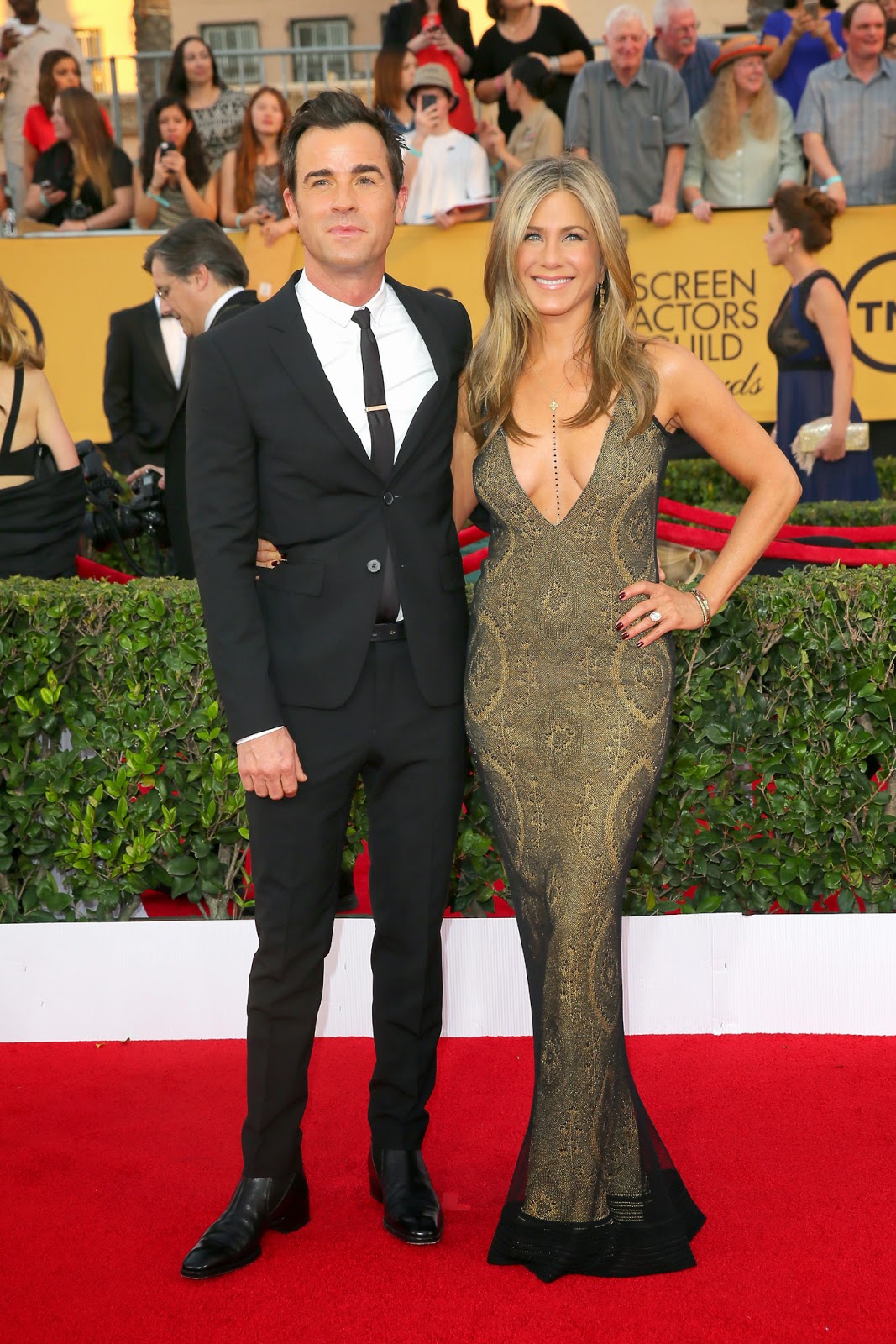 I'm always bitching at Jennifer Aniston to stop wearing really basic black dresses and zhush it up a little, so I can't complain about her vintage John Galliano sex machine gown. She looks very hot to trot, and I was (as I'm sure many male viewers would agree) captivated by the suggestive necklace. BUT....the dress feels a little 90's J.Lo and I'm honestly not sure if I actually like the pattern at all. 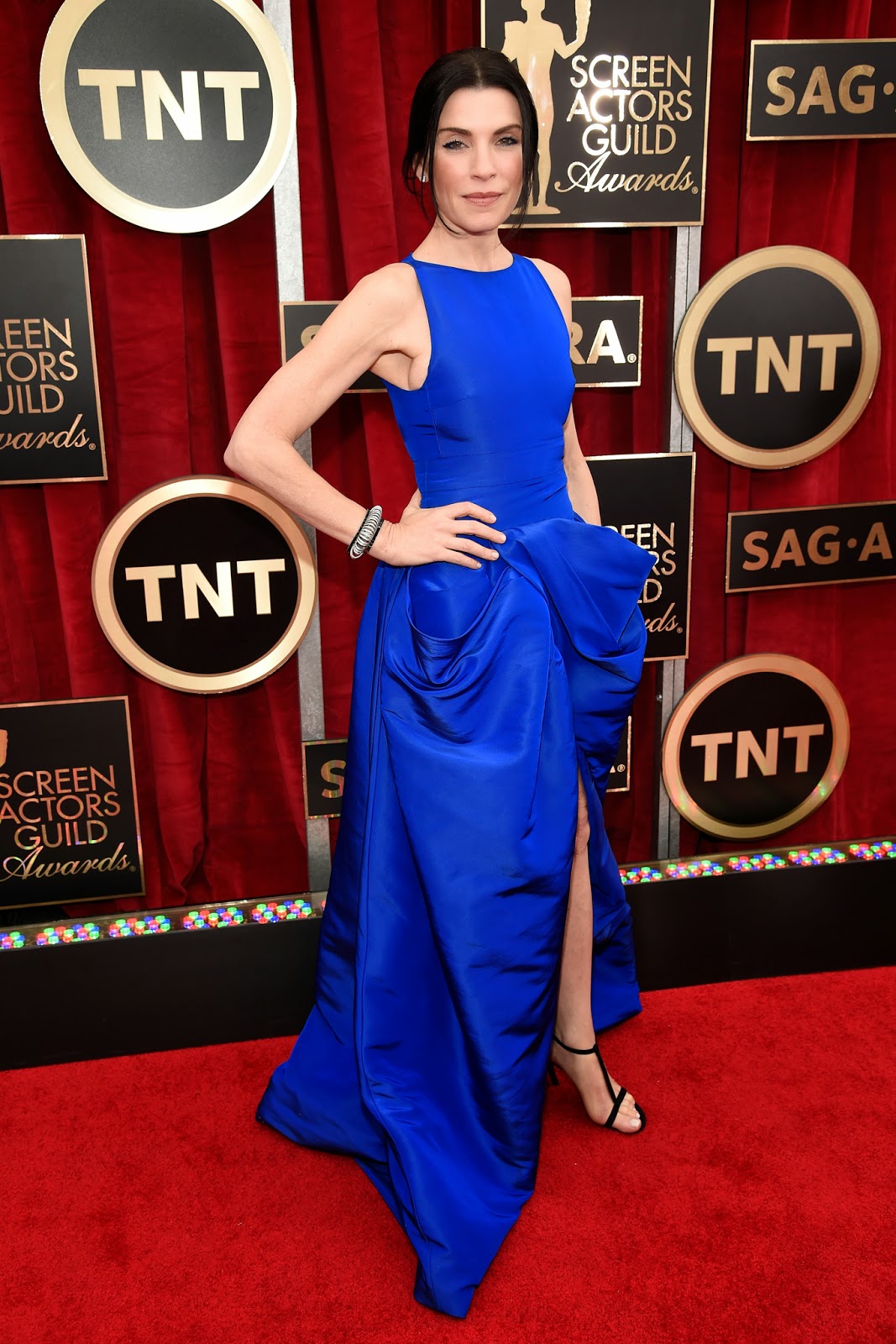 I really, really want to like Julianna Margulies' Giambattista Valli gown. The color is a slam dunk. I like how it plays with volume. I like her hairsdo, and her cuff bracelet. The fit is great. But I feel like the draping of the folds seems almost half-hearted, like Valli said, "ughhhhhhhh I guess I could pin this here, or something." You could store basketballs in the sides of her dress. The glimpse of sideboob also makes it look like her chest is trying to make an escape through her armhole, just trying to get some breathing room wherever it can. 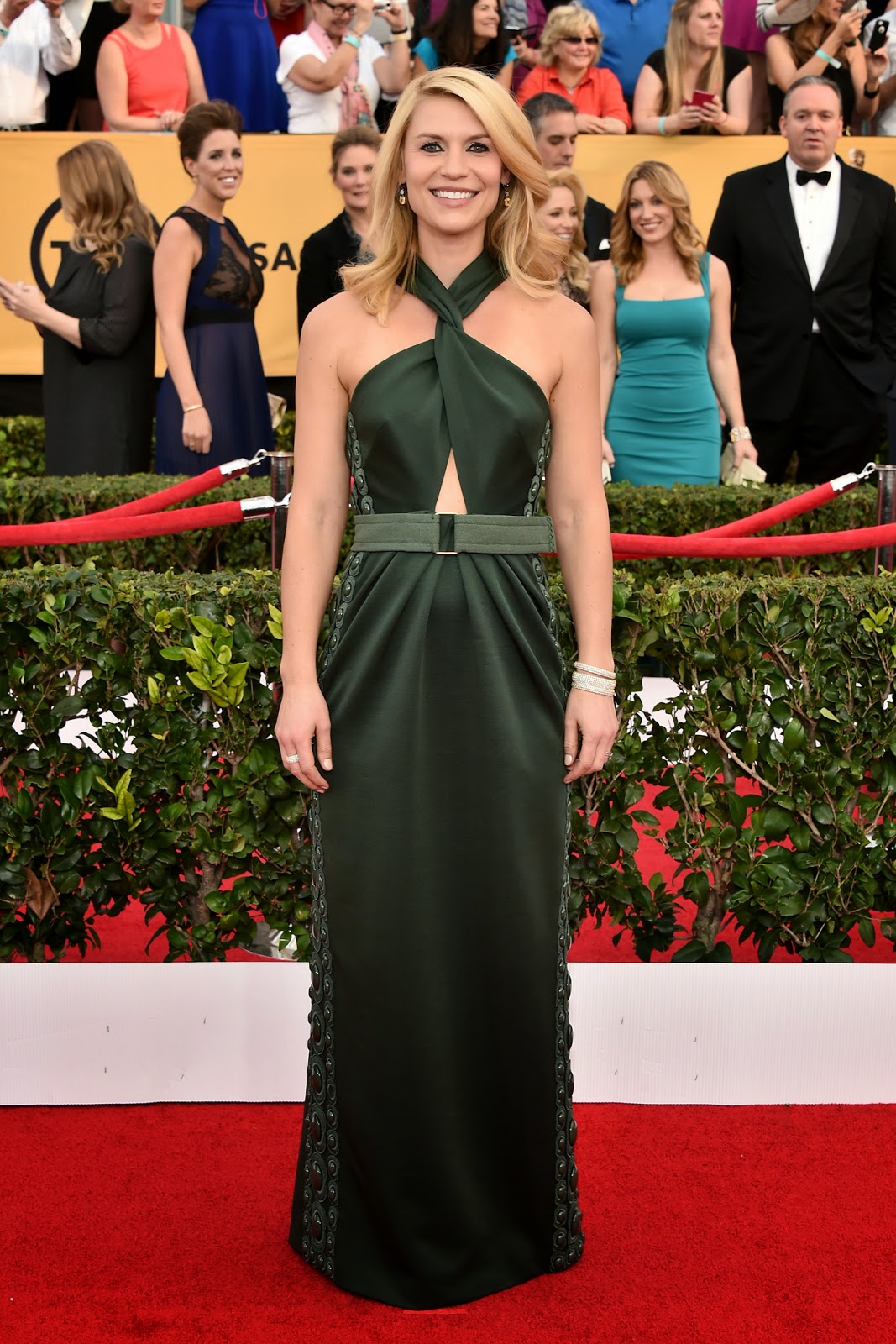 This neckline is seeming very trendy this awards season, and I certainly like it. I think I like this Marc Jacobs gown in every way except the Army-style belt. It's throwing the whole thing off for me and feels incongruous. I'm guessing that's how it was presented on the runway, but so many things that look awesome in the context of a runway presentation just look awkward in real life. 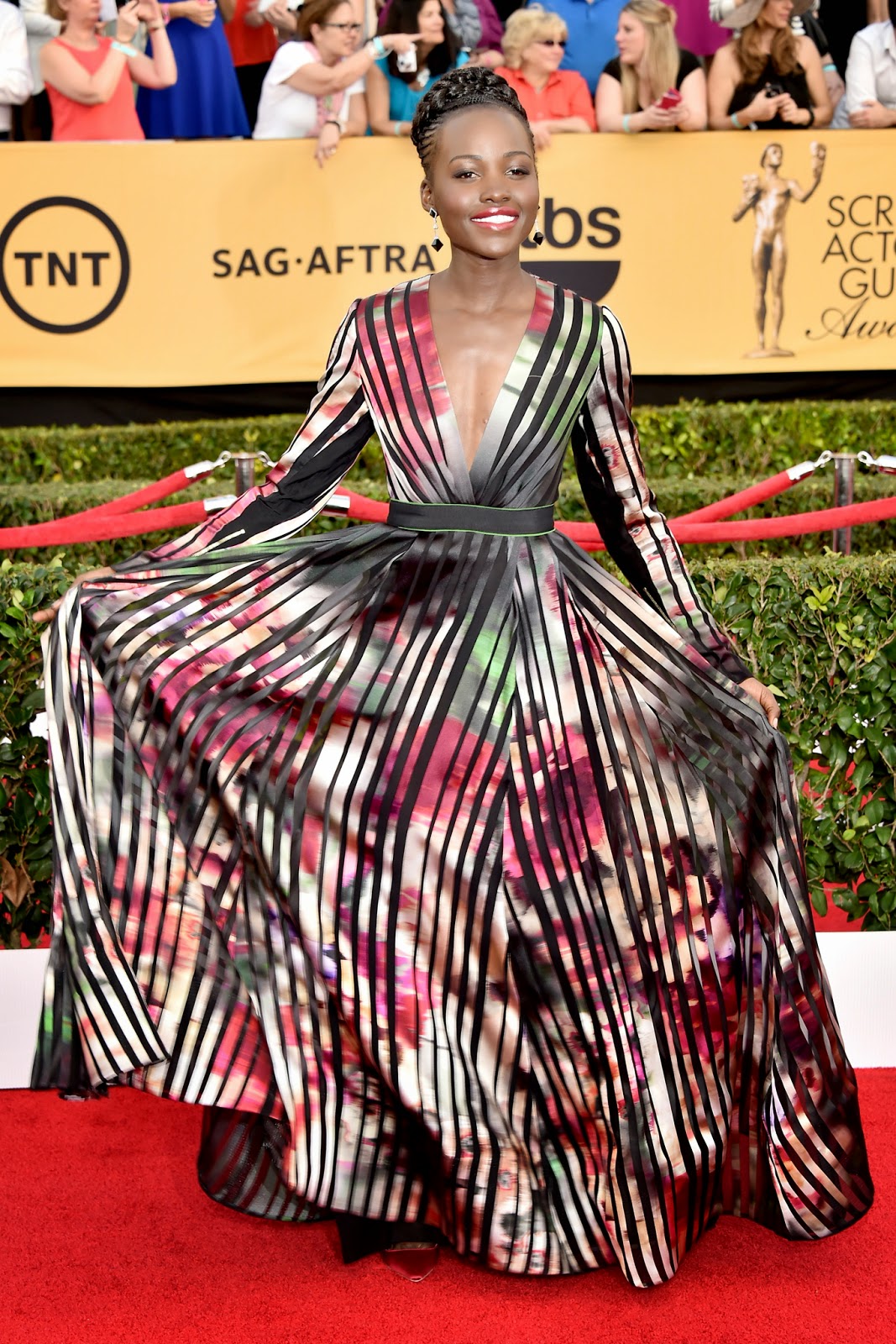 I honestly don't know how I feel about Lupita Nyong'o's Elie Saab gown. Kudos to her for taking a risk. I don't usually have a problem with sleeves or stripes or flowers. I think the colors look nice on her. I just feel like it isn't quite working; it almost looks like a dress from a couture line inspired by Beetlejuice. 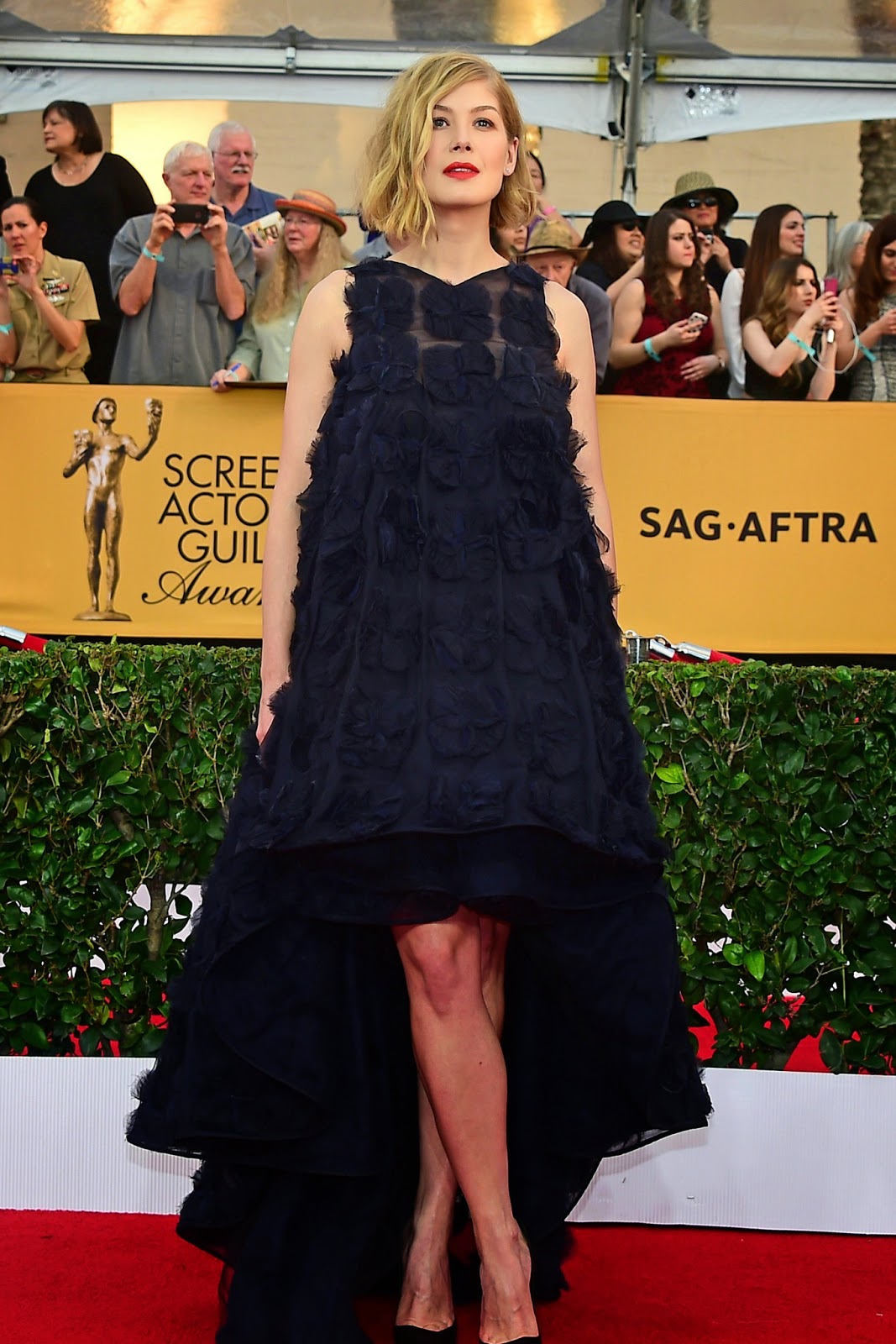 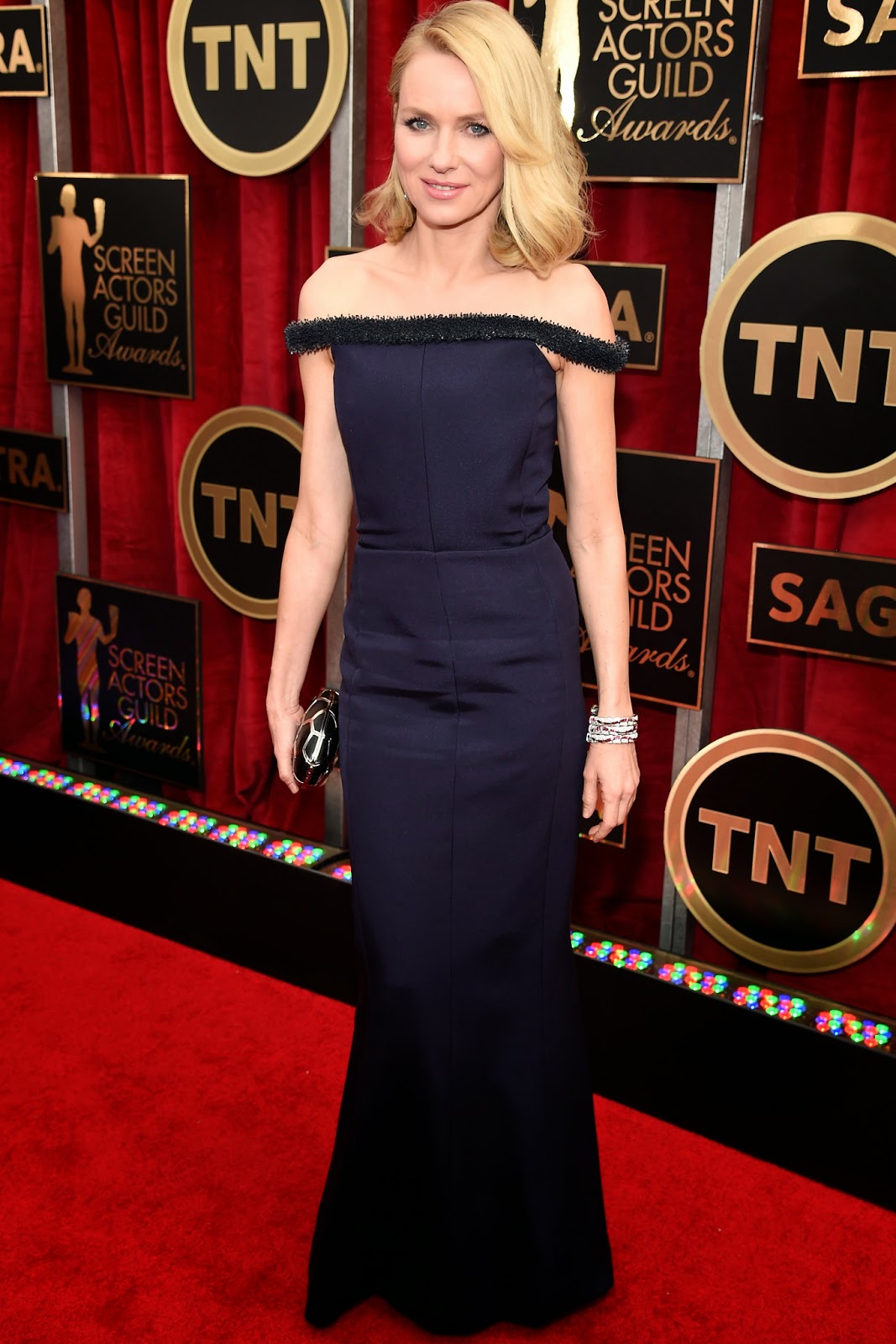 Naomi Watts appeared in her simple Balenciaga gown and I said... 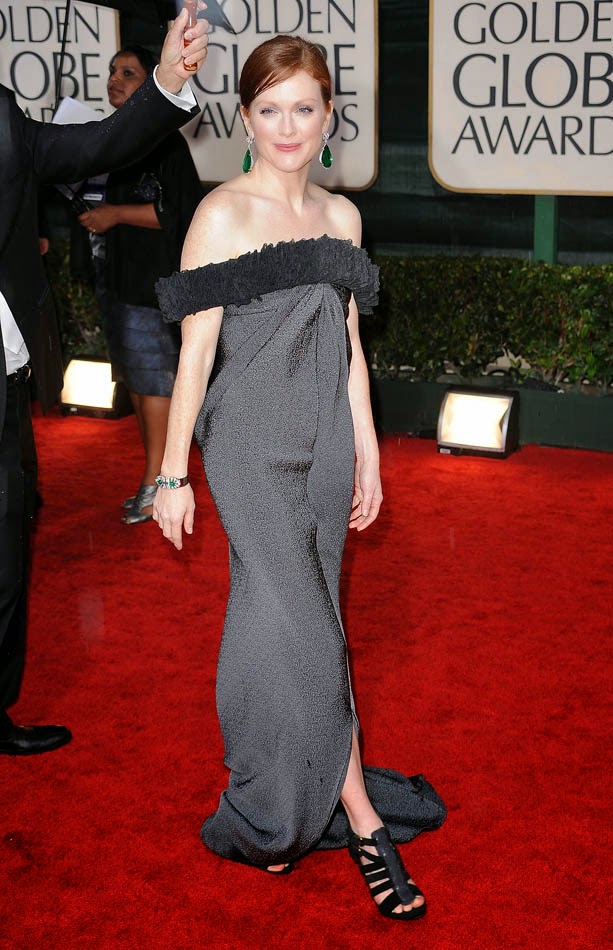 I didn't like it on Julianne Moore in 2010...why would I like it now? AMBER NEVER FORGETS. 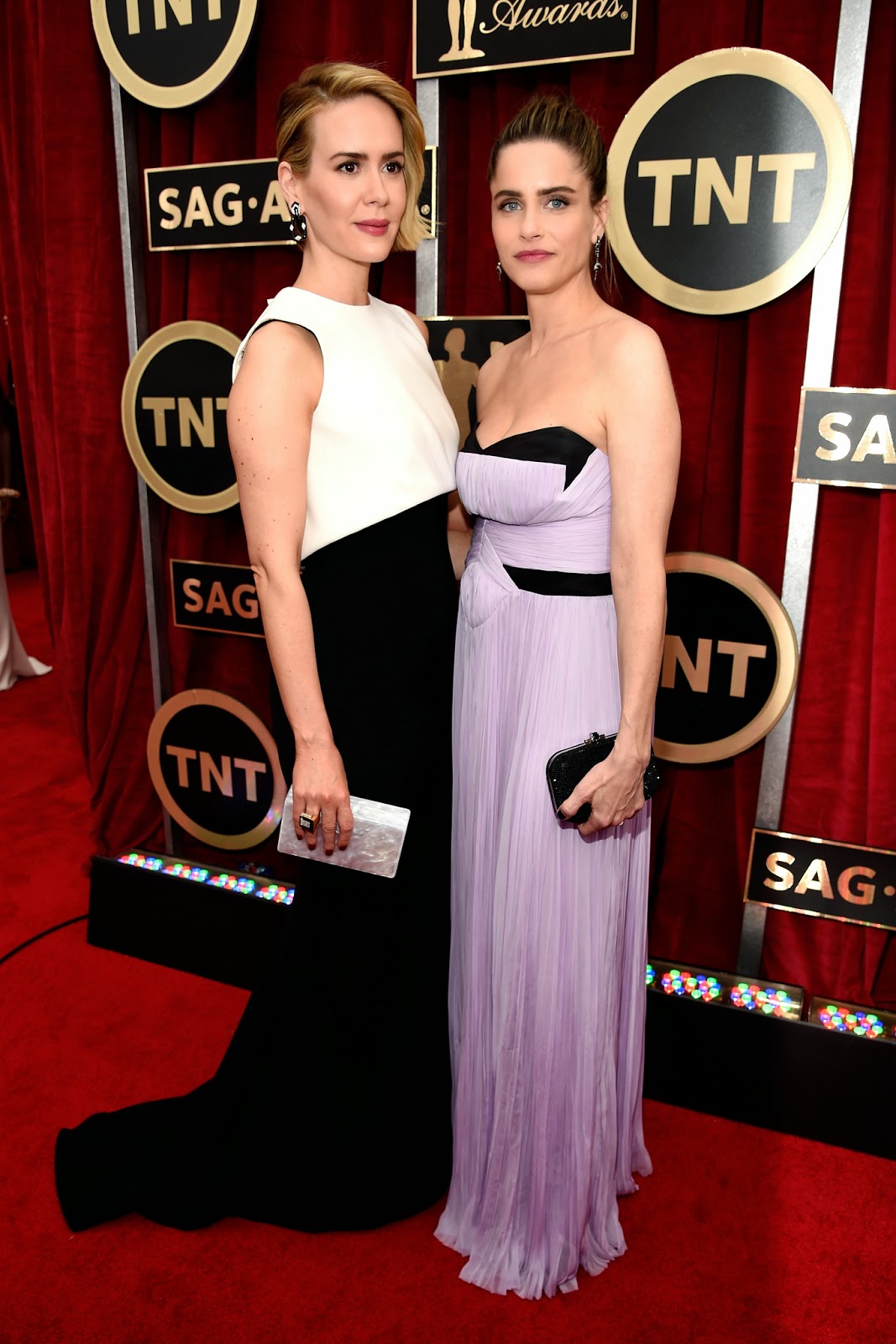 Amanda Peet seems to be striking out more and more lately. The design of this J. Mendel gown is just doing her bust NO favors. I would dare say the majority of us look moderately okay to terrible in strapless gowns, but it doesn't help when the design of the gown divides your boob area into a variety of strange geometric shapes.

I cannot even explain why, but the bodice of Anna Chlumsky's Escada gown reminds me of a model of female anatomy. If it were maybe any other colors, it might work. The cut is okay, and the fit is great, but the pairing of oyster and rust was giving me serious Star Trek and Battlestar Galactica vibes. 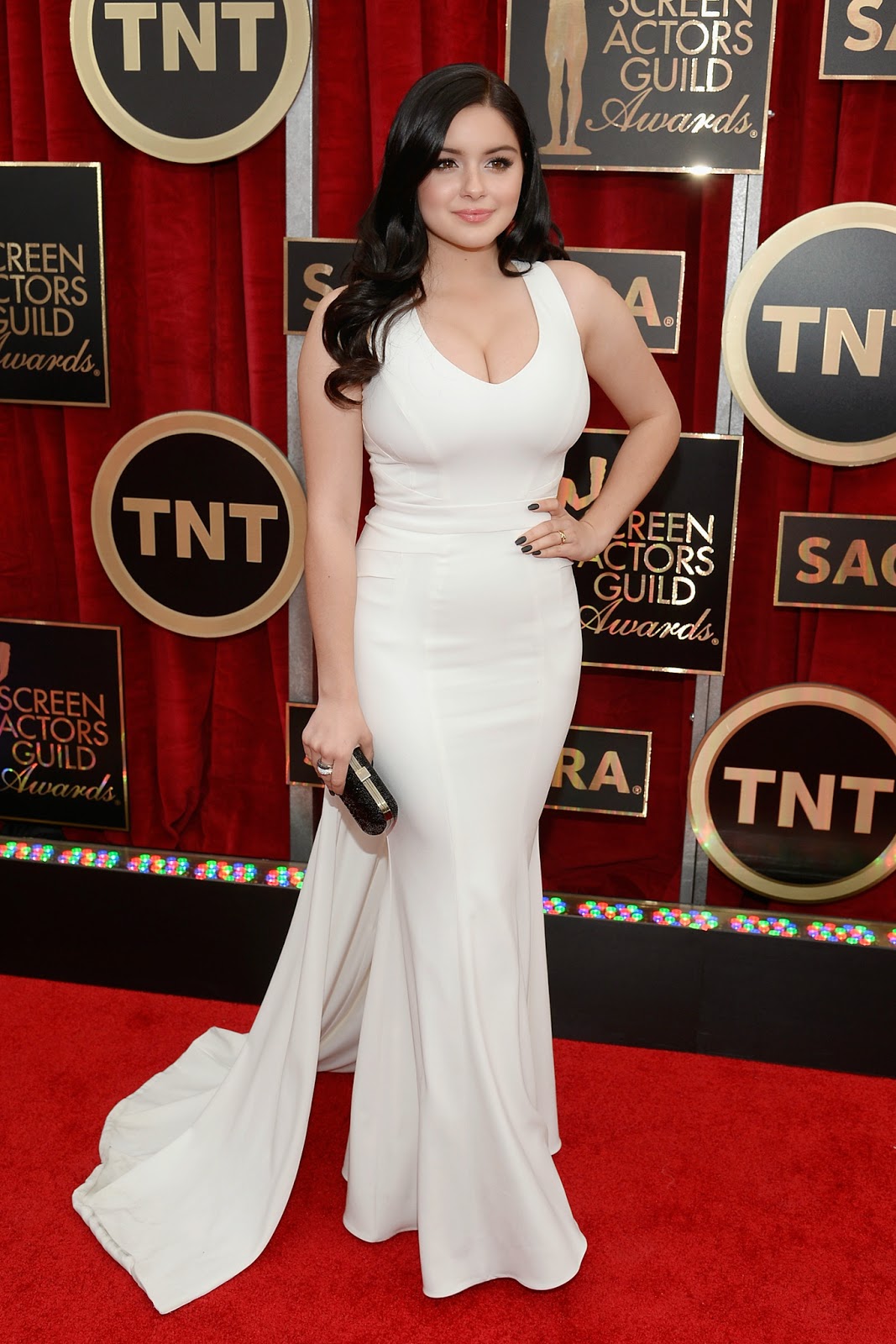 Being a large-chested lady myself, I sympathize with the plight of 16-year-old Ariel Winter, who is quite well-endowed at a young age and probably really doesn't know what the hell to do with those things. Still, she's been dressing too mature for YEARS now, and I'd love to see her get a stylist who knows how to accentuate her curves without dressing her like she's 47. 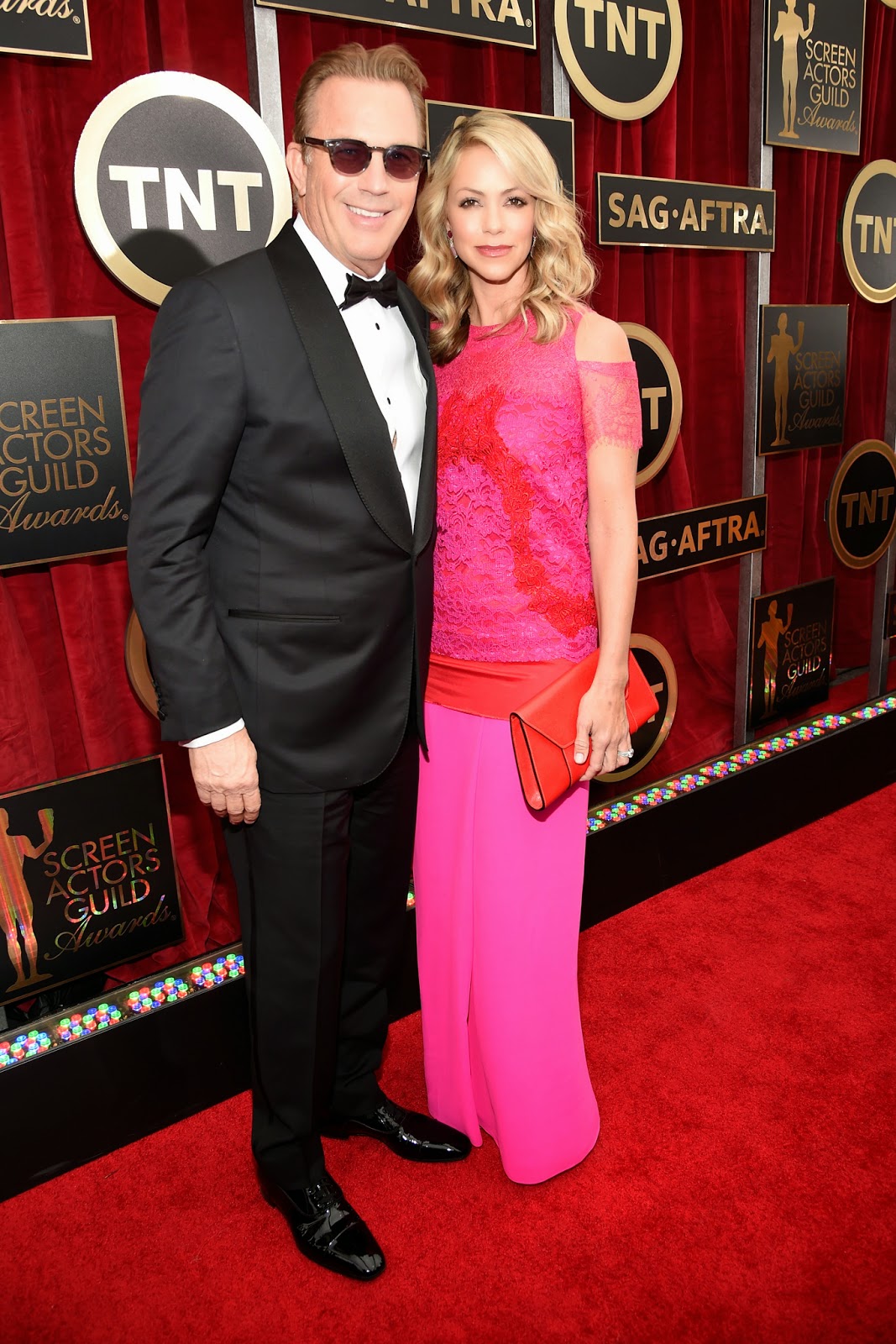 I don't know who designed Christine Baumgartner's gown, but I can only assume it's a valentine she whipped together herself from a series of nighties.

The Big Bang Theory's Melissa Rauch also came dressed as an ugly valentine. Hers was created by Pamela Rolland. It's probably satin or taffeta, but it looks like painted paper on the bottom. Not good. 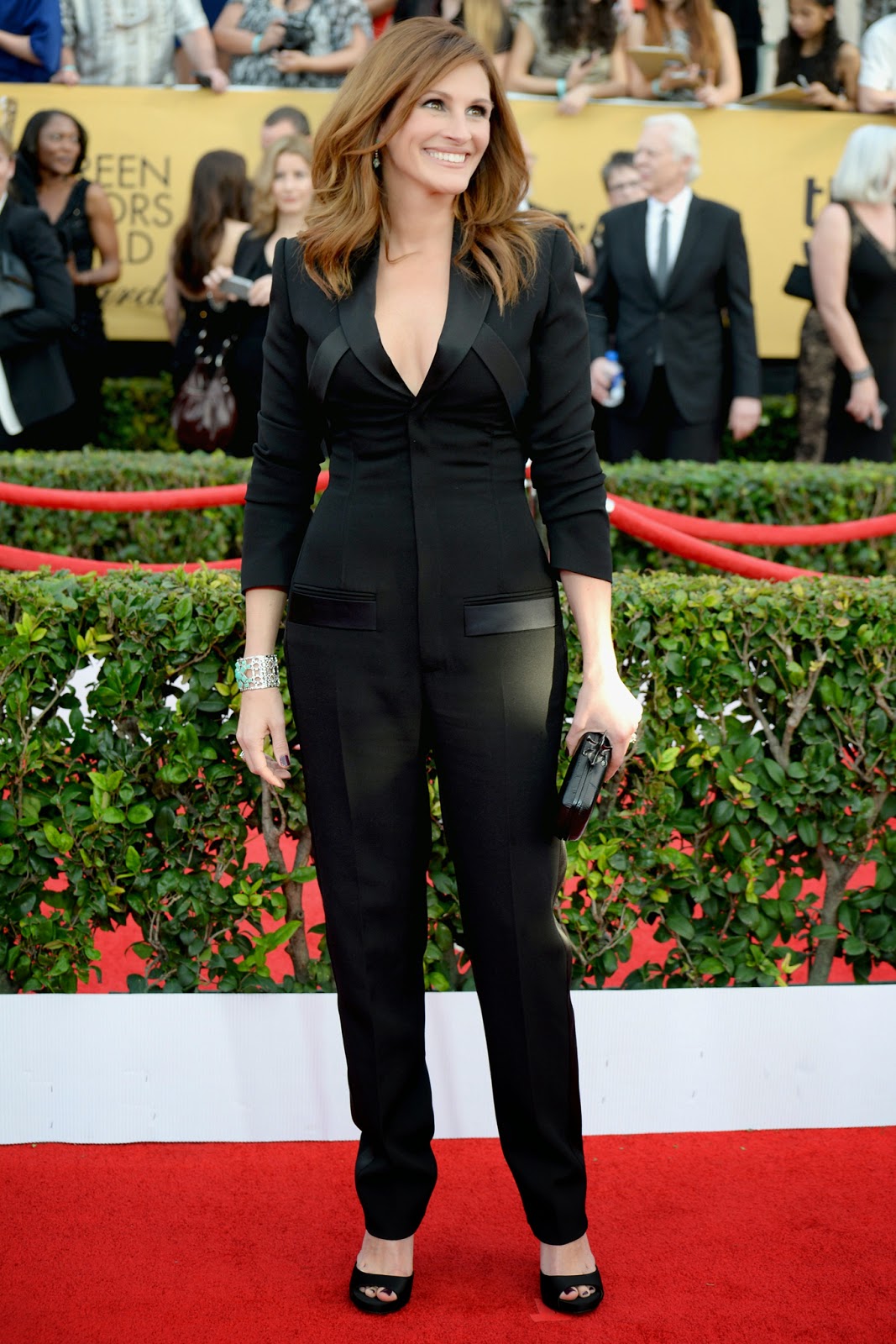 JULIA. I thought we talked about this last year! Formal catsuits are not how we're going to handle the aging process. Someone get her on the phone with Helen Mirren, ASAP. If Jennifer Aniston (45) can walk around all hot-to-trot with necklaces dangling between her boobies, Julia Roberts (47) doesn't have to wear sexy courtroom onesies. 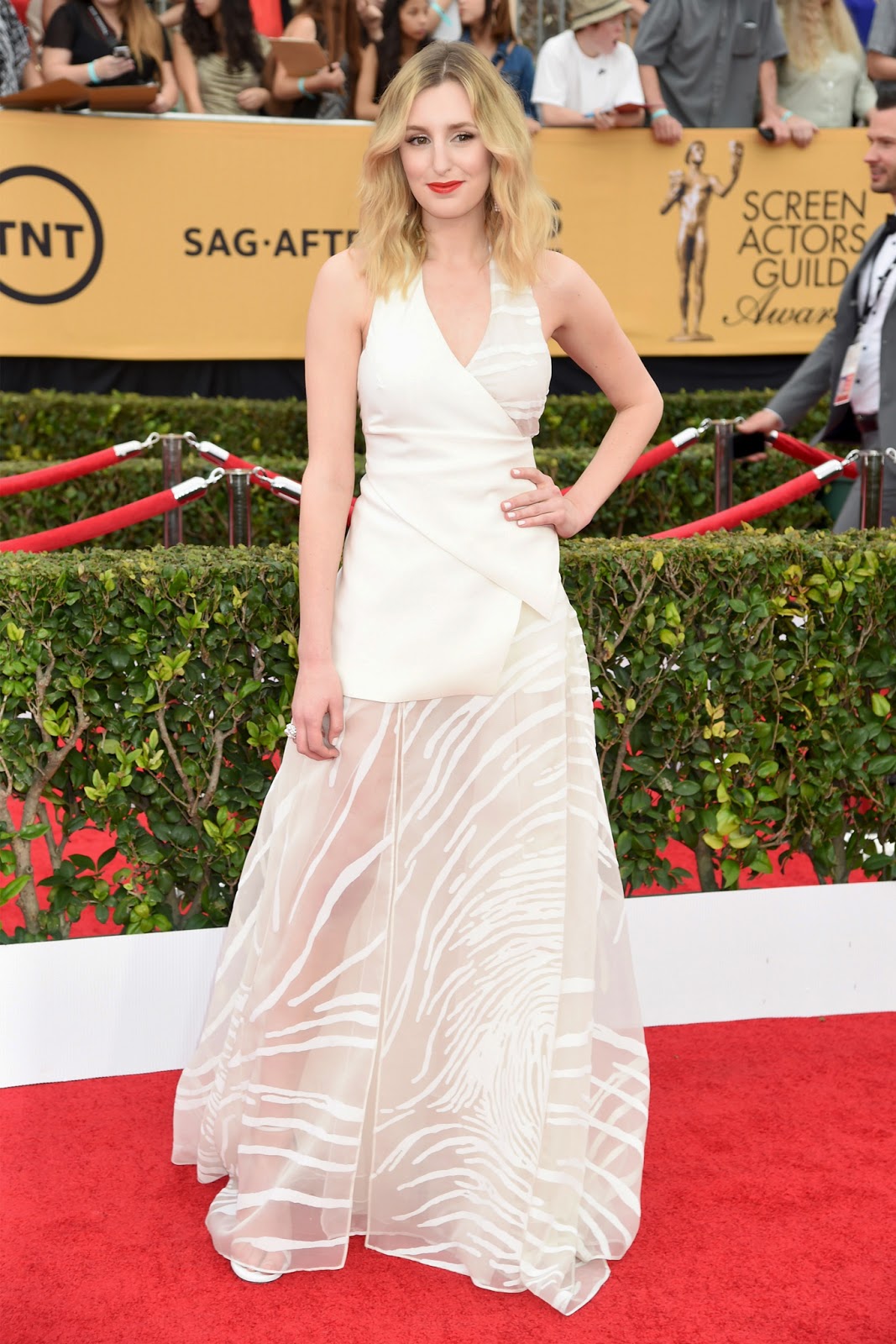 Poor Lady Edith is also a repeat SAG carpet offender. Her Vionnet looks at best like a very fancy sheer zebra stripe envelope and at worst like a spring roll with little shrimp inside. I think she was going for edgy and ethereal, but it just has me craving Thai food.
Posted by Amber at 9:00 AM

you crack me up. a spring roll with a little shrimp? I DIED. you’re so right.

I do like the Elia Saab dress but it looks like it just came from a mass murder.