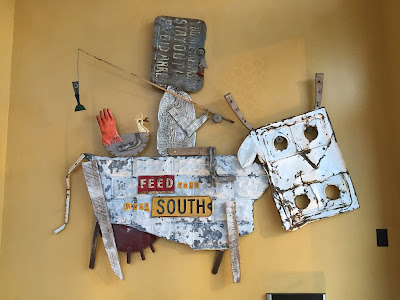 It is very rare that I love food at a restaurant so much that I want to buy the cookbook, but that's what happened the first time I ate at Tupelo Honey in downtown Asheville back in 2011. Their sophisticated and inspired takes on Southern classics was completely satisfying and it's not surprising at all that they were able to build on the name and turn it into a fast-growing franchise across the South. So when I received an invitation to attend one of their soft opening meals this week at the new Tupelo Honey Virginia Beach before they officially open, I was all on board and invited Ashleigh for a night of stuffing our faces.

Although the atmosphere and venue is a far cry from the downtown charm of the original location, it's still a great addition to the Virginia Beach Town Center food scene. It's a beautifully designed restaurant with local touches, like the found metal sculpture by one of my favorite local artists, Sam Hundley. 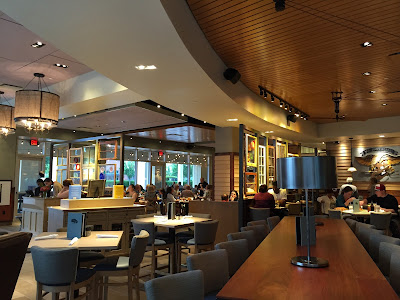 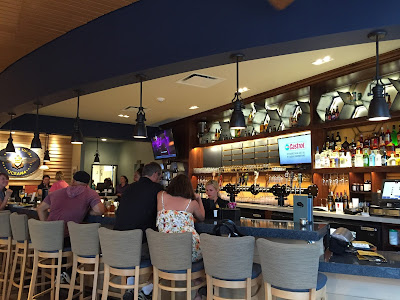 Everyone got to select from a limited sample menu. In an effort to try as many different things as possible, Ashleigh and I planned to get all different dishes and share everything! 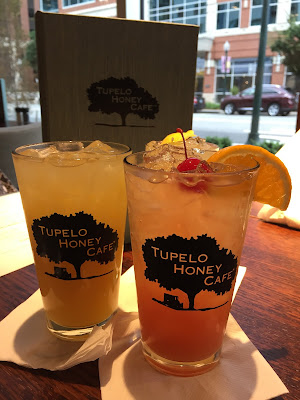 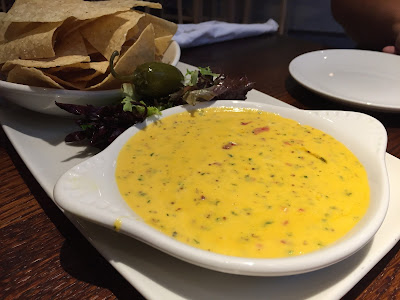 For our starter, we tried the warm pimento cheese. It was more like a queso than we expected, but I was all about it. It definitely had the distinctive flavor of pimento cheese and was a great consistency — not drippy, but not too thick. 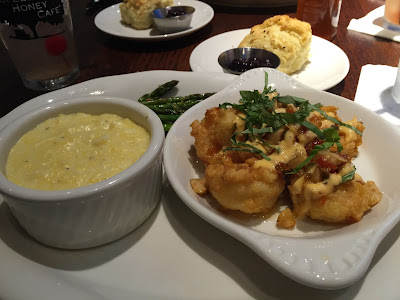 For our entrees and sides, we had the Jumbo Shrimp, fried and served with a cherry pepper lemon aioli that is to die for. This was absolutely good to the last bite and could easily give Bonefish Grill's Bang Bang shrimp a run for its money.

Tupelo Honey excels at transforming simple sides into special dishes in their own right. The goat cheese grits were insanely good. I think Ashleigh and I would have licked the ramekin if we thought no one was watching. The Benne Asparagus (coated with sesame seeds) was also good, although not quite as world-rocking. 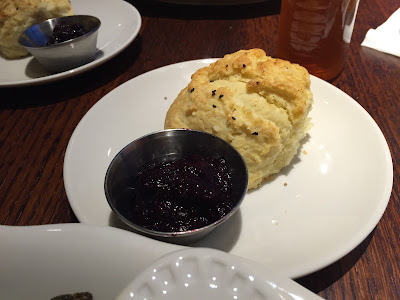 One of my favorite things I had at the original location were the Ginormous Biscuits with blueberry compote and although these are certainly different, they did not disappoint. The sweet blueberry compote with the buttery biscuit is just perfect. 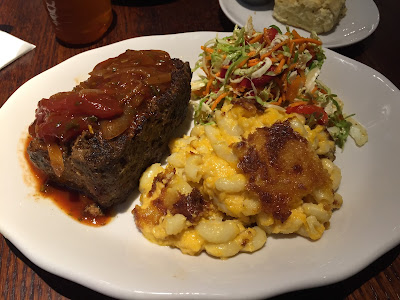 Ashleigh ordered the Beef and Bacon Meatloaf topped with the restaurant's signature rosemary shallot gravy. It was perfectly seasoned, with the bacon adding a smoky flavor to the classic dish and the tomato gravy a great substitute for ketchup. It's not as sweet as the typical ketchup-covered loaf, but that's a good thing.

We also had the shaved brussels sprouts, which would be a wonderful item to add to your potluck/picnic recipe list. But enough about that because:

THE MAC AND CHEESE IS SO LEGIT. IT'S ONE OF THE BEST I'VE EVER HAD, PERIOD, ANYWHERE.

Seriously. Next Tuesday is National Mac N Cheese Day, so I suggest you celebrate accordingly. 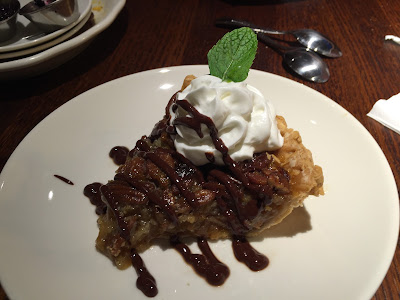 Although we barely had any room left in our bellies, we had to stuff the slice of Brown Butter Pecan Pie drizzled with chocolate ganache down our gullets. The brown butter flavor really elevated this above the usual pecan pie and the addition of chocolate was brilliant.

All in all, it was a freeloading feast that left us already making plans for our great return to have the Appalachian Egg Rolls I've been craving for four years and more mac and cheese. The downtown old-timey Appalachian character of the original restaurant may not quite translate, but the important part — the food — made the trip and I'm excited to have a piece of my mountains here by the beach.
Posted by Amber at 9:30 AM

Email ThisBlogThis!Share to TwitterShare to FacebookShare to Pinterest
Labels: eating out, hampton roads

What a wonderful post, Amber! Thanks so much for the mention. Lynn and I are really looking forward to heading out there on the 15th.