Asheville is one of those towns where food is serious business. The city was at the forefront of the farm-to-table revolution, and the restaurants are proud to tell you exactly where that ear of corn comes from. We ate good while we were there. Here are some pics (and restaurants with the Amber seal of approval!) if you'd like to see: 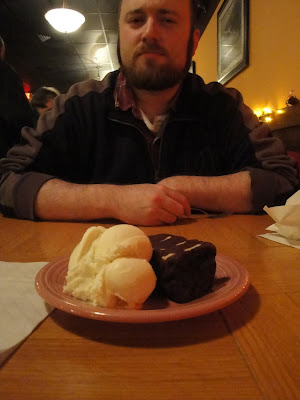 Almost every time we've been on a trip, Sean has wanted to get pizza on the first night. He did some Googling and found Marco's Pizzeria. We love to venture into neighborhoods when we travel, so it was nice to eat amongst locals. We had frangelico ice cream... 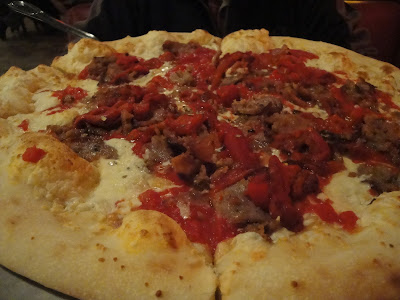 and sausage and red pepper pizza. 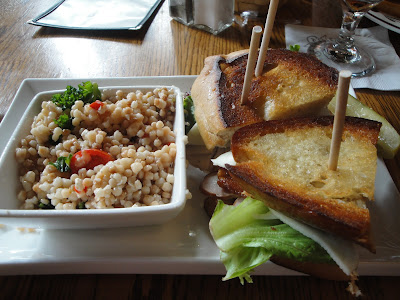 Biltmore is a bit of a history Disneyworld, and I was concerned the food would be overpriced hot dogs, but was pleasantly surprised by the fare at the Stable Cafe. I had a delicious turkey sandwich with pearl couscous. The sandwich had an awesome berry dijonnaise that totally made it. 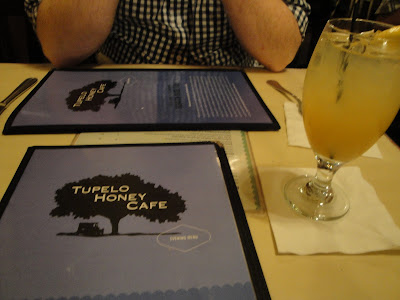 EVERYONE told us we had to eat at Tupelo Honey Cafe, which is kind of like a modern interpretation of what I imagine the Whistle Stop Cafe is like in Fried Green Tomatoes (which are, indeed, on the menu). Our meal was good enough that I left with the cookbook and I'm going to force you to relive it with me.

I had Jamie's rosemary peach lemonade with vodka, which was sooooo good and on my list of things to try making at home. 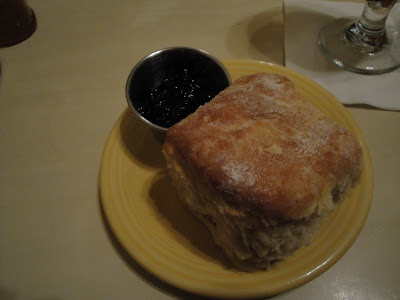 They gave us the biggest biscuits I've ever had, with delicious blueberry preserves. Even though I knew a lot more food was coming, I ate every last bite of that biscuit. 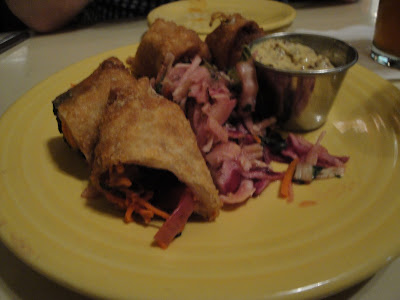 My favorite part of the meal (which is unfortunately not in the cookbook) were the Appalachian Egg Rolls. Sean and I devoured them! They have pulled pork with a sweet jalapeno sauce, pickled onions, shredded carrots and braised greens, with a side of mustard dipping sauce. My mouth is watering thinking about them. 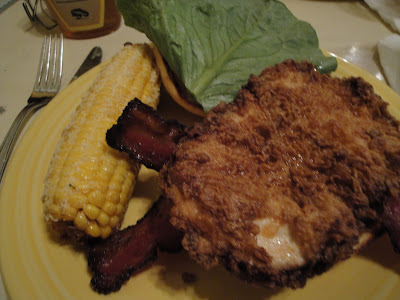 For my entree, I ordered the fried chicken BLT, with maple bacon, and a side of fried parmesan corn on the cob. It was all delicious, and I see a very bad fried chicken breast habit in my future. Sean had the meatloaf, which was fab. 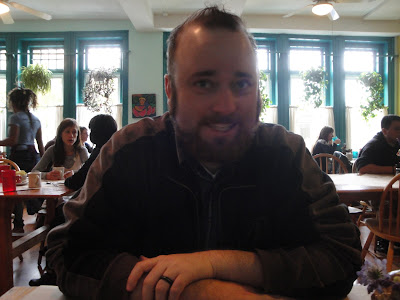 The next morning, we went to have brunch at Early Girl Eatery, another bastion of good Southern eatin'. It even earned a shout-out in Entertainment Weekly earlier this summer when the reporter met Josh Hendrickson (who will play Peeta in "The Hunger Games") there for an interview. Look how excited Sean is! 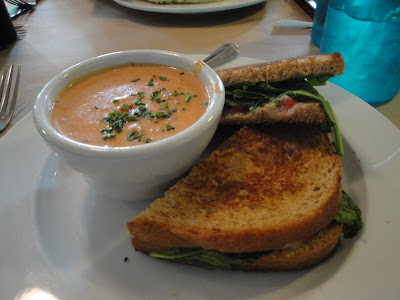 I had an absolutely delicious grilled pimento cheese sandwich with spinach and tomatoes, with a cup of tomato parmesan bisque. Let me tell you, I was tasting tomatoes for hours! Sean had a giant stack of pancakes. 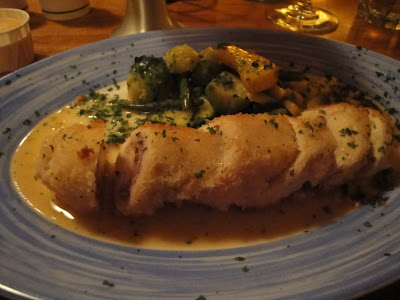 We were pretty done with Southern food by dinner time, so we followed a recommendation to visit Bouchon, a classic French eatery with a menu of comfort foods like steak frites and beef bourguignon. I ordered chicken cordon bleu, a dish I always hated when I had it in the school cafeteria, and this was wonderful. Lemony and garlicky and buttery! 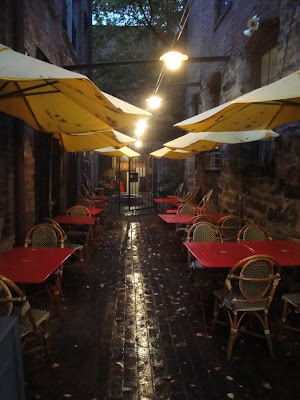 The restaurant itself was adorable, with tables in two separate buildings and in the alley between. I snapped this shot on our way back to the hotel...it was a parting shot to a great vacation!

Now, if only I ate that good every week! But I left with some new food inspiration, for sure.

Email ThisBlogThis!Share to TwitterShare to FacebookShare to Pinterest
Labels: Appalachia, eating out, travel

What a terrific post on these delicious and beautiful foods!