First of all, let me apologize! Monday somehow ended up really busy for me, with almost no time at home in front of the computer, so I'm behind on my usual picking apart of celebrity outfits...something that should always be a priority (lol).

Second of all, it was hard to get excited or upset about anything anyone wore. With the exception of Melissa Leo's crazy town outfit, nothing made me gasp, in a good OR a bad way. That's what we're dealing with in the age of stylists these days, folks. Some people need a new one, who will push them out of their comfort zone, and some people need to ditch theirs, because they've locked them in a safe box. I'm not saying fashion should be the most important thing on an actress's mind. But if I had basically limitless options and a rocking body, I'd at least have a little more fun with it than so many of these gals do. In fact, there were so many non-offensive, but non-exciting dresses, I could have done  a post of just those. So if you don't see your favorite here, it probably means I thought it was fine and just that. 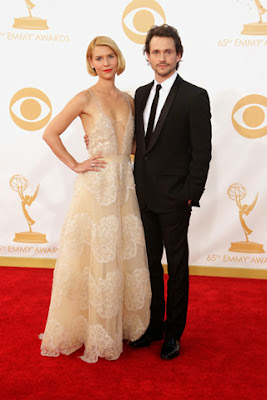 Claire does it again in Armani Prive. The gown could have been another boring nude dress, but the very sexy plunging neckline and the pattern of the lace gives it interest. The real winner here, however, is her faux bob. It reminded me of her in the late 90s, when she was wowing folks in a Narcisco Rodriguez cashmere sweater with skirt. 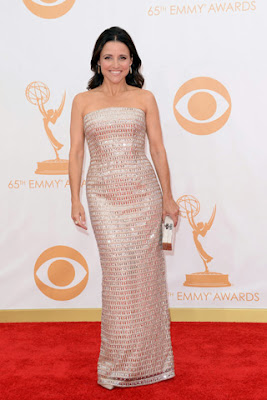 You have to give Julia Louis-Dreyfus credit for basically looking almost exactly the same as she has for 30 years, minus some hair changes. I loved how classic, yet modern this shiny Monique Lhuillier gown was and the fit is impeccable. Up close on the red carpet interviews, you could see the beading looks like mirrors. 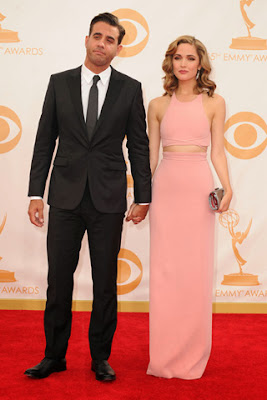 Rose Byrne winningly pulled off the sliver-of-midriff trend, looking classy and modern and sporty in her Calvin Klein ensemble. I thought the color, which seems really difficult to pull off, was perfect on her and her makeup/hair accented it perfectly. I could see how it looks a little like a big Band-Aid, but for some reason, it works for me. Also, was everyone aware she is dating Bobby Cannavale? My mind was blown. 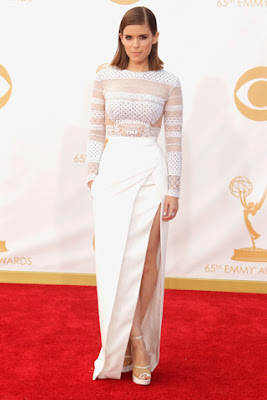 I love that Kate Mara showed up looking so. fierce. Usually the media is gushing about how fierce and futuristic her sister, Rooney, always looks, and it was cool to see her work this J. Mendel gown. I like how the fabric looks really sporty — kind of The Fifth Element if the bandages wicked sweat — but also looks extremely covered up in a 40s way. She's also giving great face here. 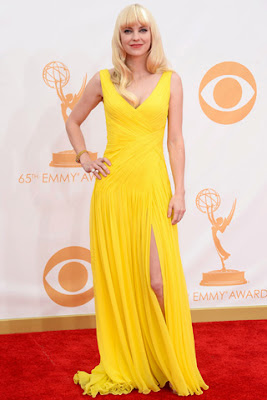 I'm pretty sure very few people would recommend a platinum blonde like Anna Faris should wear a Big Bird-yellow Monique Lhuillier gown, but I thought this really, really worked. It was daring, but extremely classy, and her simple hair and jewelry makes it work. 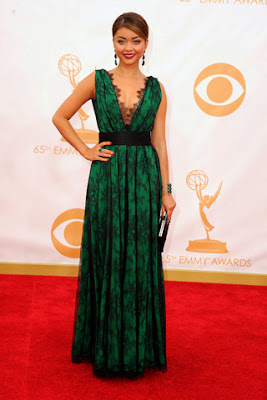 She barely appeared on screen, but I was impressed when I saw this shot of Sarah Hyland in an emerald green CH Carolina Herrera gown with beautiful lace framing. It's the accents here — the dark lip, the emerald jewelry — that makes this really shine. She also looks a LOT like Mila Kunis here. 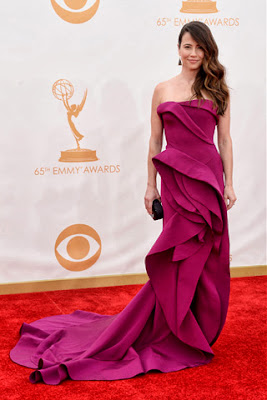 I saw this pic and was like, oooooh pretty, but...who is that? I seriously mistook Linda Cardellini for Kate Beckinsale and that is a pretty huge accomplishment for someone best known for wearing an army jacket on Freaks and Geeks. Linda's sculptural Donna Karan gown fits her perfectly, is very glamorous and was a gorgeous shade on her. The only thing I don't love is the sideswept hair...it seems a little forced, if that makes sense. 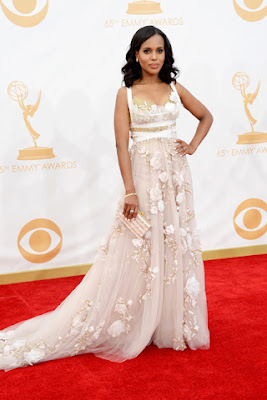 I liked Kerry Washington's ethereal Marchesa gown when I saw it on TV, but I wasn't in love. The bust seemed a little busy and frankly, a little Renaissance Faire, but the skirt detail really wins it for me in this shot. She always looks so stunning, though, I'm pretty sure she can wear almost anything and look great. 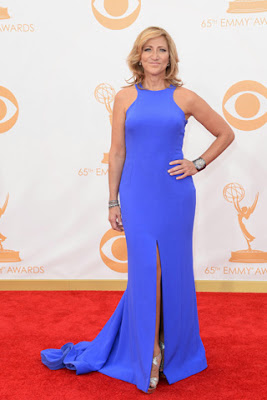 I love Edie Falco because she's not someone I ever expect to look fierce and yet she always, always does. She takes big risks and isn't afraid of interesting cuts or hot colors, like this electric periwinkle Escada gown. The cut is super modern, and the color really brings out her eyes. 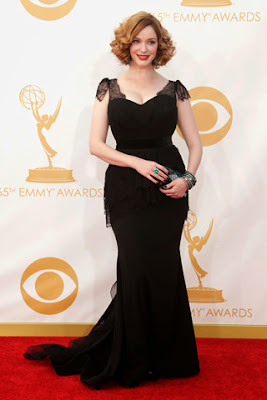 We must take a moment to give praise for something I've waited for...a perfectly fitting, perfectly flattering gown for Christina Hendricks! Can you hear the angels singing? I love this Christian Siriano gown because a) way more of us look like her than Claire Danes and b) she is so gorgeous, it's been depressing watching her parade so many ill-fitting or terribly colored gowns. My only quibble is that I find it a bummer that it's black....I feel like most designers, when faced with any body bigger than a size 2, figure black is best and a beautiful dark green would have really popped against her red hair. 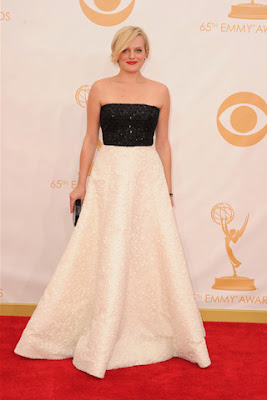 Those Mad Men girls knew what was up! Elisabeth Moss also suffers from an addiction to ill-fitted, bandage-colored gowns that age her a ton, so it was nice to see her look youthful and pretty in this Andrew Gn gown. That said, it still feels a little old for her and I'm also pretty sure I've seen this exact dress 1,000 times. 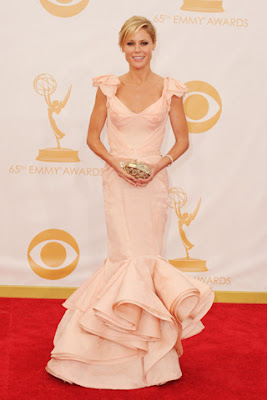 On one hand, I think this totally works. I love the details and the Old Hollywood aspect of the shape. It fits perfectly, too. But it felt a little bit like a dress from Dallas or Dynasty, and I think a big part of that was the peach color. Put this in a gunmetal or even a bronze and it might have been my favorite of the night. But in this shade, I'm getting 80s bridesmaid vibes. 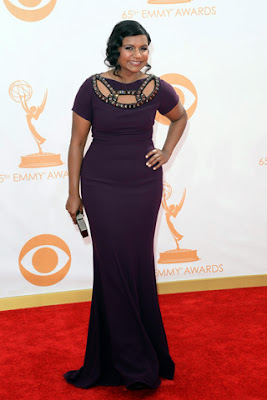 I love Mindy Kaling SO much, and I think this eggplant Georges Chakras is interesting, flattering and definitely not boring. But something isn't connecting for me here, and I think it's the hair. It seems really flat to her head and kind of makes her face look really wide to me, and I just don't love it. 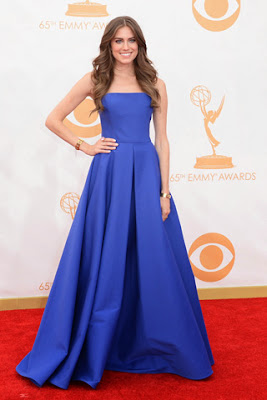 Times are bad when my husband proclaims a dress "boring as hell." Allison Williams is a stunning beauty with great fashion sense, who always looks classy like she's been doing this for years. I love the color, but this Ralph Lauren frankly looked a little cheap. The fabric, on camera, did not look expensive...it almost looked like the dress was made out of the really cheap cotton you buy at Wal-Mart to make costumes. 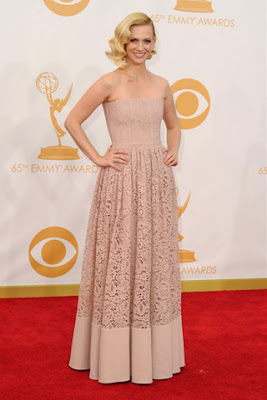 What's that? Sorry, January Jones' custom Givenchy put me to sleep. This LEGIT looks like an old vintage wedding dress that wasn't dry-cleaned in time and suffers from major accessory deficit disorder. 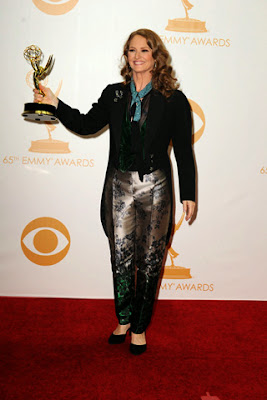 You have to just love Melissa Leo. I could have pinched her cheeks when she strode on stage dressed as the Artful Dodger on his way to a wedding, just because it finally gave me reason to shout WTF. I mean, this is a dressy Hoovertown outfit, right? Beyond that, the pants just aren't doing her any favors. They look like off-the-rack Talbots for Much Older Women pants and that just doesn't make any sense when I know this lady is fit. 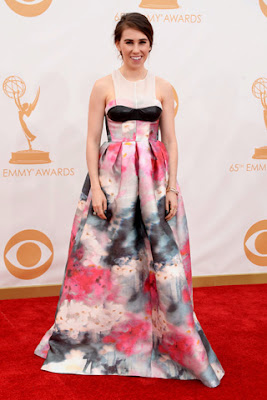 I LOVE Honor and I love Zosia for reliably always taking risks, but I just didn't think this gown worked. The bust line is, to say the least, troubling. If the black fabric took up the whole bust, I think it could have worked much better, but I'm not totally sold on the colors in this watercolory print either. It comes off less artsy and more blood-and-bruises. 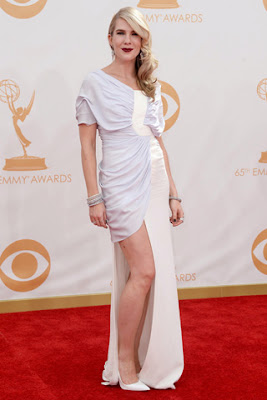 I think Lily Rabe is someone who could really benefit from a good stylist who can harness her will to be daring into better results. Her Vionnet dress just isn't great...I don't like the Two Face nature of it, especially with the white heel and not great posture. The vampy lip, with feminine lilac, also isn't working. I love her on American Horror Story, and would love to see her look really, really gorgeous and get tons of attention. 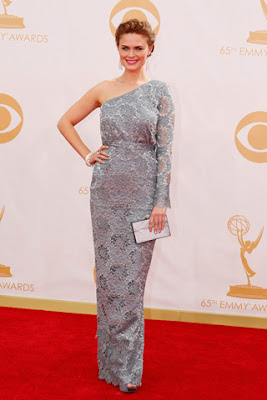 I thought Emily Deschanel's Houghton gown was particularly old for her and not very flattering. It looks very Mother of the Bride, and the pattern doesn't read as sophisticated, but rather more like Old Rich Lady drapes. 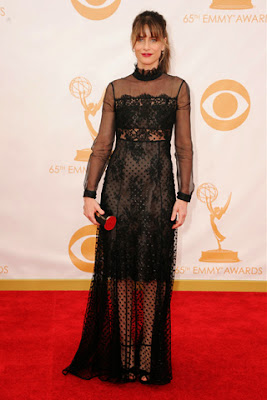 I didn't see Amanda Peet appear on camera, so I'm not sure how much it matters what she wore, but this Erdem gown looks like a Victorian mourning gown interpreted by a 90s Delia's catalog. Her hair looks super rumpled, like she just got back from a jog and she even looks sad about this, like she ordered it online hastily and when it came, she was like, "oh shit, this might look terrible, but my husband writes 'Game of Thrones' so I guess I have to go." 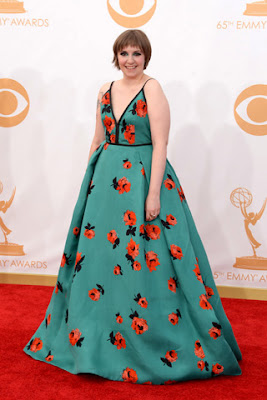 Believe it or not, I actually really struggled with whether I liked or disliked Lena Dunham's Prada dress. It's so her, and it's happy, and it's very Prada. The print is really lovely, and if it were a cocktail dress, worn to a talk show appearance, I think we all would have really loved it. My greater quibble is not the print, actually, but the shape. Everything fits well, but I just don't think it's particularly flattering. I also think she has a tendency to shy away from looking like a grown up, which is fine, but I'd like to see her try it. The hair is also just not working for me at this in-between stage. I am, however, happy she's happy.
Posted by Amber at 9:00 AM

you are my fav. red carpet reporter.