Our Wedding: The Photographs 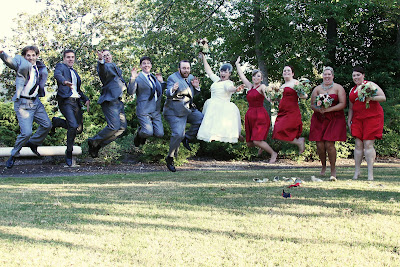 After the ceremony, our guests toured the Mariners Museum for an hour while we headed outside the museum to take pictures. My photographer, Ryan Burke, and I had plotted out what pictures we hoped to get two nights before the wedding. I can't recommend this enough; we wrote down all the combinations of family/bridal party we hoped to get, along with what detail shots were crucial. For the editing style, we talked about capturing a dreamy quality without making it over-Photoshopped. Ryan aimed to get an "Amelie" look to the pictures, which was my goal as well. 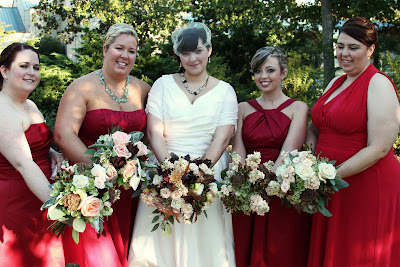 I asked my bridesmaids to choose their own red dresses from wherever they wanted, for however much they wanted to pay. The only real requirements I had were that their dresses be wedding-appropriate, knee-length and that I have approval before they commit to something. That was to ensure we were all on the same page, and also that one person didn't get a radically different dress.
Many people were concerned that this wouldn't be possible with the color red, which has so many variances, but I think it turned out great! My girls bought their dresses at Nordstrom, David's Bridal and Ross. I asked them to wear gold shoes, as well, which I think are a closet staple.
I wanted my bridesmaids to be comfortable and pretty, but most importantly, I wanted them to look like themselves. I hoped they would be able to express their style while looking somewhat unified, and I wanted them to look gorgeous and chic. I didn't want my friends to look like a sad, unhappy Army in unflattering dresses in unflattering colors that they have no hope of wearing again. 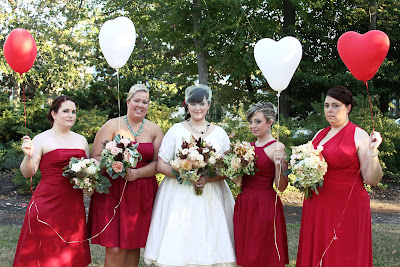 I ordered heart-shaped balloons off of Amazon, and they arrived on Friday night! I had given up on any hope that they would come in time, but they did, and Miranda had them filled. They were used to guide guests to the venue, then we grabbed a few for pictures. 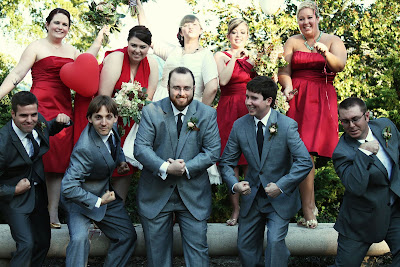 The boys bought their suits at Men's Wearhouse. They were just asked to buy light gray suits, and I thought they looked very handsome. Sean bought their ties, which had a very subtle diagonal check pattern, from the J.Crew outlet store. 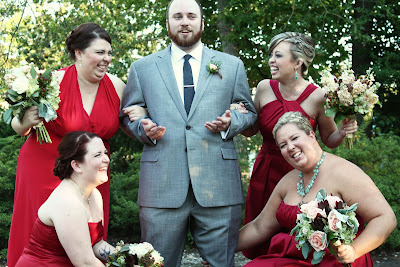 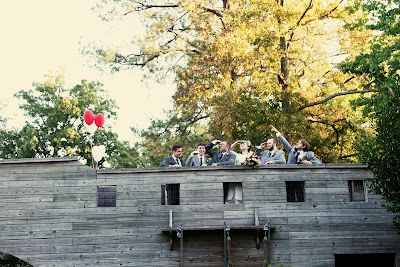 The museum has this fake wooden ship outside, and the boys convinced me to climb up there for pictures. It was totally frightening, trying to climb a ladder up onto the deck, and when I was climbing down, I ended up throwing my shoes down the shaft and having to ask Sean to push the layers of my dress down so it didn't go over my head! It was quite an adventure. 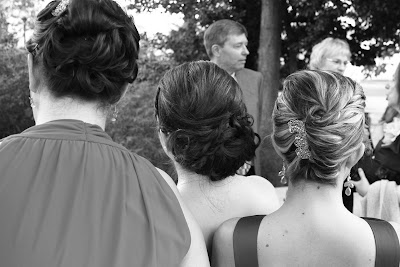 My bridesmaids' beautiful hairsdos! Sarah made each of us sparkly fabric hairpins, like the one you see in Jamie's hair. 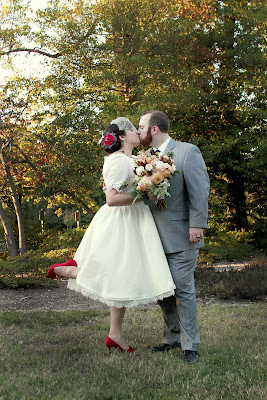 I had worried that the hour in between the ceremony and reception wouldn't be enough time for my minions to transition the space to party-ready, but it turned out to be plenty of time to take pictures and transform the space.
Next up: The Reception!
Posted by Amber at 12:00 PM

Email ThisBlogThis!Share to TwitterShare to FacebookShare to Pinterest
Labels: our wedding