Our Wedding: The Ceremony 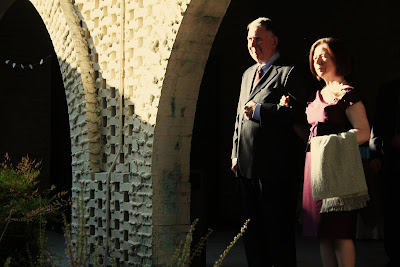 During the entire experience of planning the ceremony, I kept equating it to my small amount of experience in the theater. Scene changes, costumes, places, lines...it all seemed pretty familiar to me, and when people asked me if I was nervous, I figured the worst that could happen was someone would mess up, and audiences love that.
I attribute that experience with my sense of calm on the actual day. When my friend Chanelle got married to her longtime sweetheart, whom she met in high school, she seemed preternaturally calm. I remember I asked her how she could be so calm, and she said she was just excited. Not emotional or overwhelmed, just excited. I wanted to be like that.
In reality, I got a little weepy pretty quickly after I arrived at the venue. I peeked through the windows onto the garden and saw that my vision — my carefully planned, explained, crafted vision — was reality and I couldn't look away. My bridesmaids and I kept running into guests who were unabashedly coming up to talk to me, despite my dress and all that, so we finally had to face our chairs away from the door.
My mother came in and I noticed her chin was wobbling, a tell-tale sign of tears. She said, "I just came in to say goodbye to my baby." I was like, "Oh, don't be silly" but then I said, "I really miss Nana today" and that really got us going. 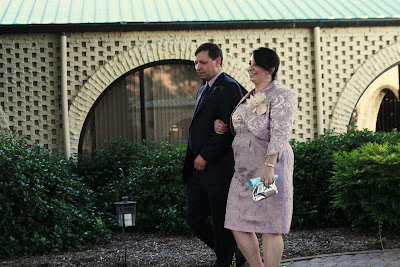 Before I knew it, it was time to line up. I think Miranda literally said, "It's show time," and I was so excited. It didn't really hit me that this was really happening until the music started.
Our parents walked in to "Dream a Little Dream of Me" by The Mamas and the Papas, and the groomsmen walked in to "Our House" by Crosby, Stills, Nash & Young. That song makes me cry any day of the week, and this was no exception. 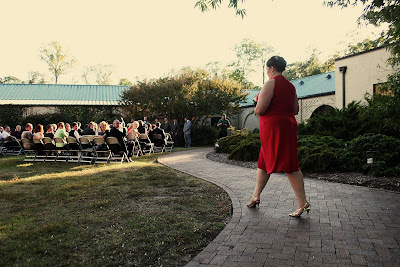 My bridesmaids walked down the "aisle" to "Here, There and Everywhere" by The Beatles. 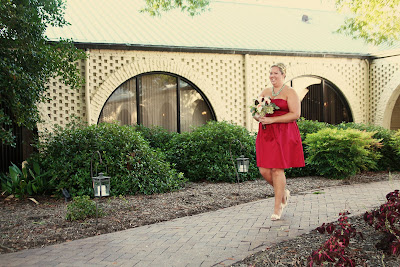 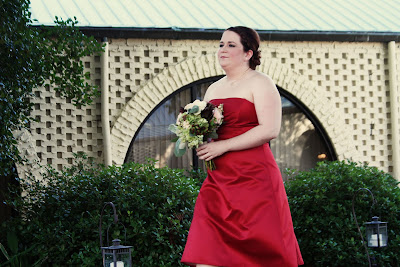 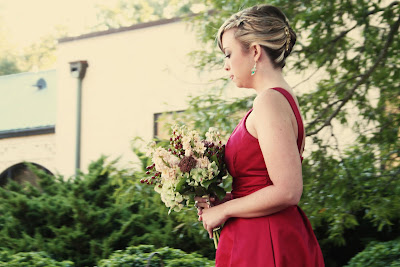 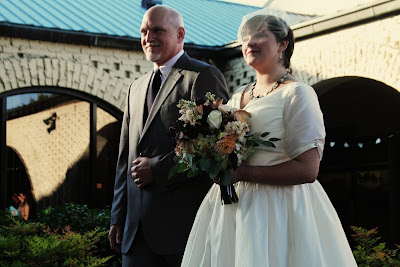 And then it was my turn. I managed to stay composed until I heard that first magical strain of Cat Power's cover of "Sea of Love." I downloaded that song sometime in the winter of 2003 and knew at that moment it would be in my wedding. Despite my best efforts, I immediately felt my composure waver, and before I knew it, I was biting my lip to stop the tears. I decided to just smile through it.
My dad, by the way, thought the song choice was awesome. That's because he is awesome. 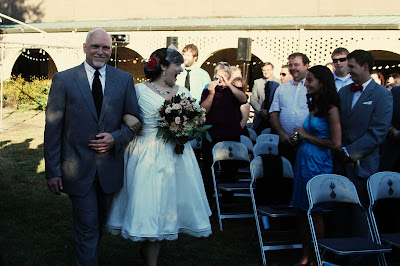 I think brides have a tendency to think they'll magically be a different person on their wedding day. A graceful, ballerina-like swan, perhaps. I was totally and completely, maybe embarrassingly, me. The sun blinded me as we walked down the aisle, so I scrapped my original plan of gazing into Sean's eyes and decided instead to look at my guests. I was so excited to see some of them, I mouthed, "I LOVE YOU!" in a big theatrical way. 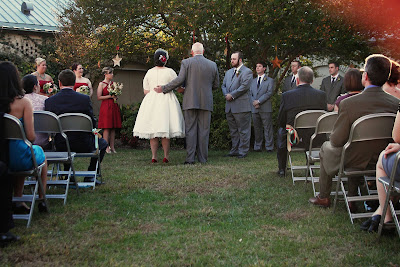 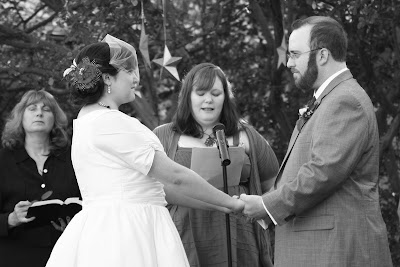 I cried through most of the ceremony, I have to admit. Sean looked at me with such tenderness, I think I was almost in shock. I squeezed his hand as hard as I could. 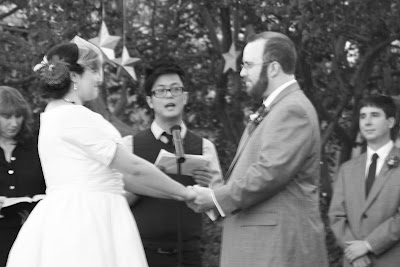 But I was still aware of the outside world. At one point, birds flew into the tree and our guests audibly sighed with pleasure. Everyone told me later that it seemed almost too romantic. I heard the birds and the water from the fountain, and I remember thinking, "This must be beautiful." 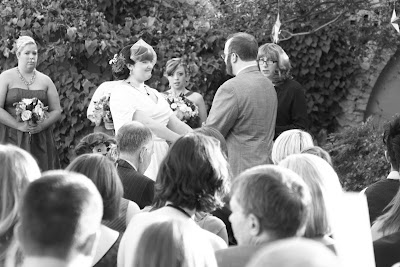 I remember feeling such a big lump in my throat that I was surprised to hear my own voice echoing through the garden when I said my vows. I focused very hard on repeating them the right way, and was pleased my voice didn't waver. Sean, for once, didn't mumble. 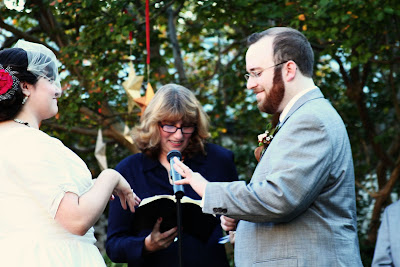 When it came time for rings, I could barely get Sean's on his finger, so I just threw up my hands and said, "Close enough." 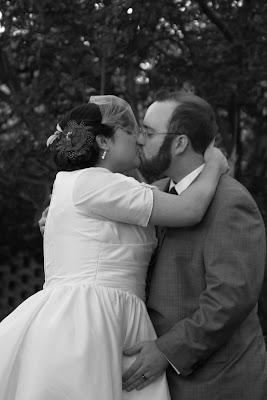 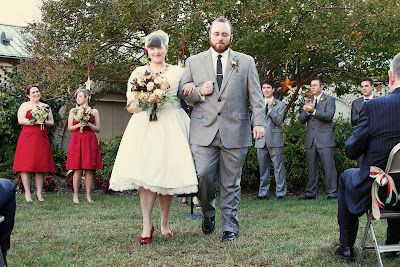 And suddenly, we were husband and wife. It was an amazing feeling to face this group of people who we love and who love us, and wanted to be there to witness. 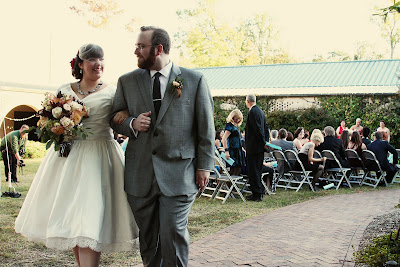 And despite our fancy outfits and special words, we were still ourselves, as we walked away. I said, "Are you excited to be married?" and Sean characteristically said, "Yeah."
I had a very hard time narrowing my ideas for the wedding, and I couldn't have written the ceremony without the help of my cousin Deena, who served as our officiant. Deena and her husband are both chaplains, and she has always been my father's favorite cousin. She married my father and stepmother a few years ago, and at that time, I thought she was the best officiant I'd ever seen: warm and friendly, but capable of conveying the depth of the day.
As a former English major, I could have picked hundreds of readings, but I was able to choose just three: a selection from "Anne of Avonlea" by L.M. Montgomery, a selection from "Still Life With Woodpecker" by Tom Robbins and "Union" by Robert Fulgham.
My dear friend Sara, a children's librarian who went through the English program with me, read the "Anne of Avonlea" selection. We both have a shared love of Anne with an E. Here it is:

"It was as if a veil that had hung before her inner consciousness had been lifted, giving to her view a revelation of unsuspected feelings and realities.

Perhaps, after all, romance did not come into one's life with pomp and blare, like a gay knight riding down; perhaps it crept to one's side like an old friend through quiet ways; perhaps it revealed itself in seeming prose, until some sudden shaft of illumination flung athwart its pages, betrayed the rhythm and the music; perhaps...perhaps...love unfolded naturally out of a beautiful friendship, as a golden-hearted rose slipping from its green sheath."

Our friend Mark, a poet himself, read a selection from "Still Life With Woodpecker." Mark has excellent taste and is much more well-read than I, so I was hesitant to share my selection with him. Imagine how delighted I was when he said it perfectly expressed how he feels, too! Here it is:

"Love is the ultimate outlaw. It just won't adhere to any rules. The most any of us can do is to sign on as its accomplice. Instead of vowing to honor and obey, maybe we should swear to aid and abet. That would mean that security is out of the question. The words 'make' and 'stay' become inappropriate. My love for you has no strings attached. I love you for free."

And this one, "Union" by Robert Fulgham, is the one that made me cry. Deena read this one for us, and I've received many compliments on choosing it. It's very relatable for any couple:

“You have known each other from the first glance of acquaintance to this point of commitment. At some point, you decided to marry. From that moment of yes, to this moment of yes, indeed, you have been making commitments in an informal way. All of those conversations that were held in a car, or over a meal, or during long walks — all those conversations that began with, “When we’re married,” and continued with “I will” and “you will” and “we will” — all those late night talks that included “someday” and “somehow” and “maybe” — and all those promises that are unspoken matters of the heart. All these common things, and more, are the real process of a wedding.

The symbolic vows that you are about to make are a way of saying to one another, “You know all those things that we’ve promised, and hoped, and dreamed — well, I meant it all, every word.”

Look at one another and remember this moment in time. Before this moment you have been many things to one another — acquaintance, friend, companion, dancing partner, even teacher, for you have learned much from one another these past few years. Shortly you shall say a few words that will take you across a threshold of life, and things between you will never be the same.

For after today, you shall say to the world — This is my husband. This is my wife.”

Email ThisBlogThis!Share to TwitterShare to FacebookShare to Pinterest
Labels: our wedding

sniffle. I am so glad that your wedding day was all that you had dreamed of. You did an incredible job planning and decorating! I absolutely love all of your selections, especially the one from Anne of Avonlea. I can't wait to read the books and watch the movies with my daughter (hoping I have at least one)! One day I will make it to Prince Edward Island.

ok, i cried reading through your readings again... not to be morbid or creepy but i thought your nana was there for the actual wedding... i swear that although my mouth was moving, it was her voice that gave you away... you know that she would have loved (and probably somehow did love) the wonder that was your wedding and that "Anne of Avonlea" was a perfect choice in her memory

Mom, that is totally creepy and morbid. But I love you anyways, and it's a nice sentiment. She would have heard the "Anne of Avonlea" reading and said, "I TOLD you you would LOVE it!"