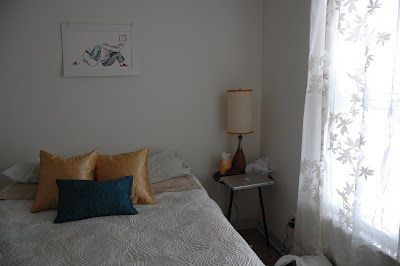 Do you ladies ever feel like you need to compromise on style a bit to satisfy the man that now shares your bedroom? I will always be drawn to soothing spa colors for the bedroom, but I'm trying to keep the Danish modern teak thing going on to lend it that masculin-feminin mix.
I think I will always be undeniably girly, but lately, I was feeling a little sorry for Sean. We've slept with my uber-girly quilted satin coverlet for a couple years now, and as much as I love it, there's no denying it looks like something Marilyn Monroe would have had in her bedroom.
It's also incredibly slippery, which means when Sean inevitably kicks off the sheets, it slides right off the bed, leaving me shivering. 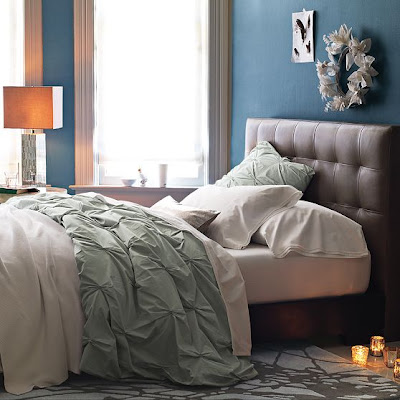 Sean also hates blankets, so I was trying to come up with a way to keep me warm as we move into the new seasons without having to layer 50 blankets on the bed. Using one of our wedding gift cards, I invested in a down comforter and ordered this pintuck duvet cover in natural from West Elm. 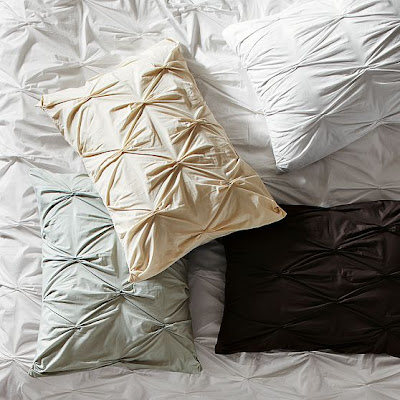 What I liked about it is that it kind of hints at the style of my old coverlet, but is in a more dude-friendly cotton. I also thought the pintucks somewhat resemble origami, and what's more manly that Japanese paper art? LOL.
But in all seriousness, did you feel the need to adjust your style for that extra Y chromosome now taking up space in your home?
Posted by Amber at 11:57 AM

Email ThisBlogThis!Share to TwitterShare to FacebookShare to Pinterest
Labels: decor, marriage, our home

I have won every battle except for when I want to decorate for the holidays. Andrew doesn't like stuffed characters sitting around the house and that was a pretty hard pill to swallow.

I don't buy anything super girly, but I also do most of our home decor shopping alone. I want to see an updated pic of the bedroom once your new duvet comes in!