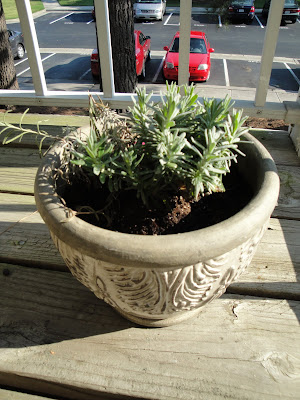 So I promised I would post pictures of my little garden as it grows. I've had some successes, but I seem to be on the path toward crushing defeat in regards to my lavender plant. It kinda just stopped growing, and as you can see, some of it dried up. I ended up just pulling that part out in frustration. Any advice? 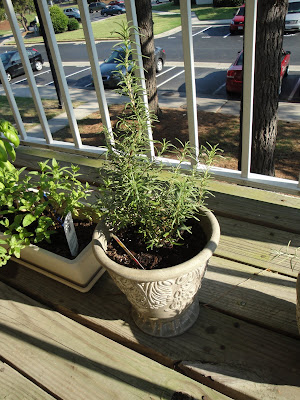 My rosemary is doing just fine. I need to actually get around to using it! 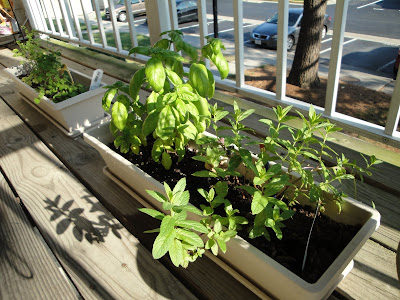 The basil and mint are rocking out for sure. 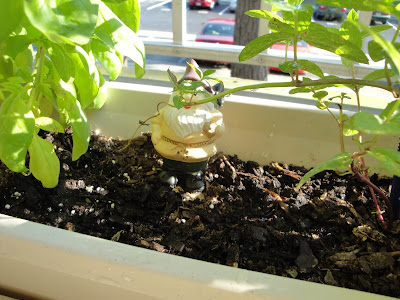 My little gnome man is hidden in the foliage now. 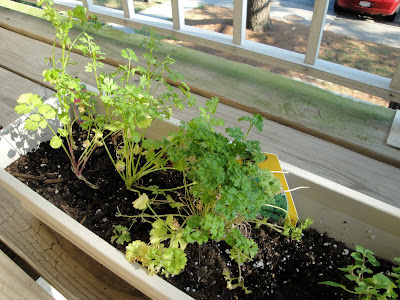 But my cilantro...sigh. It's turning yellow SO fast. I read that can happen when it's overwatered, but I can attest that when I did a finger test, the soil was NOT moist. I've been pruning the dead leaves, but at this point, that's almost all of them. What the what, Internets?
Posted by Amber at 11:00 AM

Email ThisBlogThis!Share to TwitterShare to FacebookShare to Pinterest
Labels: garden

Cilantro is a cool weather plant and quickly dies off in the summer. I learned that a couple of summers ago! I've got a great organic gardening book that I can recommend if you are interested.

My basil is getting big, but the mint and rosemary are struggling! UGH. I used your idea to hold up the mint and used to bendy straws to sturdy it upwards. Wish me luck!

Emily, that explains it. Should I bring it inside then?

You can try that if you have a super sunny spot. It still needs lots of sun but just doesn't do well in the hot southern summers. If it dies out, try it again in the fall (but before chance of frost) or early spring.