Y'all the SAG Awards red carpet is just weird. It's always been one of my favorites because people get a little experimental...which means there can be more "meh," "bad" or "worst" outfits than anything I would deem "best." Also, two trends emerged: white (I think everyone is trying to convey peace at the moment) and what I would call "gothic florals," pairing flowers with sheer black. Let's get into it! 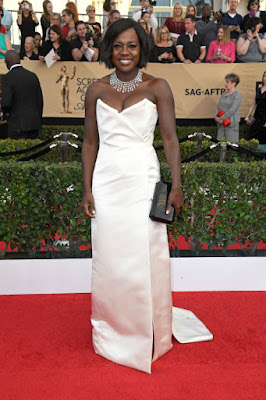 My queen Viola Davis looked especially regal in this white satin Vivienne Westwood gown, accented with a beautiful crystal necklace (unless it was diamonds? I genuinely couldn't tell). But especially big shout-out to her hairstylist, who gave her a cute, modern, neatly trimmed bob. She hit all the right notes. 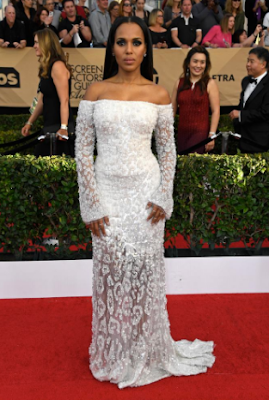 My fashion roller coaster with Kerry Washington continues. One month she looks like this — a frothy and sparkly Maid Marian Renaissance queen in Cavalli Couture — and the next month, she'll turn up essentially wearing a satin trash bag and trying to tell me it was a good idea. This was very pretty and elegant, and I appreciated that she accessorized with a safety pin on the sleeve. 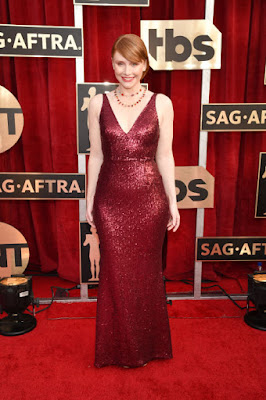 I kind of really wanted Bryce Dallas Howard to win because her episode of "Black Mirror" was haunting and incredible. But at least she won a really coveted and lofty award: a redhead finding the perfect shade of red! I thought this ruby Dress the Population dress was a really lovely shade on her and loved it even more when I read that she again bought off-the-rack at Neiman Marcus. Most of all, I thought her multi-colored gemstone necklace was an unexpected and sophisticated touch. 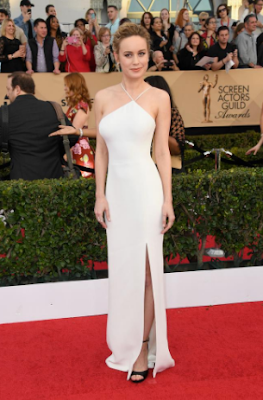 This dress manages to make Brie Larson look like she has the proportions of a Barbie doll. I can't decide if I'm fully on board for the slightly off-center neckline, but I do know that when she appeared on screen, she looked like an elegant peace dove. I appreciated the minimalism. 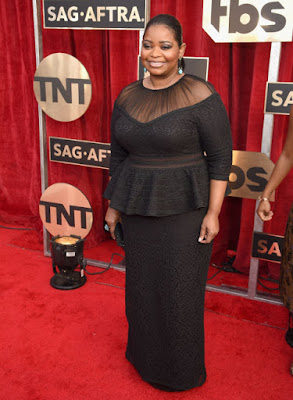 I think this is one of the best Tadashi Shoji dresses Octavia Spencer has ever worn! It's flattering, it's sexy, it has a lot of visual interest and she looked really comfortable and elegant all night. I especially enjoyed the turquoise pop of color on her earrings. 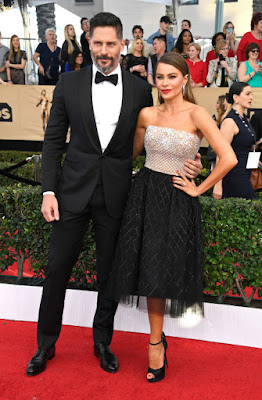 I was getting so bored with the Sofia Vergara va-va-va-voom mermaid dress formula, so it was a happy surprise to see her pop up in a tulle ballerina skirt confection. Her Zuhair Murad was a perfect fit for the occasion and she played up the fluffy skirt up and down the red carpet. 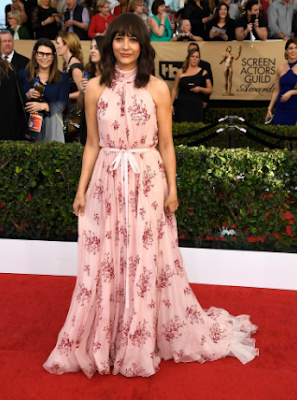 In a night full of florals, Rashida Jones' Vivienne Westwood gown was my favorite. I love the delicate layers and froth at the bottom, but most of all, I love how its vaguely 70's vibe so perfectly suits her aesthetic. Perfect match! 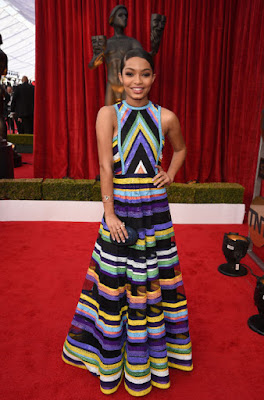 There were a surprising amount of experiments in stripes at the event, but none as successful as the Naeem Khan gown worn by Yara Shahidi (of Blackish). I love when a very young starlet perfectly hits the right tone for her not-a-girl, not-yet-a-woman moment. It's fun and youthful and so flattering with her gorgeous skin.

So Close to Great 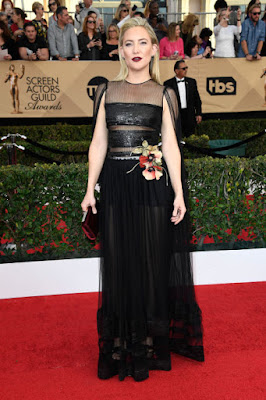 I just can't with this flower. I'm trying really hard. Kate Hudson's Dior gown is definitely interesting and she struck the right vampy tone with her make-up. But the flower seemed like needless distraction. But without it, would it be too boring to even remember? Would I like it better if the flower was in her hair? I just don't know. 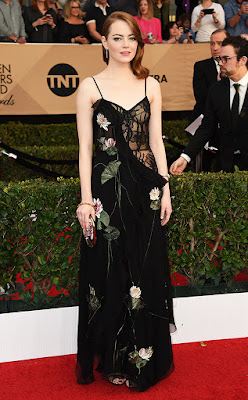 Emma Stone also donned a vampy floral Alexander McQueen gown that gives the impression she was caught midway through disrobing and decided to just wear it that way — half underpinnings, half robe. I don't hate it, but it wasn't an immediate hit for me, either. I appreciate the effort, though. 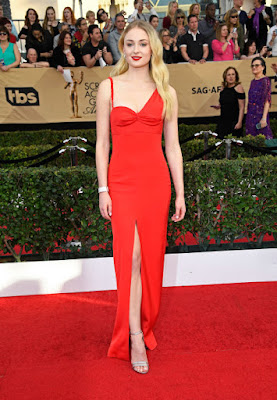 This is the best thing Sophie Turner has worn in my recent memory! She looked cute and sexy, but it's still a little snoozy for my taste and I don't think the bust fit is what it could be. 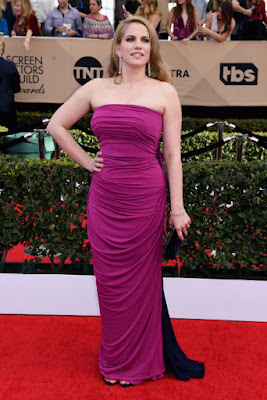 This is by far the most successful outing Anna Chlumsky has had on a red carpet since Veep debuted. I still wouldn't say this Elizabeth Kennedy gown is a perfect choice, but the color and silhouette look great on her and she doesn't look 100% miserable as she so often does. 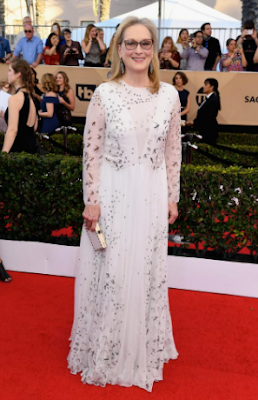 I thought Meryl Streep's Valentino was one of the prettiest things she's worn in recent memory. It's flattering and ethereal and dotted with tiny birds, which is super cute. It just wasn't the most exciting thing. 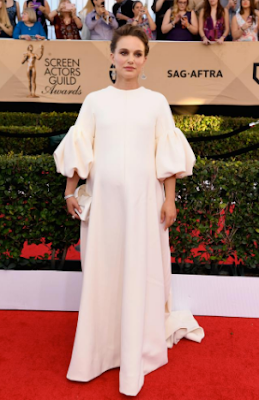 Natalie Portman looks like she felt meh, right? Her white Dior is elegant, but that's a LOT of volume, and I got the vibe she has entered the super uncomfortable phase of pregnancy and would have much preferred to be home. 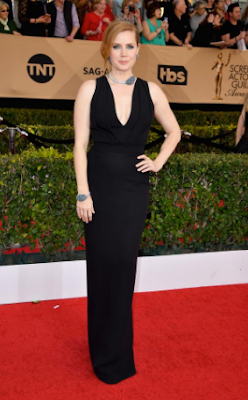 I think this is Amy Adams' "Y'all didn't nominate me for an Oscar even though Arrival was solid AF and I STILL haven't won an Oscar but the movie is getting accolades, so I have to show up" plain and sophisticated black dress by Brandon Maxwell. She accessorized with a kind of weird, but maybe interesting silver metal sci-fi egg necklace and bracelet combo and pretty much let them do all the work. 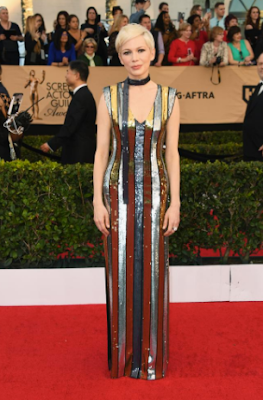 This Louis Vuitton is bad, right? On TV they said it was good. I can almost see it as good in a Studio 54 kind of way, but she doesn't really have the personality or verve to sell it. Picture it on Tracee Ellis Ross. Now it's fantastic, right? 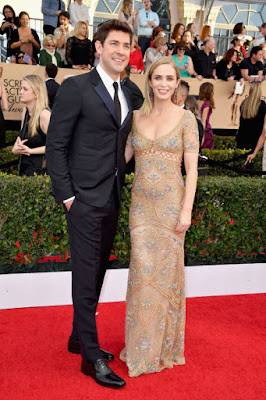 I just couldn't work up an emotion about Emily Blunt's Roberto Cavalli gown. It felt like Granny's handkerchiefs meets a giant tattoo sleeve meets a Persian rug. It's not bad, but it's not spectacular either. 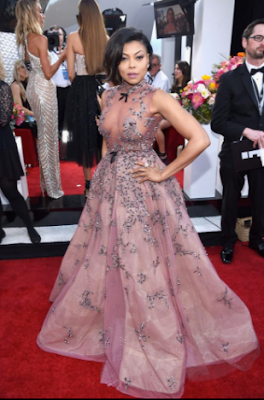 I promise I'm not a 12-year-old boy but every time I saw Taraji P. Henson, my eyes were like BOOBS! I couldn't stop staring. This is a slightly overdesigned pretty princess dress by Reem Acra that I just don't like as a concept very much. The tiny bows at the collar and waist, suspended in the nothingness above and below her boobs — spare me. What a silly little unnecessary accoutrement. However, I do like the color, and the beadwork is lovely. 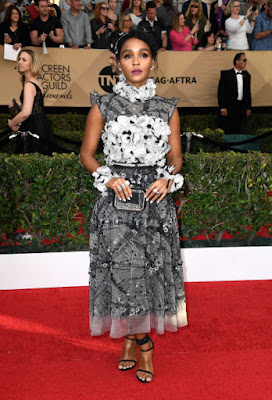 Janelle Monae is at peak Janelle Monae and as we discussed for Golden Globes, the rulebook is different for her. She's pulling off this Chanel, even if it's essentially an Elizabethan take on Cruella De Vil. 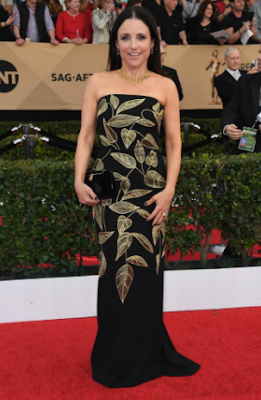 I guess this could be worse. But it's basically a Thanksgiving table runner by Lela Rose. Not the most boring thing, but not setting my imagination on fire either. 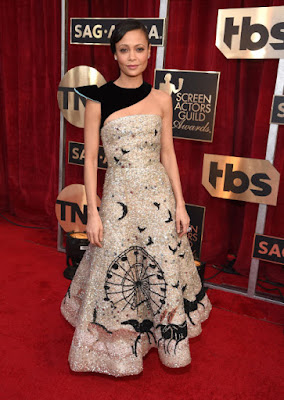 I am having an existential crisis over this dress on Thandie Newton. From the bodice up, I am officially On Board. It's pretty and different and interesting. And then you scroll down and it's like...is this a Westworld-themed dress? Do I want to endorse show-themed apparel that is this literal? When I read that it was by Schiaparelli, famous for a humorous approach to fashion, I was swayed a little bit toward appreciating it more. 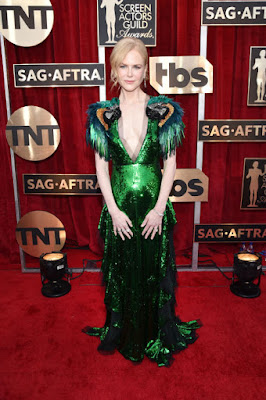 Longtime readers will recall there is a special category for The Best Worst, an award for someone whose outfit is the worst, but also maybe actually the best? I mean, Nicole Kidman deserves a Best-Worst Hall of Fame award for valor in this fit-for-Cabaret dress adorned with the heads of her enemy parrots. One can only assume she emerged from a rumble in a jungle with these trophies and demanded Gucci create a wearable tribute that would put parrots everywhere on notice. 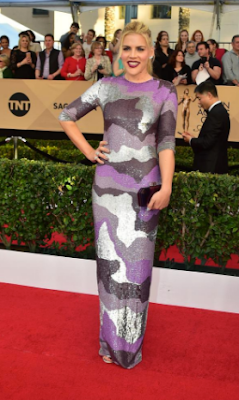 Busy Phillips also achieved a rare and confusing success wearing a sequined purple camouflage gown that looks like something they rejected from the Never Been Kissed prom scene. But it's kind of working, right? 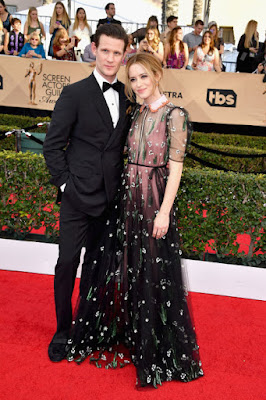 Claire Foy is trying really hard to win me over and convince me she is a daring fashion risk-taker of the highest order, but honey, you gotta crawl before you can walk and you are NOT Julianne Moore or Nicole Kidman. This Valentino dress has split personalities...demure secretary on top, then black lingerie over a sundress? Cheery, sexy pilgrim-meets-Morticia? I just couldn't make enough sense of it to understand the appeal. I bet I'd love it on the runway, hahahaha. 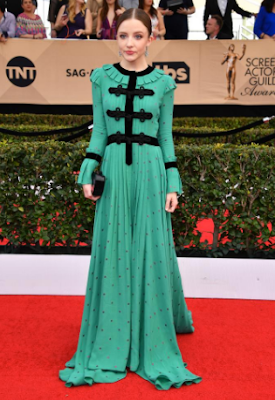 This is a person named Samantha Isler who is apparently in Captain Fantastic when she is not giving costumed historic tours of the Winchester Mystery House. Textbook example of what Tim Gunn means when he says you're straying a little too close to "costume." 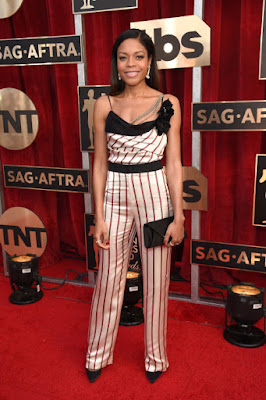 Woof. Naomie Harris donned a simultaneously tight and drooping wrinkly satin negligee-turned-prison jumpsuit by Lanvin and it was a crying shame because she is beautiful and deserves better. 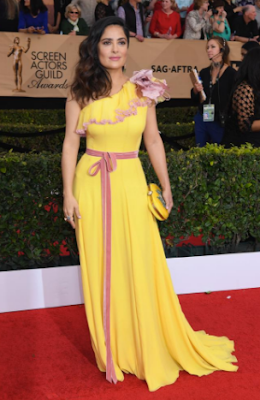 There is no scenario in the entire world in which I could be prevailed upon to select this yellow Gucci dust ruffle that is, inexplicably, further adorned with a pink ribbon and a pink flower. It's one of those ill-conceived color combo dresses you would have only seen in a 1970s wedding. As a cocktail-length dress worn to CBS upfronts to court advertisers, Mayim Bialik's dress could maybe pass for cute. The colors scream holiday popper, and maybe more appropriate to wear for a Christmas Eve cantata with the choir (if she weren't Jewish). 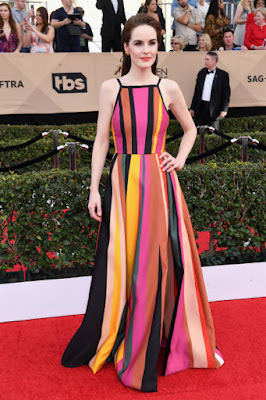 I've said it before and I'll say it again: Michelle Dockery needs a new stylist. Here's what's crazy: she has the same one as the always-flawless Lupita N'yongo. I just have a feeling Lupita has a better sense of who she is and what vibe she wants to project. This isn't actually 100% terrible — in a slightly more casual cut and fabric, it would make for a fabulous "night out" dress in the Caribbean. But this Elie Saab is just not a fit for her complexion, in my opinion, and even more than that, I have no clue what her taste really is because her style is all over the place. 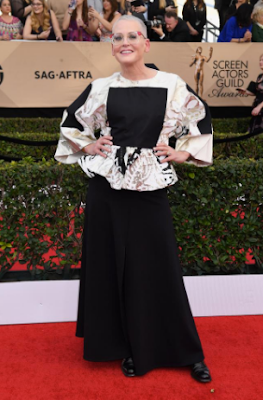 Lori Petty is such a reliable, lovable kook. Last year she made my worst-dressed dreams come true with her Barbie JNCO outfit and this year, she slid into what I assume Maria Von Trapp would have made if she had to combine her nun's habit with a tablecloth. She paired it with comfy orthopedic shoes for a night out!