Everyone knows nothing is worse than someone who offers criticism with no solutions. A few years ago with that spirit in mind, I started putting my stylist hat on, applying my imagination and envisioning what I would wear if I were invited to the Oscars. Travel down the virtual red carpet with me and let me know if I'd be on your best-dressed or worst-dressed list. 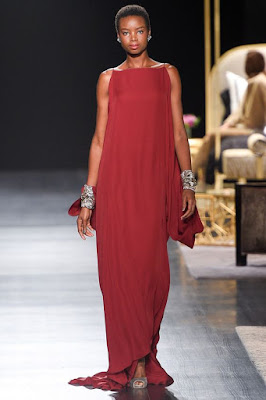 If you're on the arm of a nominee, you have the best ticket in town. No pressure, no one really cares what you wear, but you still get to have a great night out on the town. I immediately pictured Pauletta Washington, Denzel's wife, who has done this so many times. She always looks fantastic, so why not be comfortable, too? I love the Roman vibe of this Badgley Mischka that you can dress up as much as you want with accessories. In the '90s, Pauletta would always carry Judith Leiber sequined bags themed to his roles, like boxing gloves for "The Hurricane." So I like the idea of bringing that back...maybe minus the "Fences" theme. 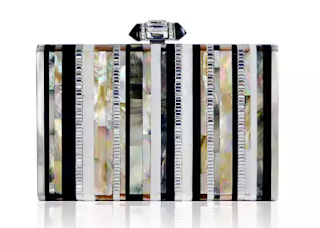 If I Were: A Nominee for a Non-Acting Award 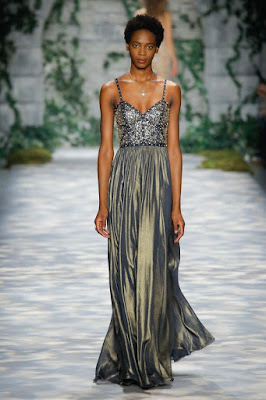 Every year, some lovely lady who is decidedly not famous has a moment in the spotlight. Maybe she's a producer, or costume designer or sound mixer or documentarian. Needless to say, she's suddenly standing on a stage broadcast to millions when she normally isn't, so she wants something special but maybe not ostentatious. I think this cool metallic Jenny Packham gown would do the trick for the right person. The color is interesting, the beading is pretty, yet understated, and I don't think America would look up and say, "Wait, what is this unfamous lady wearing?" in a negative way. 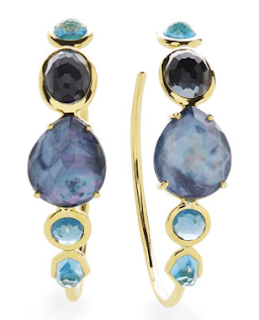 I'd pair it with this lovely set of Ippolita hoops, just as multicolored and intriguing as the gown.

If I Were: An Ingenue Presenting an Award 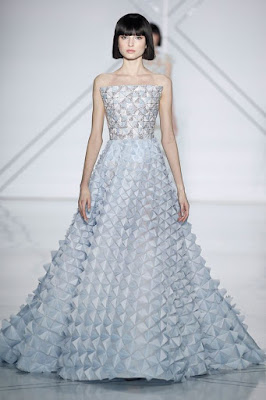 It's really Janelle Monae's year. She decided to try acting and ended up in two of the movies nominated for Best Picture. She's already cemented a reputation as an adventurous risk-taker in the fashion realm. I'd like to see her straddle that line between innovative, intriguing and classic Oscar style, so I'd love for her to pop up in something like this Ralph and Russo origami gown. 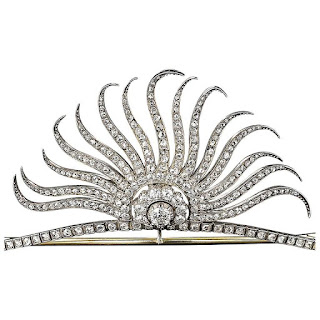 If anyone could pull off a Victorian diamond starburst tiara, it's Janelle. How gorgeous would this be atop one of her signature amazing updos?

If I Were: a Grand Dame of Acting, Nominated for Every Role 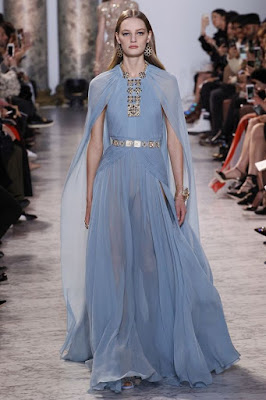 Meryl Streep could get nominated for coughing, so it's a given that if she acted within the year, she'll be going to the Oscars. She usually doesn't turn up the glamour too much unless she knows she's winning, but I think it would be cool to see her wear something as fancy as this Elie Saab cornflower gown (obviously with a few more layers in the skirt). It would look gorgeous with her blonde hair and blue eyes. 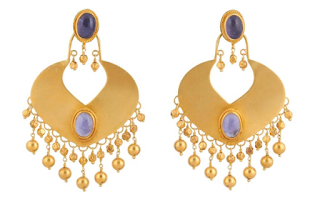 I really love the styling on the Elie Saab runway, so I'd take some of that inspiration and wear Indian-inspired earrings, like these by Rebecca Koven. 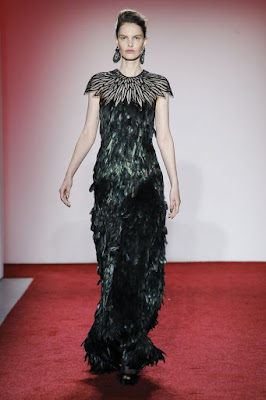 Although her performance in "Manchester by the Sea" was beautiful, Michelle Williams doesn't have a shot at the Best Supporting Actress award. She can still grab attention and have fun in the process, though! She loves simple silhouettes with a bit of edge, so why not have her pop up as a glamorous bird? I'm a sucker for feathers, and I think the high neckline of this Naeem Khan would look fantastic with her short hair. 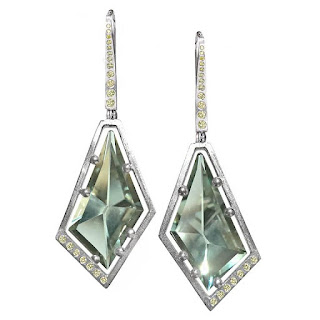 These futuristic and edgy green amethyst earrings would perfectly complement the feathers, and might even be kryptonite, to boot.

If I Were: An Actress Nominee Not Likely to Win 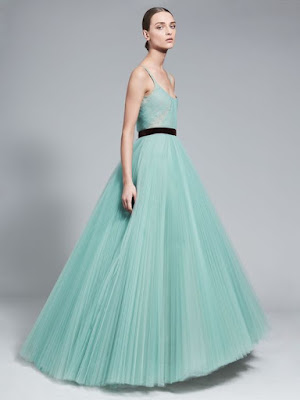 Ruth Negga definitely won't win, but this is a great chance to introduce herself to a wider audience. At the Golden Globes, she wore a cool metallic robot dress and a quick Google image search shows she gravitates toward florals, lace and fussy details. I'd like to see her instead in an extremely simple, balletic silhouette in a color that will make her skin glow. 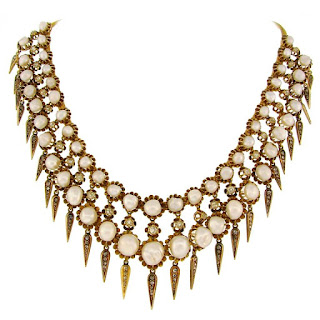 But to keep things unexpected, I'd swerve away from the standard diamond necklace in favor of something edgy and interesting, like this antique victorian pearl necklace.

If I Were: A Pregnant Nominee 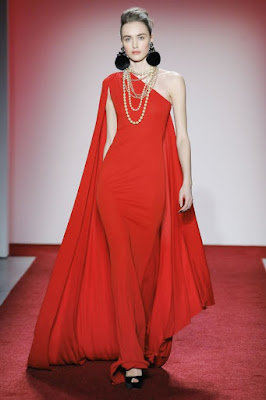 Natalie Portman is real pregnant, y'all, and she's also dressing in full Jackie O mode. I think something simple and elegant like this Naeem Khan could be adapted for her baby bump and still be relatively comfortable. I'd skip the big necklace and HUGE earrings shown on the runway, however. 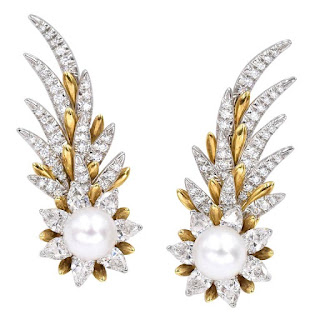 To get in full Jackie mode, it would be a nice tribute to wear jewels by the First Lady's favorite designer, Jean Schlumberger, like these ear clips... 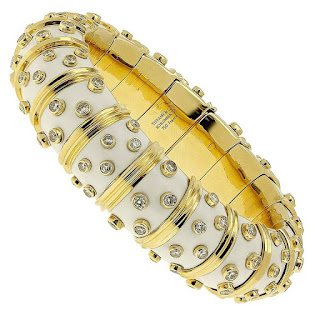 And the famous enamel and diamond bangle!

If I Were: Likely to Win Supporting Actress After Multiple Noms 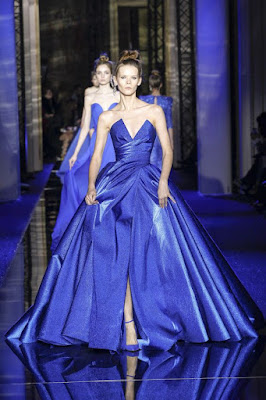 It's Viola Davis's moment to shine, after so many close-call nominations! She looks amazing in bright colors and silhouettes that show off her toned arms. I'd love to see her in something with more volume, like this Zuhair Murad gown. Dressed like she's ready for the ultimate blue ribbon! 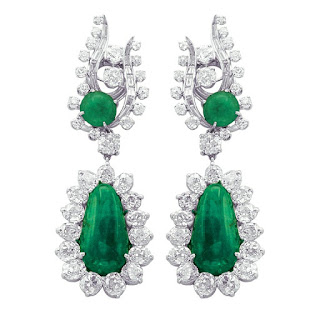 It would be fun, especially with Viola's skin tone, to use another beautiful bright color for pop on her jewelry. I'd pair that royal blue with these gleaming emeralds.

If I Were: America's Sweetheart Finally Winning 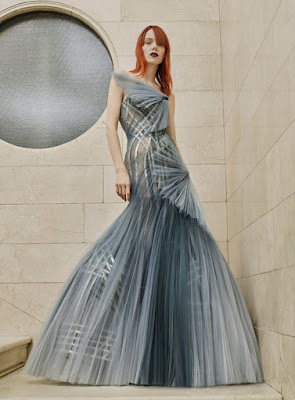 I think our girl Emma Stone has a shot at winning, y'all! She's been putting in great work for years, and her peers (Jennifer Lawrence, Brie Larson) have already taken the gold man home, so it's her turn. She's pretty open to risk-taking on the red carpet, and usually does it with aplomb. I'd like to see her tackle an edgy and fascinating gown like this pleated architectural wonder by Versace. 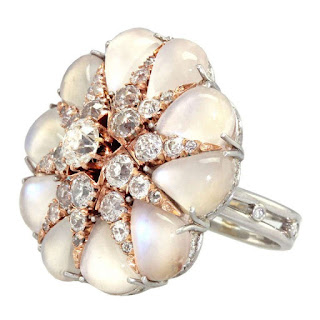 I wouldn't want to distract too much from the detail of the dress, so I'd just pick a lucky star ring (perfect for La La Land) of moonstone and diamonds. 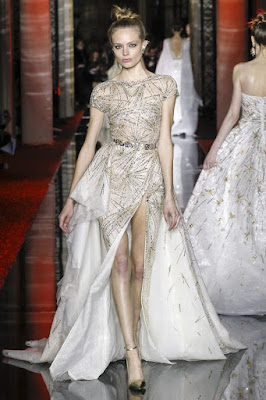 If she'd rather wear something more classic, and even more starry, she would do well to consider this classically beautiful Zuhair Murad gown. I'd pair it with a red lip and a beautiful updo. 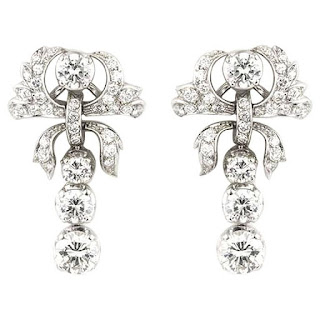 I'd finish the look off with dainty and pretty 1950s diamond drops. This would be an outfit that's truly "no ragrets."