A New Headboard for Valentine's 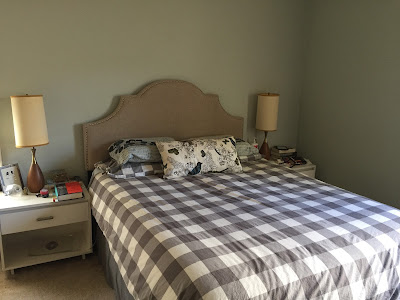 Hey, hey! Something new in our house! After two years (TWO YEARS) we finally decided to get a new headboard for our master bedroom and I'm not joking when I say I've literally been sleeping better ever since.

We decided not to get each other Valentine's Day presents, and instead get something for both of us. Our old headboard (that I made by myself!) blended into the wall color too closely, so it ended up living in the guest room. I had started to feel like our master bedroom was looking more like a dorm than the master of people who have been married almost seven years, so a new headboard felt like the right home purchase to cross off the list.

As with all things I'm involved with, this headboard purchase came with plenty of inadvertently hilarious hiccups. After comparing about 100 nearly identical oatmeal-colored headboards, we settled on this Safavieh Hallmar headboard studded with silver nailhead, which is available through several websites. I guess I forgot to check the shipping address and didn't expect it to arrive before Feb. 17.

So you can imagine my surprise when I received a phone call from an unfamiliar number on Valentine's Day, picked it up and it turned out to be the very nice girl who lives in our old apartment. Bless this sainted woman, but she thought she'd received a surprise Valentine's package and signed for it before the FedEx delivery man revealed the gigantic box. Once she got it inside her apartment, she found my number on the packing slip, gave me a call and agreed my (also sainted) husband could go pick it up. Nicest. Woman. Ever.

What I hadn't told you yet is that the same thing happened at Christmas, when my grandpa somehow accidentally shipped my gift there and I made Sean go pick it up. Let's just say we're all going to pay closer attention to shipping addresses and I definitely mailed that girl a Starbucks gift card for her troubles.

Let's timehop to see the evolution of the master, shall we? 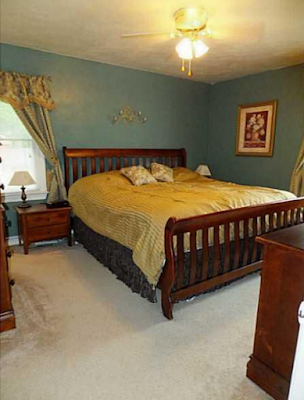 The previous owners painted the room hunter green and had a king-sized bed, which made the room feel quite a bit smaller. 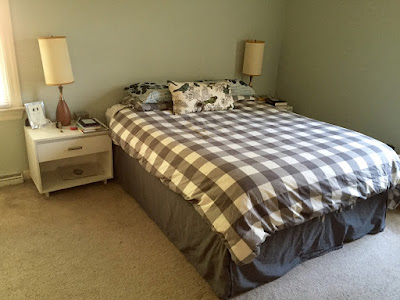 We painted the room Sherwin Williams Sea Salt and, just to switch things up, traded our very girly pinched pleat duvet for a gray buffalo check. It's on its way, but definitely still needs some kind of window treatment, a new ceiling fan that is not hideous and (way down the line, maybe never) new carpet.
Posted by Amber at 9:00 AM

Please let me know thank you.