As we readied for bed on Election Night, I sobbed to my husband that the outcome was an invalidation of everything I believed in: the power of education, compassionate care for the least privileged among us and of course, the lie that a woman with a nearly perfect resume could hold the highest office in the land. I was heartbroken in a way I hadn't experienced since break-ups in college. This was more painful; this was a crisis of faith.

I was resolved, however. It became clear to me — clearer than ever before — that I had been the most passive of believers. If being a participant in democracy could be compared to being a participant in a religion, I was the one who only came on Christmas and Easter. I showed up for Election Day. I believed activism through journalism counted (and sometimes it does). I believed working for a nonprofit was enough.

And then I saw the outline for the first 100 days. It was too scary to read, so I stopped reading it. I pressed forward through Christmas and the New Year. As Jan. 20 neared, I tried to put it out of my mind. I had a plan: I was going to devote each month of 2017 to a different cause, either through money, advocacy or volunteerism.

I didn't watch the inauguration, at least not on purpose, although social media has a way of hammering hard against anything you tried to avoid. Instead, I prepared. I ordered a "Future is Female" sweatshirt, because empowerment can come from something as innocuous as padding around your house in an oversized billboard. I watched "Selma" and "Suffragette" and "Confirmation." I took inspiration in those who came before me who stood when it was senseless to stand. I Googled protest signs from the fight for suffrage through the fight for women's lib. I designed my own, featuring a quote from Malala Yousafzai: "We cannot all succeed when half of us are held back." I had it printed at Office Max, a true show of privilege if ever there was one. 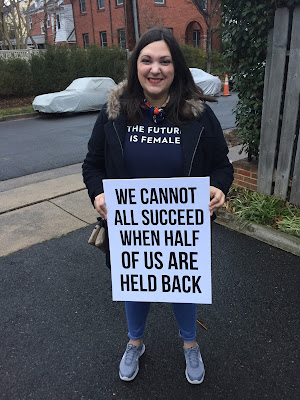 On Saturday morning, Jan. 21, I woke at 5:30 a.m. to get ready to join a group of girlfriends for the Women's March in Washington. I put on my face, because as I told my sister-in-law, if I end up in historic pictures, I better look fantastic. I wore my Future is Female sweatshirt, my vintage equestrian scarf in case somehow the entire thing went really south and I needed to protect myself from teargas, my tiny purse stuffed with protein bars and a water bottle attached with a carabiner.

With my friends Holly and Bonnie, I walked to the metro stop anxious to see if a crowd had already formed, if the lines would be unruly, if we'd struggle to get a seat. None of that happened. On the train, we easily found seats and chatted with a family from upstate New York. The daughter worked for Slate and snapped pictures of people's signs. The mother had a clear bag with healthy snacks. 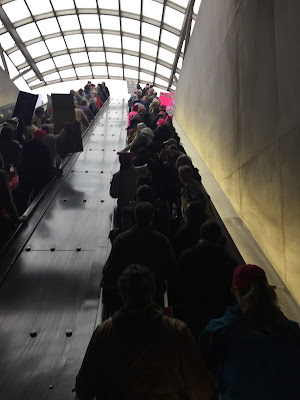 When we arrived at L'Enfant Plaza, we exited the train to see a sea of people just like us except all different colors, genders, shapes and sizes. Many wore pink hats, meant to co-opt and subvert the President's use of the word "pussy." And we screamed. Joyous, girlish screams normally reserved for pop stars, but for that day, they were squeals of delight at taking everything we've whispered about and sent covert emails about and talked about in wine clubs and book clubs: we were going to take a stand against the patriarchy.

We wandered, wide-eyed and amazed to see a world of people who felt just like us. We met up with Katie, Emily and Sonia. The six of us edged our way toward the stage, not getting closer than 4th street, but in view of a screen. Everyone was kind. Everyone had a story. We met a mother and daughter pair from Atlanta; the daughter is an education outreach coordinator for a theater company and the mom is an environmental scientist who marched in the 70s. We made friends in the crowd and never learned their names, but shared chocolate and said "excuse me" and nodded in empathy when we needed to stretch and screamed wildly when Ashley Judd questioned why we pay taxes for our tampons when men don't pay taxes for Viagra. 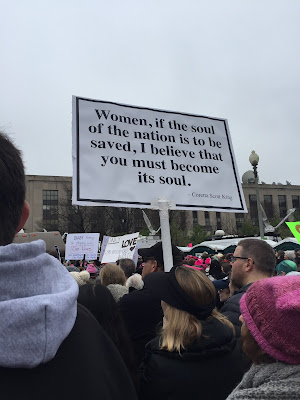 Eventually, the hours of speeches couldn't contain the anxious need to march and we tried. But there were too many of us. We could not be contained to the permitted route. I told Bonnie this may be a moment for civil disobedience. We wandered off the route toward the Hirshhorn Museum. From there, we watched Madonna say crazy things and then aptly perform "Express Yourself" and "Human Nature." We went to the mall, where people were milling about with their signs, waiting patiently for Port-a-Potties. A woman came out of one and handed me some toilet paper from her purse. 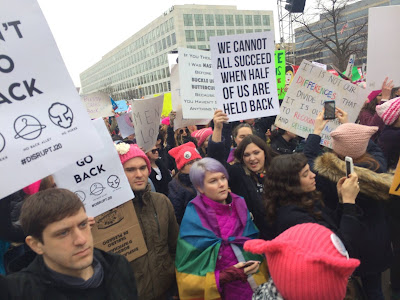 We decided to walk toward Gallery Place, thinking the tourists won't know to walk so far for food, and were stunned to see the march was still happening. But instead of marching on the designated route, it was happening on four parallel blocks. Thousands and thousands of people marching toward the White House on Independence, Constitution, Pennsylvania, E Street. For the entire day we were there, I never saw someone who didn't appear to be affiliated with the march.

Lines stretched out of every restaurant we passed, so when we noticed the Gallery Place metro wasn't packed, we decided to seize the moment and head home. It was almost 5 p.m. when we arrived at a pizza place near the metro stop and within a few minutes of sitting down, a man jokingly asked me about my sign, saying, "So you don't think that's a little anti-men?" His wife laughingly apologized and said he's feeling a little left out today.

And some people ask why we march. 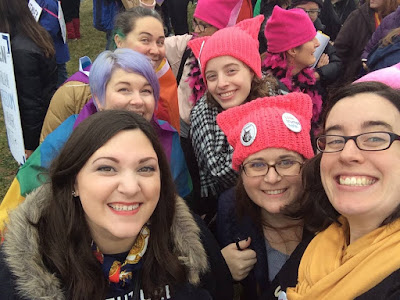 The high of that kind of communion of the human spirit kept me floating for a day. I read all the coverage and saw all the signs on Buzzfeed. I marveled that we did it: we had marches around the world, attended by millions, all peaceful with no arrests. And then proceeded the ugliest and most horrific week of my life since 9/11.

Over the course of the President's first week in office, he signed executive orders progressively more horrific and wide-ranging in their damage to everything America is supposed to stand for, and my head is spinning. He issued gag orders to government agencies and rogue employees started their own Twitter accounts. He spent the better part of the week insisting it can't possibly be true that he wasn't elected by the popular vote and that he had a comparatively tiny turnout for his inauguration. He banned Muslim refugees. Let me type that again: on International Holocaust Remembrance Day, he banned refugees, some of whom were literally flying on planes to the U.S. after years of separation from their families only to be detained at the airport.

I spent every day of the first seven days signing petitions, calling congressional representatives, sharing, posting, liking, Tweeting, commenting, donating. Is this my new normal? Maybe it should be.