I was exhausted from my trip to New York and New Jersey (more on that later), so I completely missed the red carpet while I was napping. As a result, it's entirely possible there were people who looked horrible and wonderful that I just straight up never saw. All in all, I felt as I always do that originality has suffered a bit from the presence of stylists (how else to explain the endless parade of red gowns?), but it also means everyone looks at least decent. Here are the highs and lows as I see it: 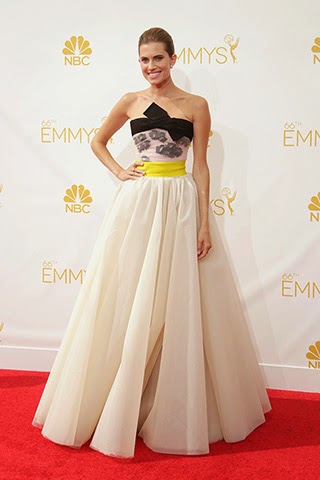 Allison Williams has shown pitch perfect taste since her first foray into red carpet fashion; I'm sure it helps when Dad is perennially listed on the International Best Dressed List. I loved her choice of this classic, yet youthful Giambattista Valli gown. The shape colors call to mind Audrey Hepburn in Sabrina, but the acid yellow sash keeps it edgy and current. Pretty and simple studs were the right choice for accessories. 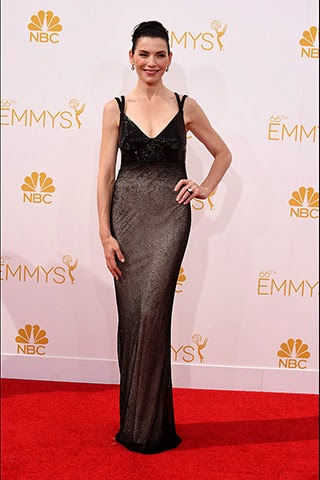 I love when a star and a designer have a true working relationship. Julianna Margulies and Narcisco Rodriguez have been kicking it since her ER days, and this gown was a fruitful result of their long working relationship. It started with a great slinky fit, then added interest with the details of the beading, the sexy back (not shown) and it looked great on television. I give it an A plus plus! 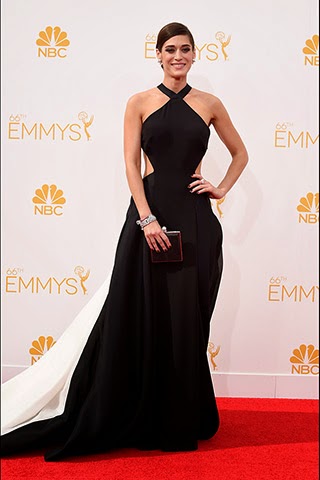 I thought Lizzy Caplan's Donna Karan gown was the perfect dress for her character: strong, sexy, appropriate but still teasing. I love her accessories of the bracelet, ring and dark nails and her hair and makeup game was strong, too. You've come a long way, Janis Ian! 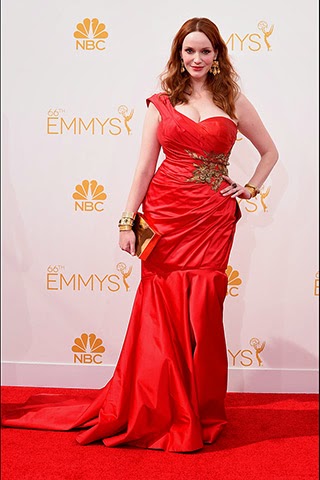 Praise the ladies at Marchesa who seem to have finally solved the riddle of how to celebrate Christina Hendricks' curves! Many designers have failed to rise to the task, saddling her with epic fit problems, terrible colors, unflattering ruffles and who knows what else. This looks great, and I like the gold accessories and sexy, tousled hair. 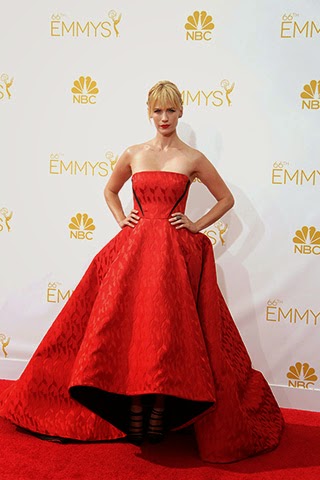 January Jones loves a dress with volume, and loves to play with the high-low hemline. We've seen it many times before, and on a night when seemingly everyone wore red, I almost wish this was violet or something. But, this is one of the best dresses she's ever worn and she doesn't even look entirely miserable like normal! So I'm giving this gown its due. 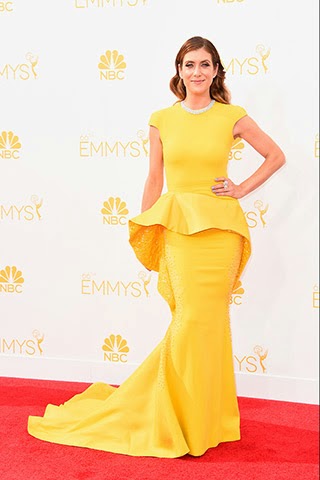 I wasn't in love with her hair or make-up, but I did really like the architectural quality of Kate Walsh's Stephane Rolland gown. Not everyone can pull off Big Bird yellow, but I liked the pop of color. 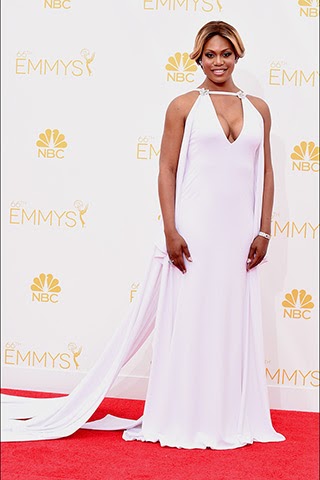 Laverne Cox's nomination was historic, and I love that she dressed for the moment! Her Marc Bouwer gown was angelic and classic, with really beautiful hair and makeup. She was just glowing. 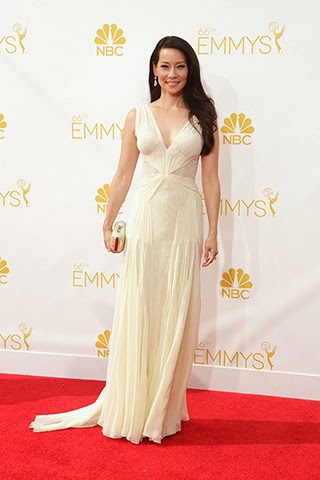 Lucy Liu didn't pull out all the stops in this simple Zac Posen draped gown, but I thought it looked gorgeous on TV and had great movement. She looked confident and pretty. 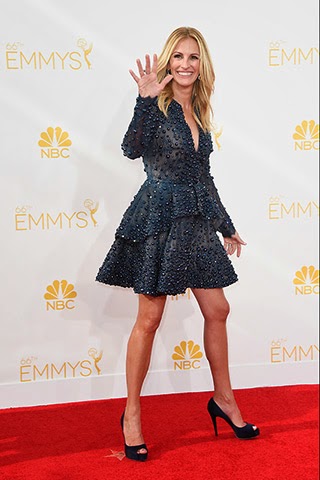 Julia Roberts was looking a little rough for about 90% of last year's awards show circuit...it was almost like she'd been out of the game for so long, she forgot how to play. But she totally focused on her assets in this lovely and fun Elie Saab, highlighting her lovely legs while still seeming completely in line with her usual preference for glamorous simplicity. 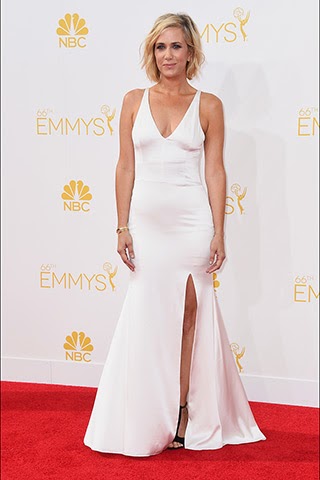 Remember when Kristen Wiig was nominated for everything the year "Bridesmaids" came out and wore dishwater beige dresses everywhere? Yeah, that sucked. She's still clearly a little color-shy, but I thought she looked super California chic in her white Vera Wang gown and her new blonde choppy bob. 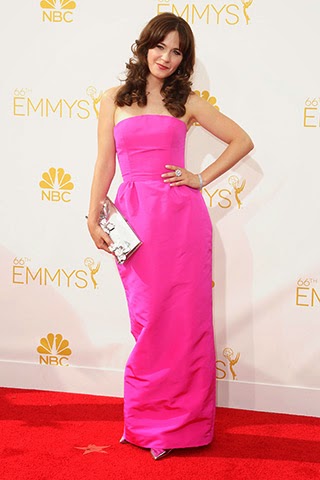 Zooey always wears kind of weirdly unflattering or uninteresting dresses. This Oscar de la Renta wasn't a revelation by any means, but I thought it was a step in the right direction. 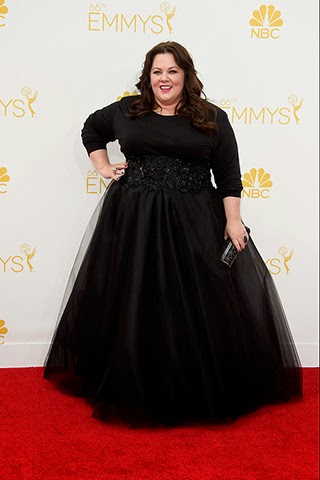 I think this is the prettiest and most elegant Melissa McCarthy has ever looked and it bears noting that this is one of the only times she didn't design the dress herself. This gown is by Marchesa, and I like that they are clearly not afraid of dressing ladies of all shapes and sizes. 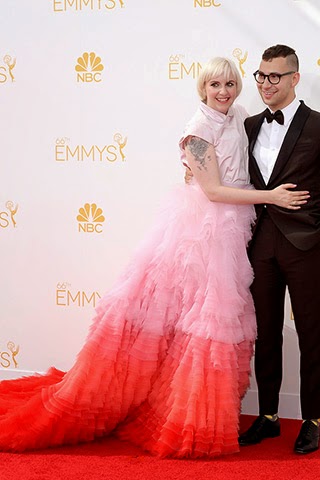 Oh, Lena. Where to begin? I actually love the construction technique of her fluttery Giambattista Valli skirt...I loved the versions in sky blue and chartreuse that he sent down the runway. But this ombre effect reminds me a little of...well...menstruation. And the pairing with an incredibly unflattering pale pink shirt negated any of the skirt's loveliness. And I CANNOT abide this platinum pageboy hairsdo. That's a big nope for me. 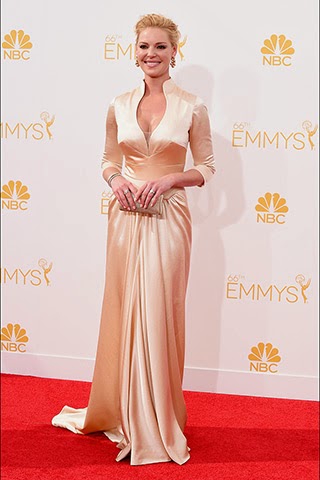 Katherine Heigl has a reputation for being a total piece of work beeyotch to work with, and of course acts like she's been touched by an angel, so in a way this nightie from Disney's Evil Stepmother lingerie collection might actually be perfect. This seemed much more likely to be worn by Ellen Burstyn than by Katherine Heigl, who is supposed to be having a major I'm BAAAAAACK TV moment to promote her new NBC show. 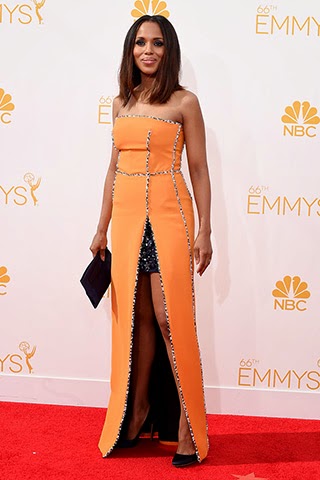 I used to feel like Kerry Washington's fashion game was so strong, but the more confident she gets, the more I think she flops. I pretty much hate everything about this Prada gown, from its unflattering sparkly seams to its Flintstones Push-Up color to the peekaboo Tina Turner costume underneath. Her limp hair didn't help, nor did the blue-tone smoky eye make-up. 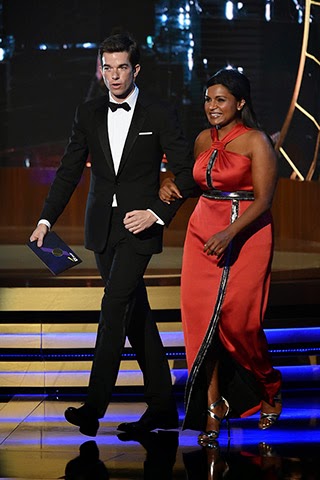 I love love love Mindy Kaling. I follow her on Instagram, and 90% of the time she looks fierce as hell. But this Kenzo gown just did nothing for her. It made her look super short, eliminated her waist, didn't move particularly well and had super weird lines. You deserve better, Mindy!! 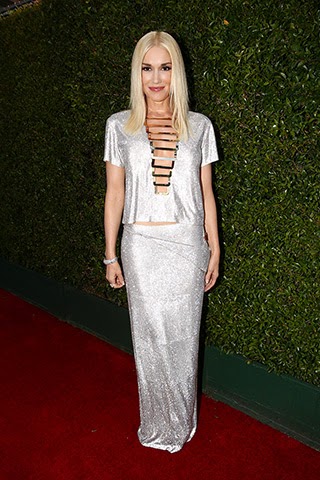 And last but not least, a woman who clearly has been too busy popping out babies to even know who Stephen Colbert is. Gwen said she was channeling Donatella Versace in this Atelier Versace dress, and she certainly nailed the Real Housewife of New Jersey look. None of this is particularly offensive (I'd probably love it on Gwyneth Paltrow), but it wasn't particularly good either.
Posted by Amber at 9:30 AM

i, of course, haven't seen many awards shows since i moved to BFE... therefore I only see the star's fashions through your eyes... i have to say your reviews are better than anybody's and some fashion blog should hire you to write for them... i particularly liked your commentary on Katherine Heigl and Kerry Washington... you'd be delightful even if you hadn't sprung from my loins!