Wow, guys. The Grammy's Red Carpet was such an abysmally boring affair (with a couple predictable exceptions) that I almost didn't write a post at all. I can sum the looks up thusly: Panties as Fashion, Black with Cutouts, No Effort At All.

But what fun is that? There's still thoughts to share and fun to be had. 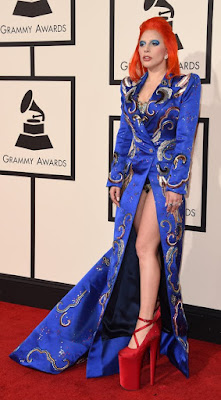 The Grammy's are about fantastical rock and roll, glam fashion and it appears only Lady Gaga got the memo. She stepped out in a pitch-perfect Marc Jacobs coat and platforms that set the tone for the David Bowie tribute she would give later. I am not a fan of seeing everyone's panties as clothing (more on that later), but otherwise, I thought this was right on. 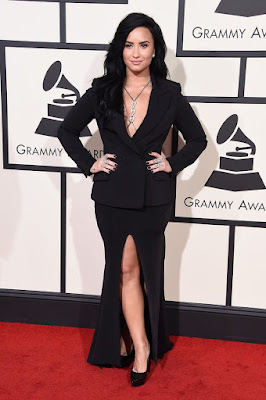 Of the many (MANY) ladies wearing extremely simple black gowns, I thought Demi Lovato's was best. Her make-up is very clean and pretty, the necklace adds some sexy interest and the slit isn't showing me her damn panties like everyone else. The shoes are snoozeville, though, and the overall look has an Addams Family vibe. 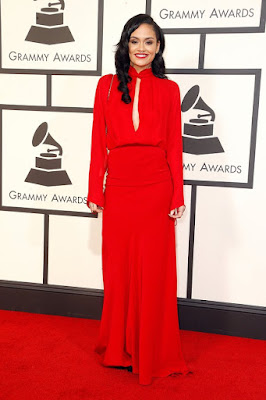 This is the singer Kehlani, who I don't know of at all, but I appreciated the easy glamour of her red Juan Carlos Obando gown. I think it could have used a touch more accessorizing, but it was lovely just the same.

This Givenchy wasn't a mind-blowing jam, but it's cute enough and she looks svelte, honey! Am I the only person who is sorta not loving a middle part on her? I feel like it makes her look like a goofy kid, but maybe I'm crazy. 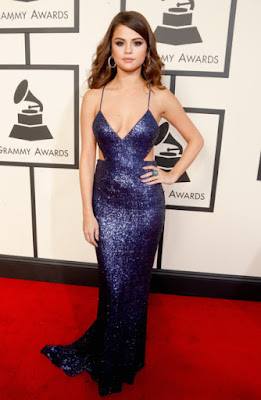 Selena Gomez is working really hard to amp up the sexy in hopes we'll all forget about Wizards of Waverly Place and the Biebs, and this Calvin Klein comes admirably close to being great. The bodice fit isn't amazing, however. 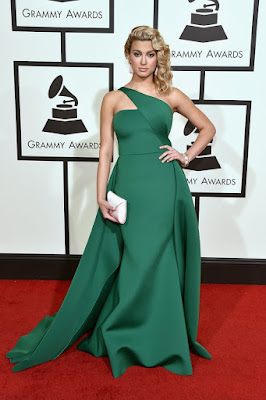 Tori Kelley here is the next inductee in the Resting Bitch Face Hall of Fame. At least her first venture onto a red carpet wasn't a total disaster. It's not really notable, either, but in a night of blahs, I appreciated a color and an interesting shape. This dress is by Gauri and Nainika (yeah, I dunno either). 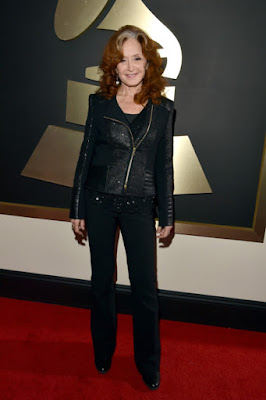 Honorable mention to Bonnie Raitt for being herself and yet still finding a way to add some interest with a super cool sparkly biker jacket. 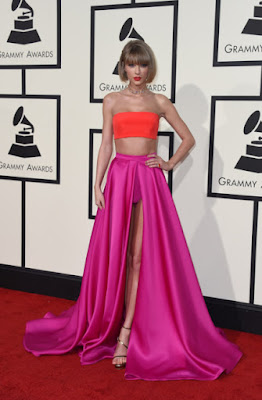 Taylor necessitated the introduction of a never-used category here: The Best/Worst. This is when a rare occurrence leads you to be both the Best and Worst Dressed at the same time. The bob is everything. The make-up is everything. I like the daring colors, and the shoe choice and despite myself, I even like the rainbow-jeweled choker.

She is wearing a very formal bathing suit and cover-up by Atelier Versace and the idea that you would ascend the stairs to retrieve the biggest music award in the land with everyone peeking at your inner thighs in hi-def is just too much for me to abide. I WILL NOT ABIDE IT, TAYLOR. 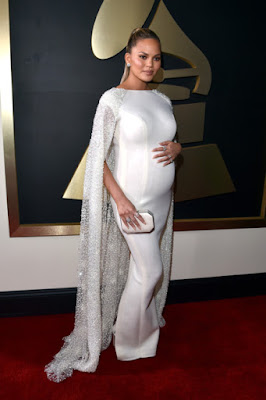 Chrissy Teigen also somehow managed to be the Best and the Worst. I gather she was going for Gwyneth Paltrow Pregnant Angel, and the cape part really is quite lovely. But the seams on that dress are BONKERS. Who on Earth would subject a pregnant lady to such terrible lines cutting across her whole swollen body? Only an enemy. 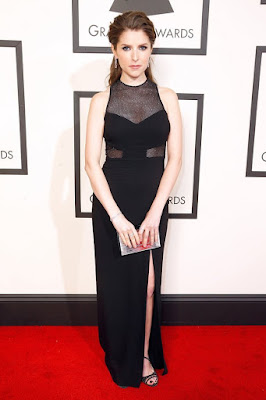 Anna Kendrick looks perfectly fine in this Emanuel Ungaro dress I can only assume she ordered from Rent the Runway. It's fine. It would look smokin' on a normal person at a New Year's Eve party. But for the Grammy's, on a big star? It has me yawning. Her eye make-up is pitch perfect, though (see what I did there????). 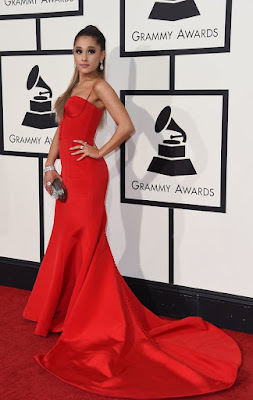 Ariana Grande very pitifully could not walk in her very been-there-done-that Romona Keveza red gown, so much so that by the time she reached the microphone, she was out of breath and flubbing her joke. I also need someone to explain how, after so many years, her hair is still ratchet enough that she can only wear the same extension high pony. It's surreal at this point. Is she going to be wearing it in her 50s? 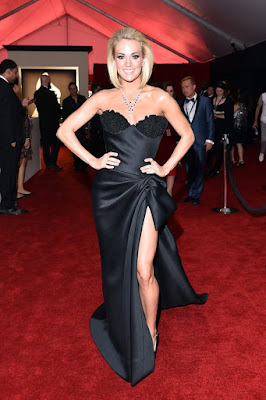 Carrie was having an off night, bless her. Her duet with Sam Hunt was one of the most boring 400 minutes of television I can recall (oh it wasn't that long? It felt that long!). The bodice of this Nicolas Jebran dress seems designed to make her boobs look nonexistent and her hair looks like it was styled by the Fox News team. She's so stunningly and naturally beautiful that it always bums me out when she makes this little missteps. 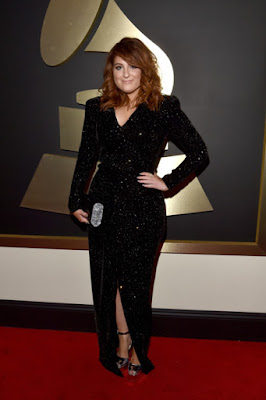 Meghan Trainor basically dressed like she's attending her 40th high school reunion, and the hair color doesn't seem to suit her personality at all. This Michael Costello gown would be perfection on like, Frances McDormand, but seems very mature for her. 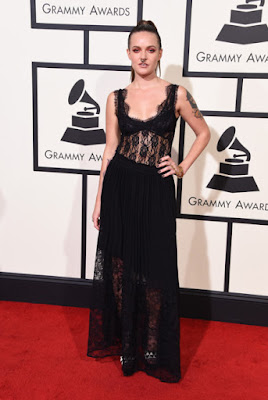 I don't believe women should feel like they have to dress conventionally pretty, but I did think Tove Lo almost overdid it here in terms of appearing incredibly unapproachable. Her red eye make-up + septum piercing + scary gaze are all a bit much when combined. 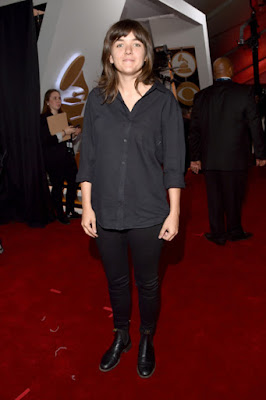 I mean, kudos for being yourself Courtney Barnett, but this shirt doesn't even fit. I don't mind if you dress down for the Grammy's. I do mind when it's something I literally wouldn't wear to do gardening because it looks that shlubby and uncomfortable. If Bonnie Raitt can don a sparkly biker jacket, you can at least iron your shirt. 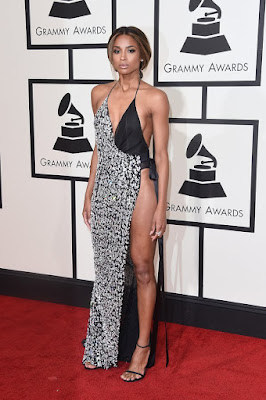 Ciara apparently has no goodies left to hide. Her Alexander Vaulthier leaves little to the imagination and the bit of dress that's left behind just isn't that interesting. This comes off as trying too hard. 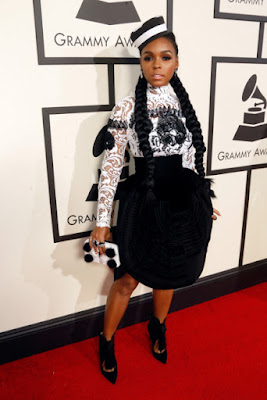 What? I don't even know what's happening here, except that Janelle Monae looks like a bellhop in a Tim Burton-themed hotel. (Which is now a place I want to go.) 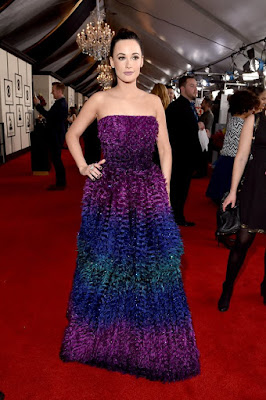 The Muppet murders just will not stop! This awards season is bringing about a bevy of fuzzy and furry and feathery Muppet-y gowns and I am so far unconvinced this is a trend I like. 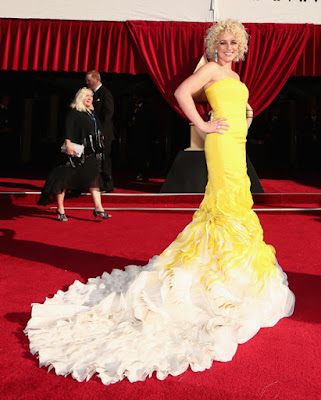 The Internet tells me this ruffled canary is named Cam and is a country singer. Her Georges Chakra gown is the exact wrong shade of yellow to be sophisticated and the ruffles + hair are overwhelming. 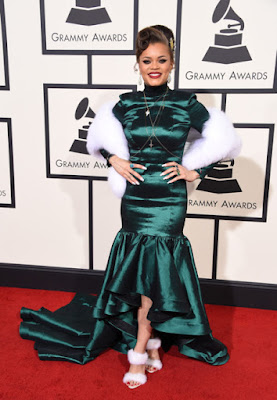 Andra Day had a big night, performing beautifully with Ellie Goulding. She also managed to walk the red carpet in a sexy Vampire Tammy Faye Bakker stars in Sunset Boulevard outfit, something you just don't see enough of these days.

Holy potatoes I agree completely! The undies thing...ugh. But I did love the coordinate choices for Tay Tay. And Tori's RBF was unnerving. Lol. Good writeup hun