Reviewing fashion at the Grammy's always feels a little bit pointless because the point is to walk the line between good and bad. So with that in mind, in this realm, "good" rewards the people who manage to walk that line successfully and "bad" is for people who seemed confused about where they are or what this event is supposed to be. 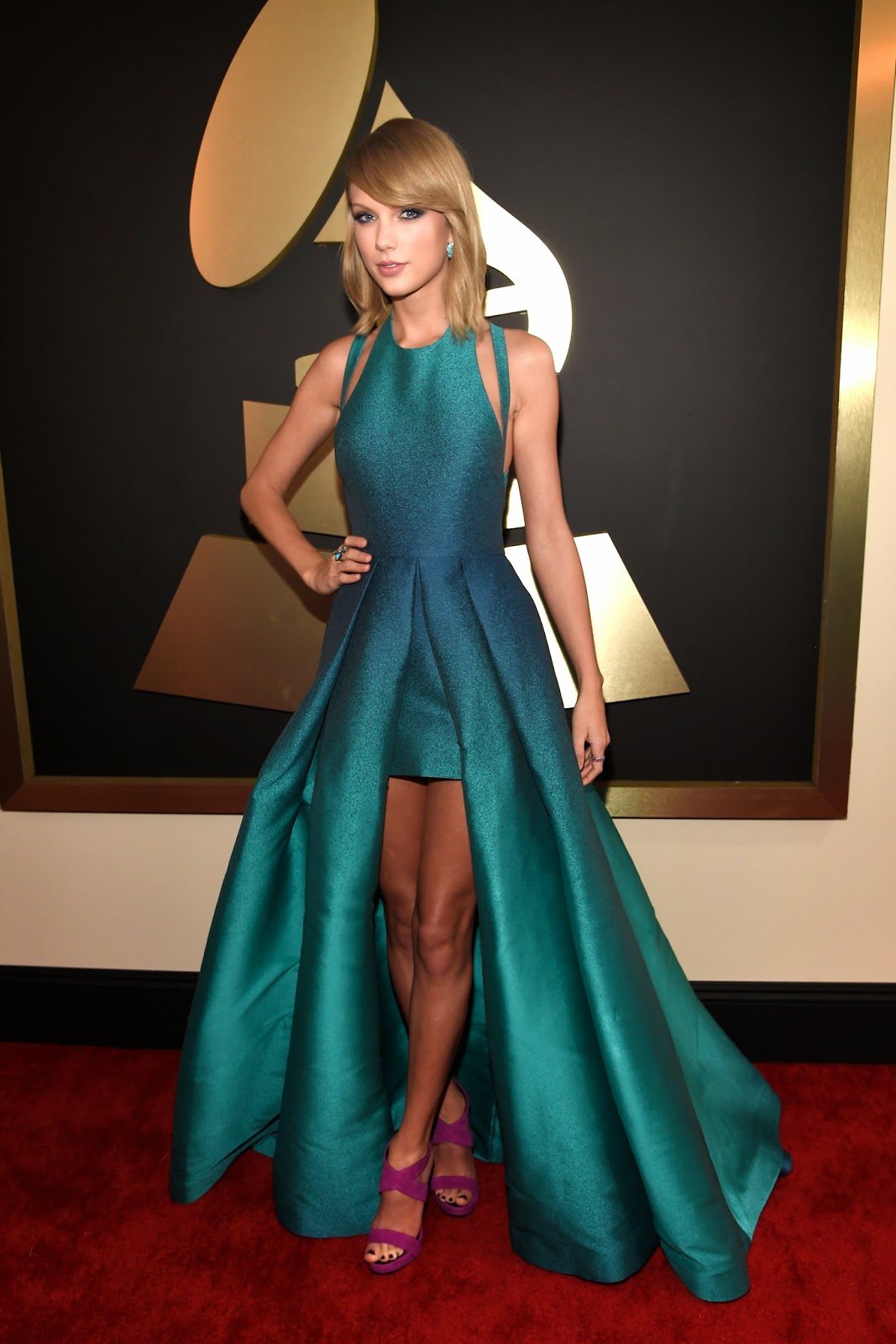 I thought Taylor Swift's custom Elie Saab made her look like an early '90s holiday Barbie in the BEST way. She knows what works for her and exactly how to dress for each event...this was the perfect mix of fun, sexy and glamorous. Also, the pairing of the ombre teal with fuschia pumps was a great move. 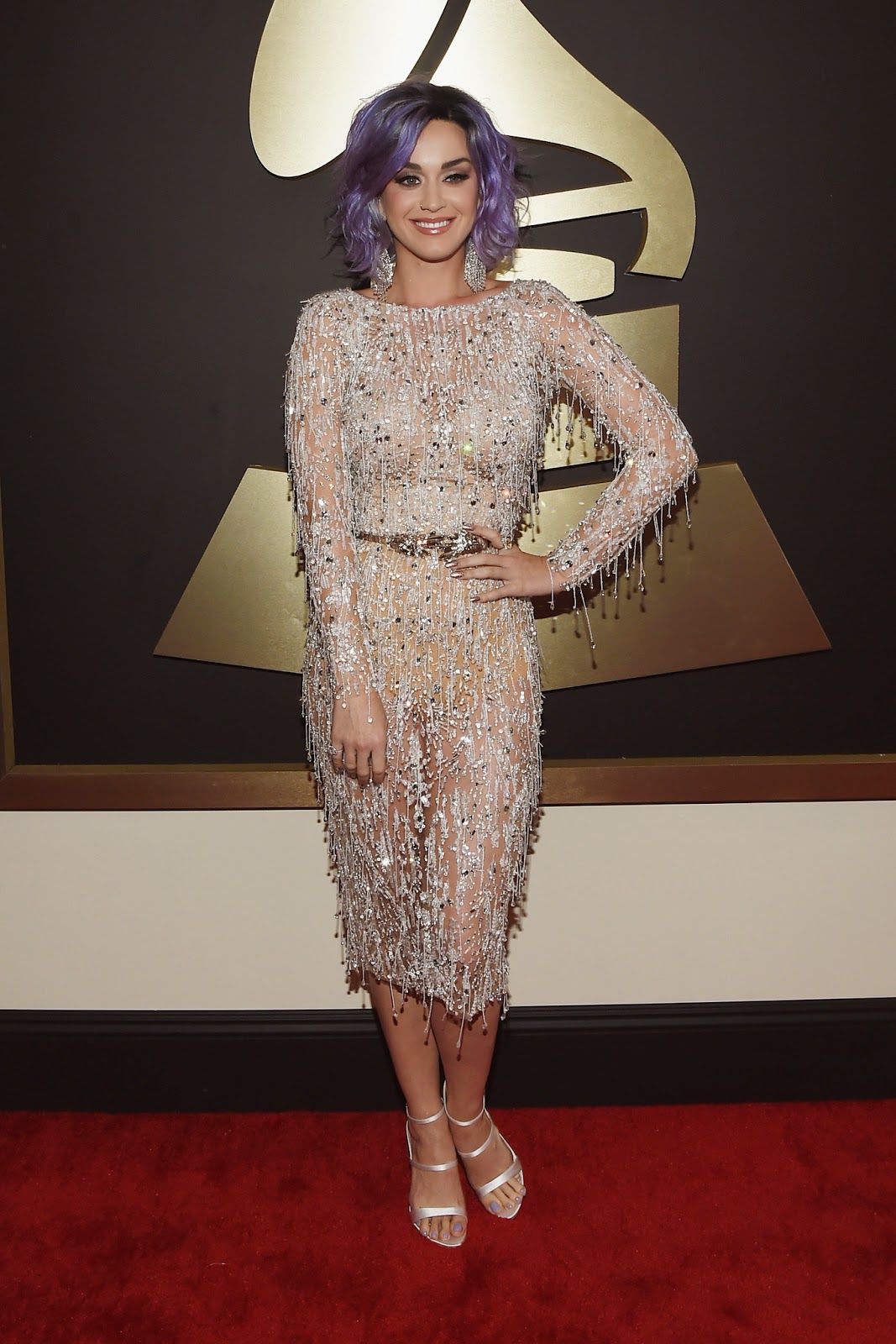 I thought Katy Perry looked like a 21st-century Marilyn Monroe in this sheer Zuhair Murad wiggle dress and her pop of purple hair. It was the perfect convergence of all of her vibes. 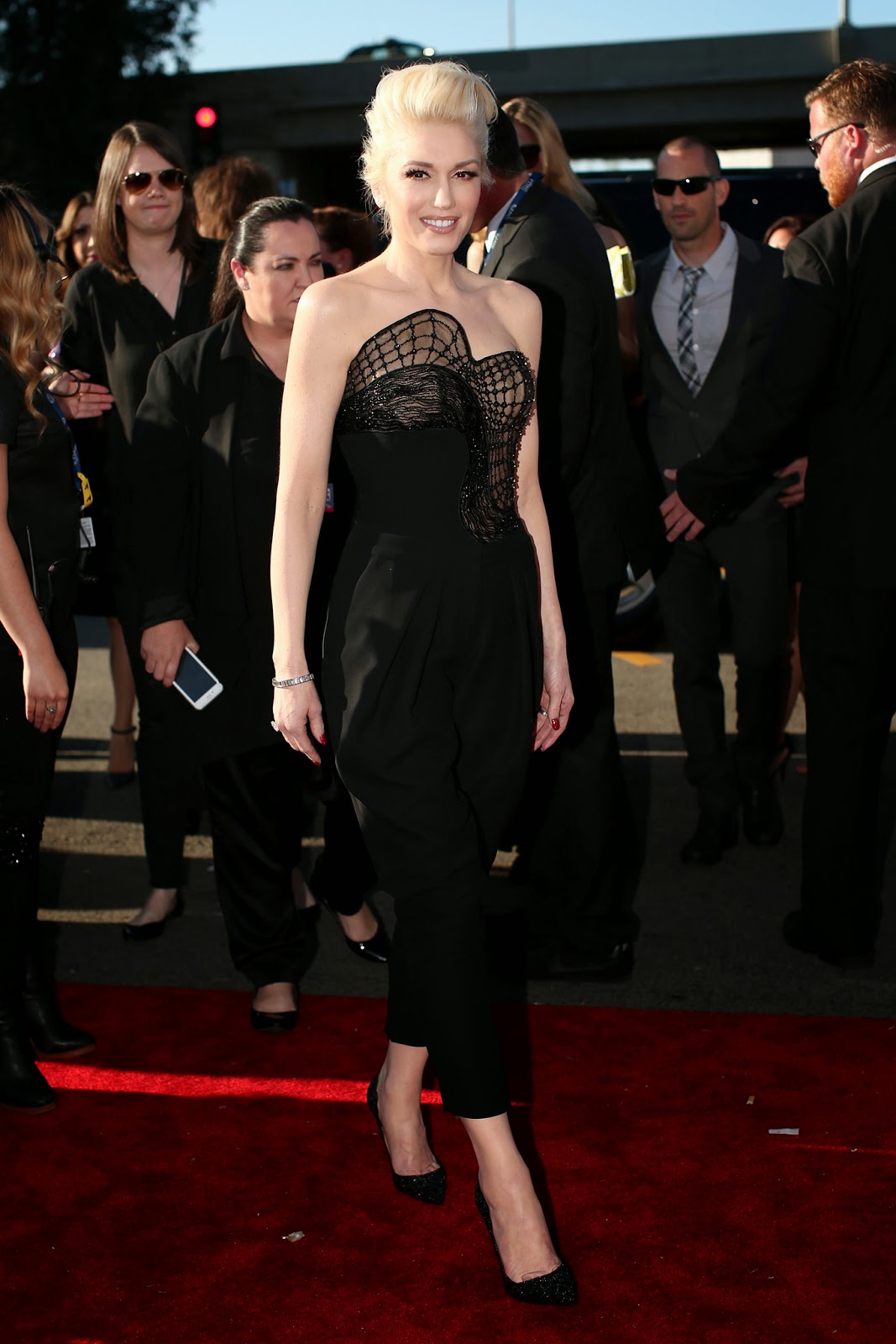 If you're going to wear a pantsuit and you're Gwen Stefani, this is the perfect pantsuit. This Atelier Versace is both vintage-inspired and futuristic, and her gold make-up was a great compliment. 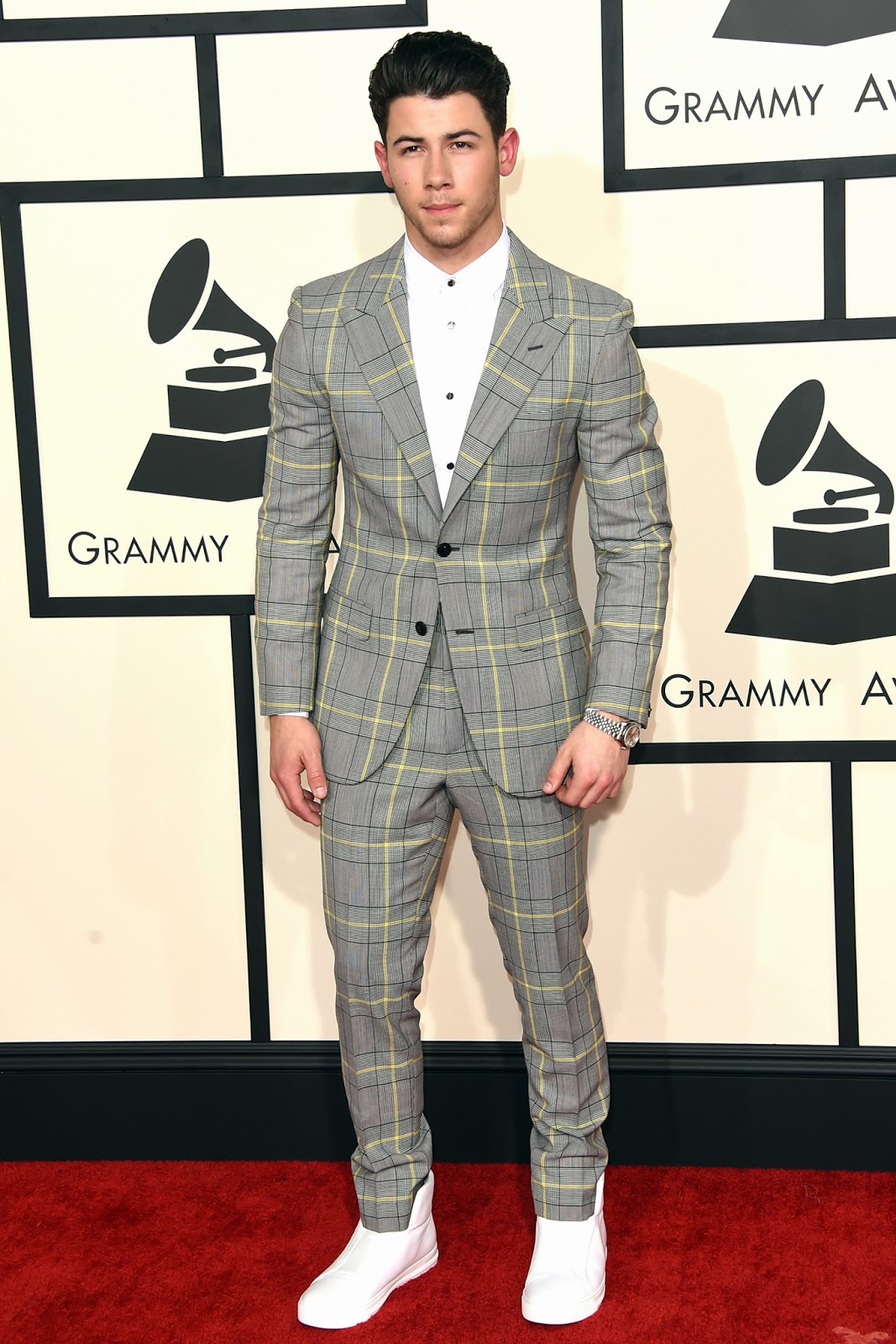 Nick Jonas was my best-dressed male. As soon as he hit the red carpet in this Versace suit, I was like, "dangit Nick Jonas, how did you make me love you?!?" 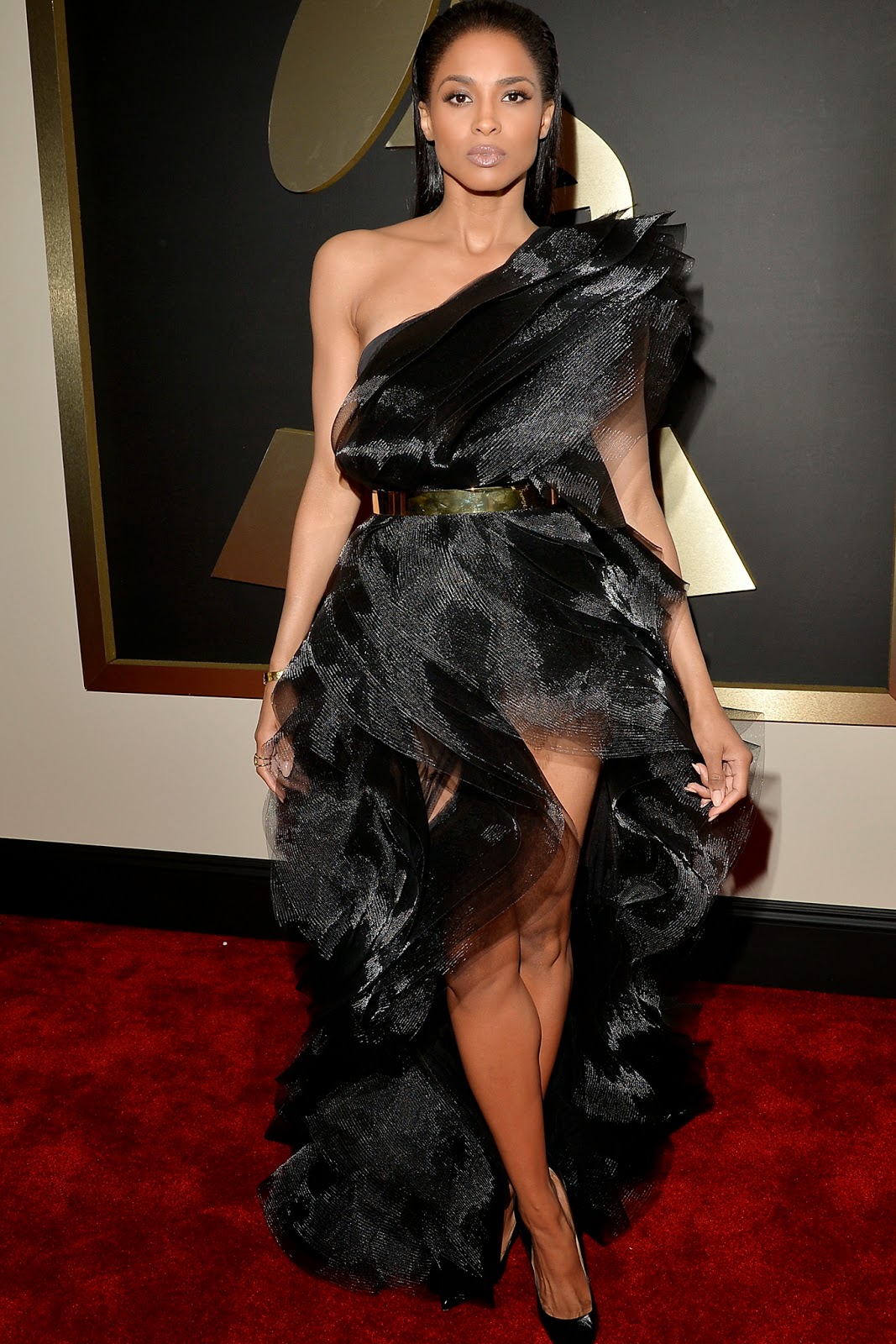 We've kind of seen this dress before, but not on Ciara, so she gets kudos for bringing sexy glamour in this Alexander Vauthier dress. Also, I've never seen her with such dark hair, but it was very striking. 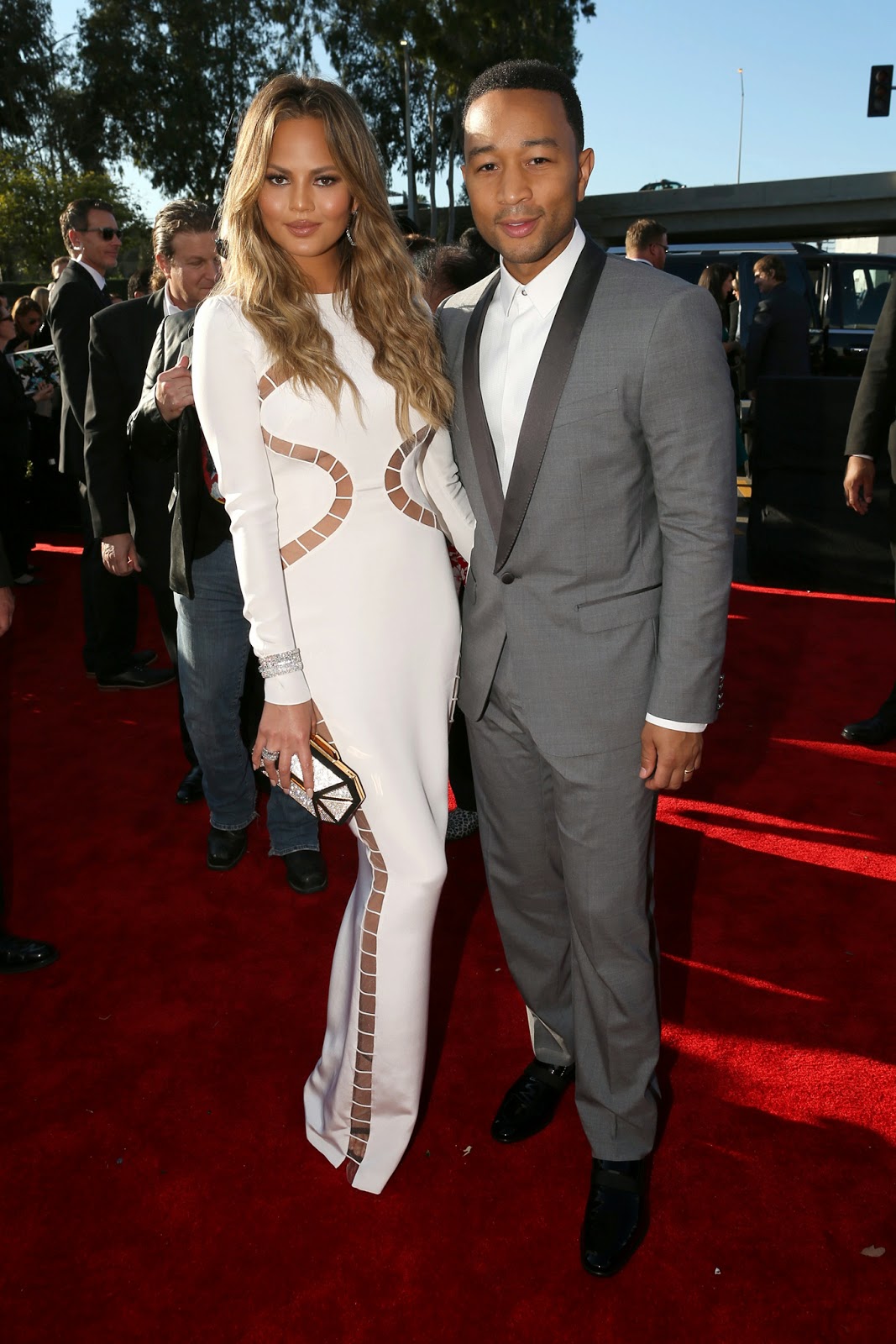 Chrissy Teigen hit the perfect note as a nominee's date in this restrained but super sexy Emilio Pucci gown. She knows she's not supposed to be the one in the spotlight, but she doesn't dress down either. 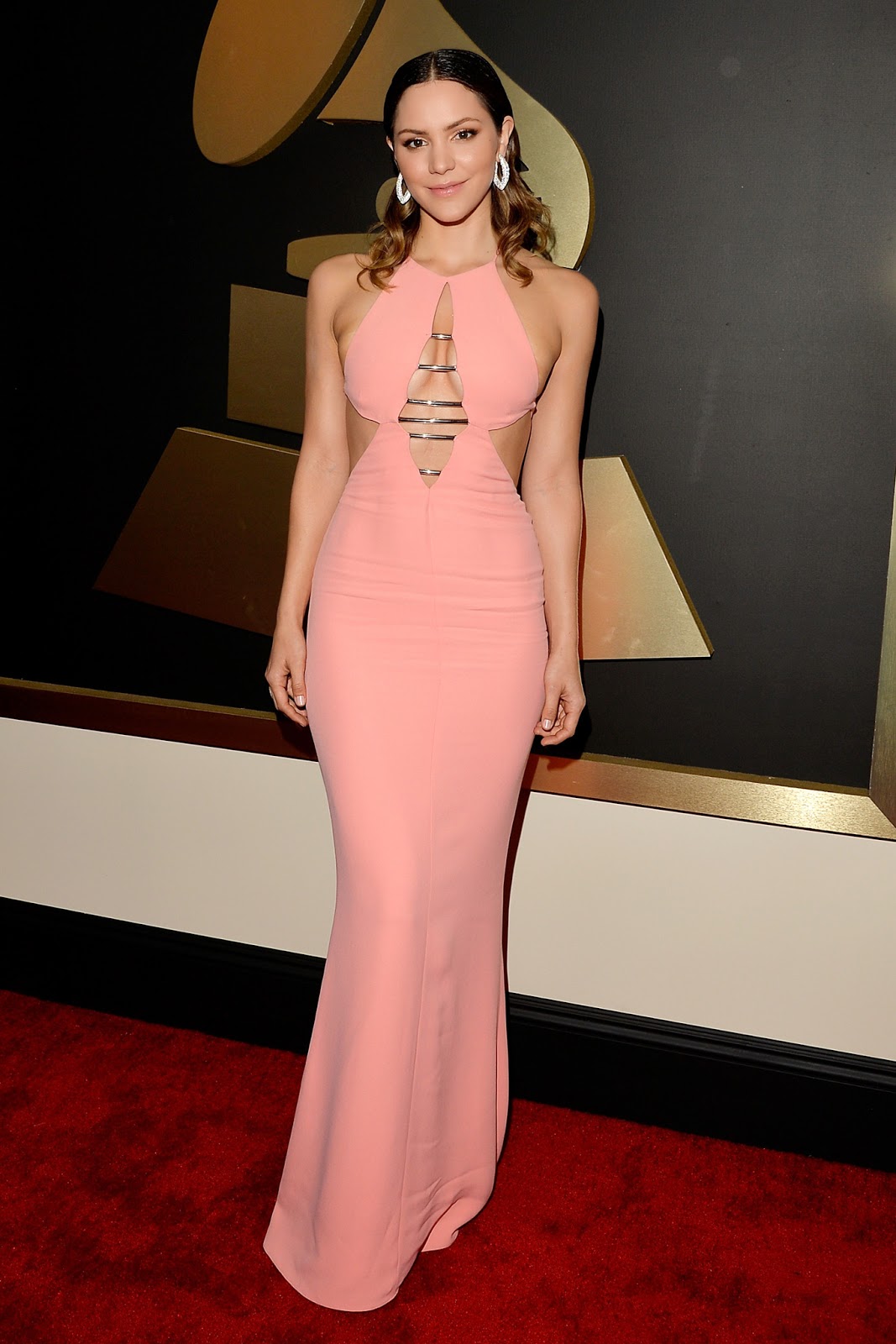 Katharine McPhee also wore a sexy cut-out Pucci gown and I thought it was a cool new direction for her. She's not normally one to be little miss sexpot, so I thought it was right on target for the event. 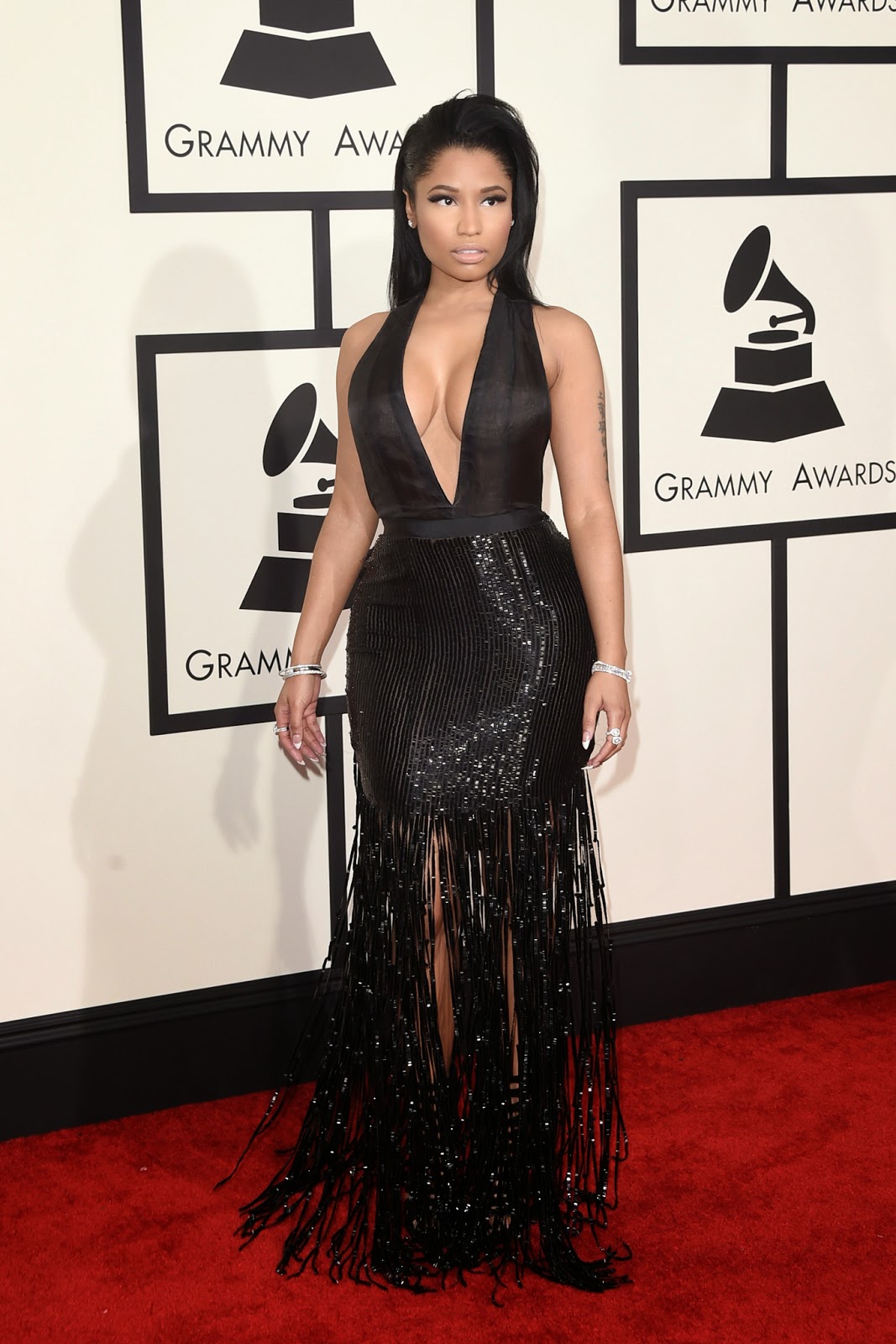 Like Ciara, Nicki Minaj ditched the colored locks and overdone makeup for a (demure for her) Tom Ford dress that would be perfect for a Bob Fosse musical. I thought this was a sleek turn for her.

I'm On the Fence 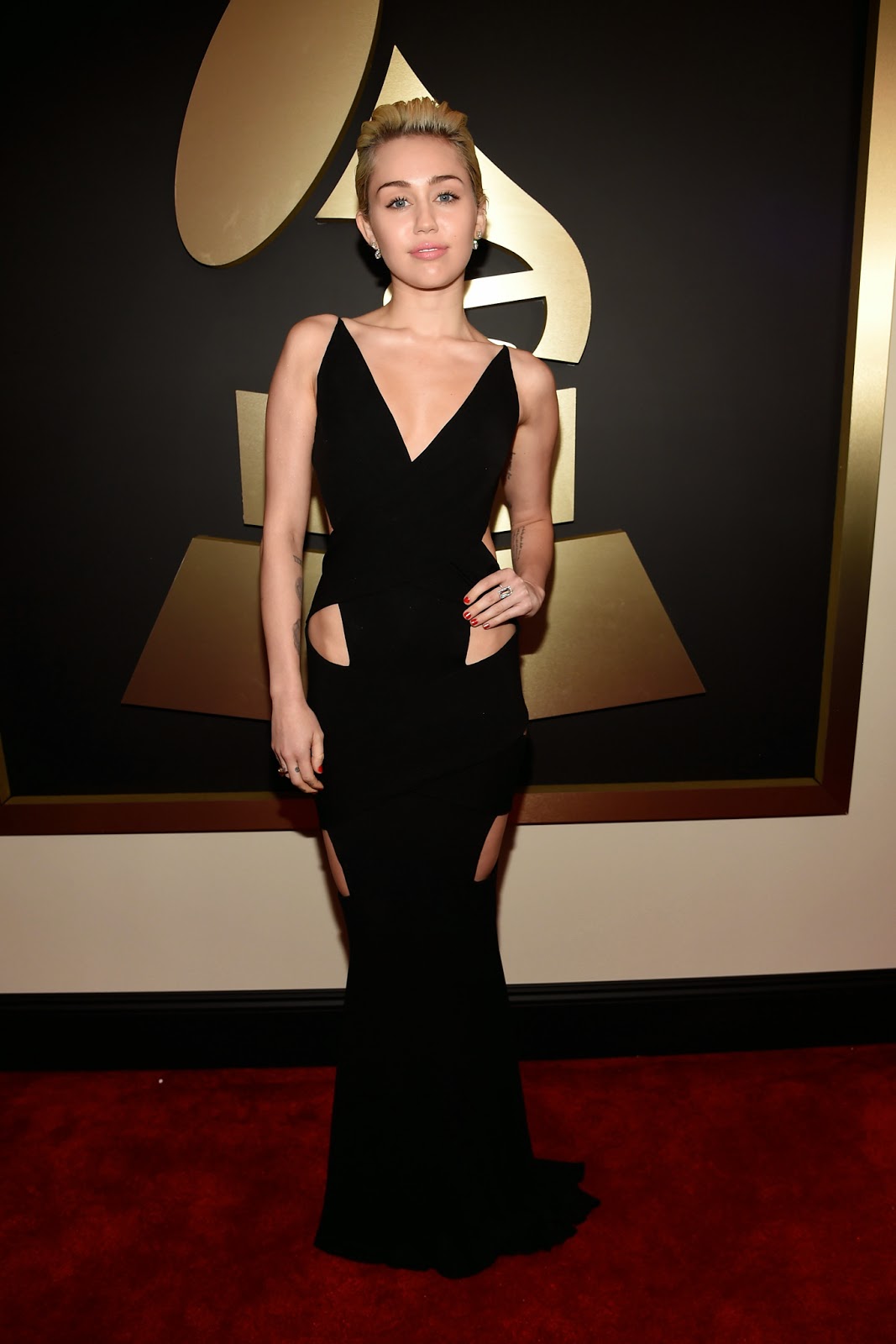 If the whole point of a rock and roll awards show is to push the envelope, then how can I fault Miley Cyrus's hint of hipbones in this sexy Alexander Vauthier dress. But...ughhhhhh such a weird area to highlight. I just can't quite get on board. 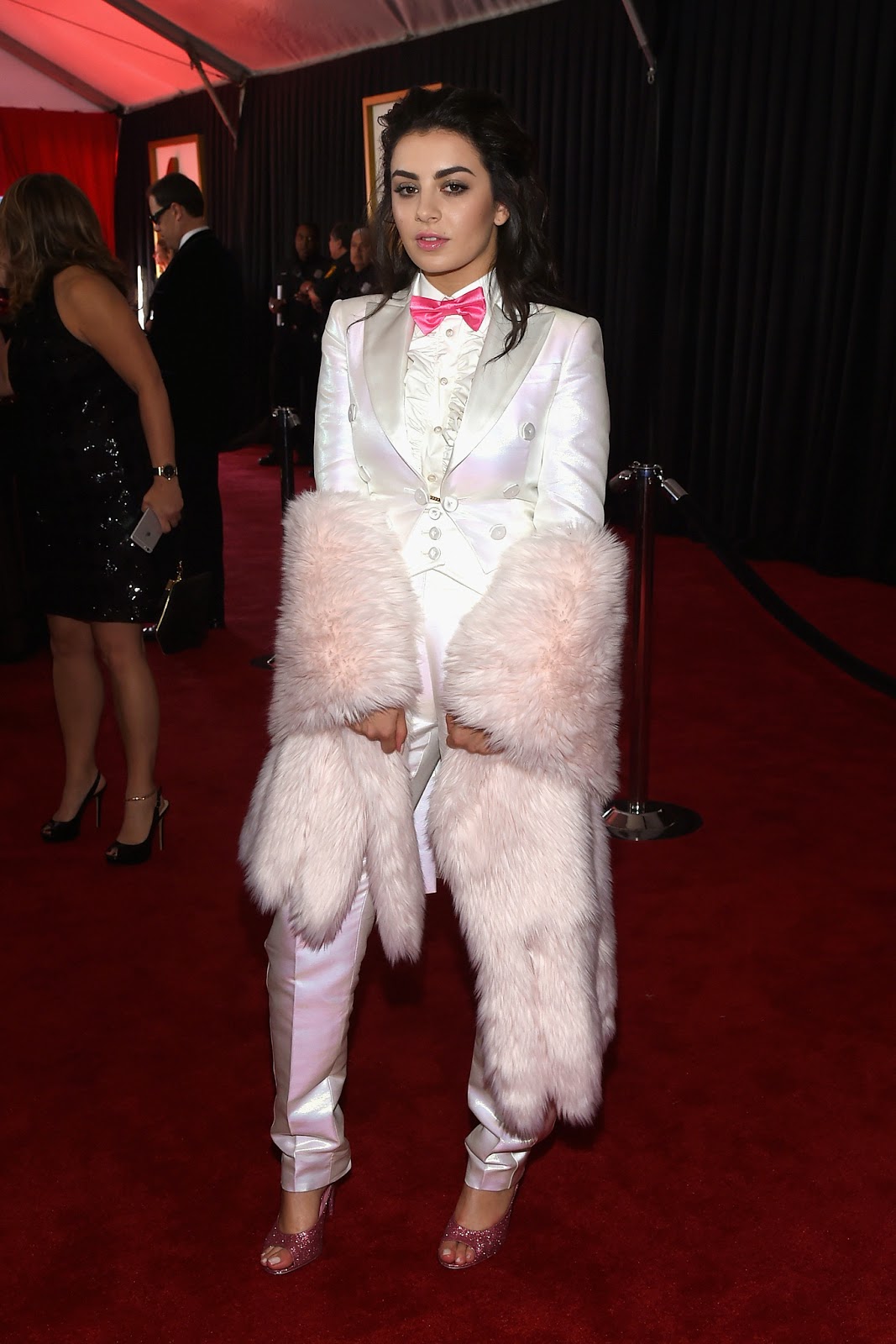 At any other event on any other person, Charli XCX's pink-tinged tux and fur combo would seem ridiculous. But it's kind of perfect for the Grammys, right? You can imagine Little Richard wearing the same thing in 1963. 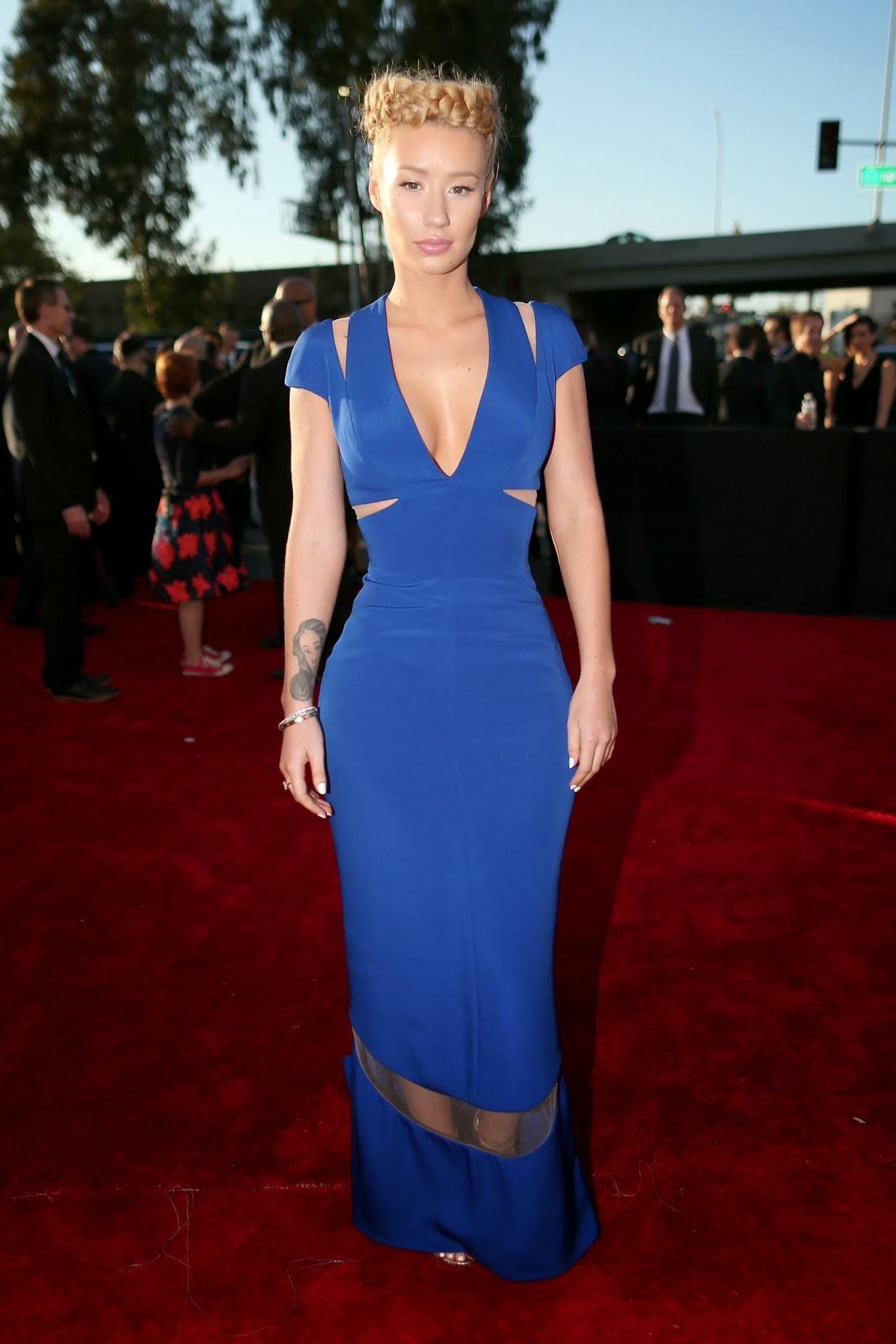 I think Iggy Azalea's Giorgio Armani is actually great. It's got the cut-out trend, a great color, a fabulous fit and feels like a good choice for a first-time nominee. But the challah roll on her head was so utterly distracting, it threatened to negate any good vibes from the dress. 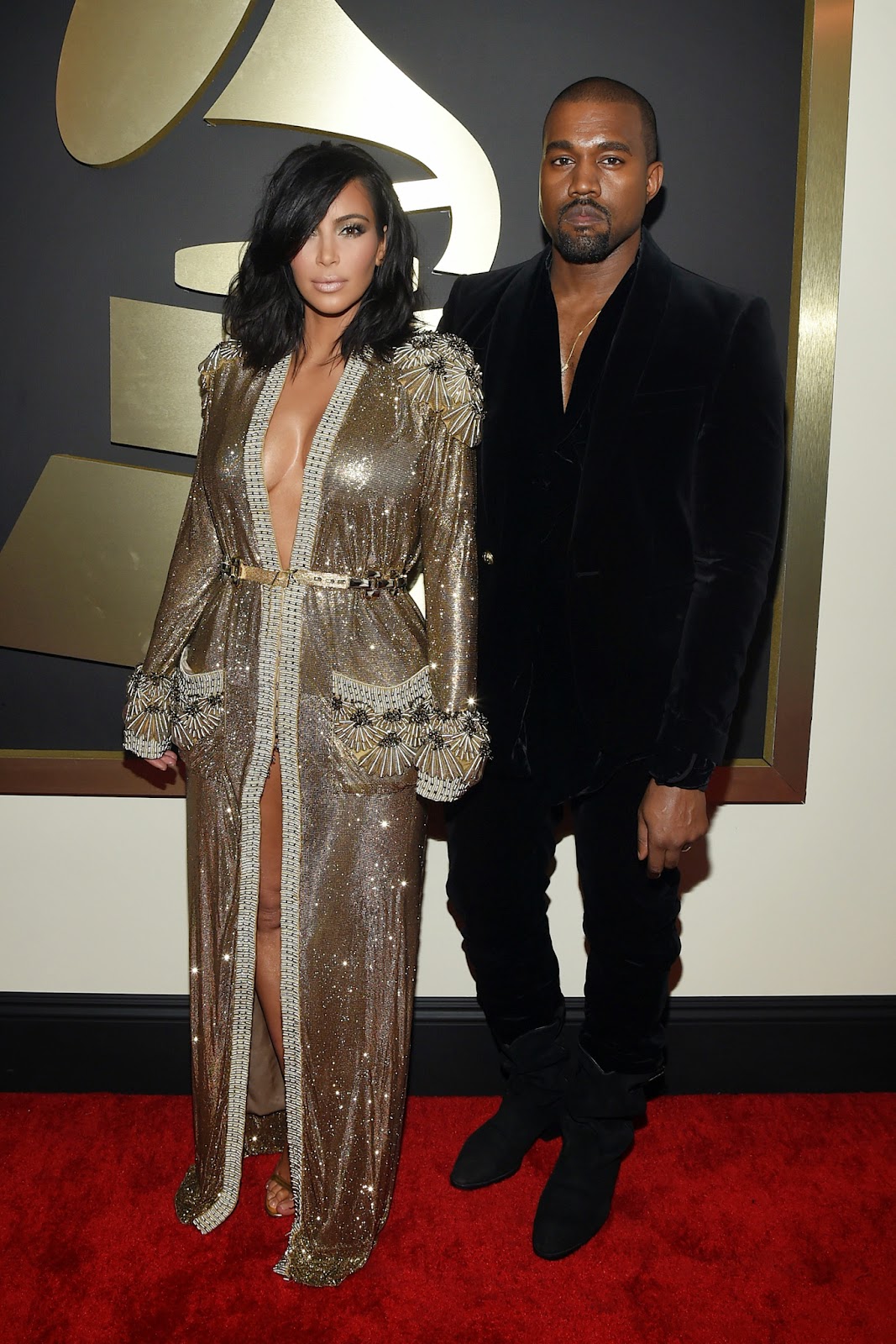 I like when people actually wear legit couture, but this Jean Paul Gaulthier was not working on Kim, who looks like she's swimming in a heavyweight robe made by Elvis's jumpsuit designer for Apollo Creed. 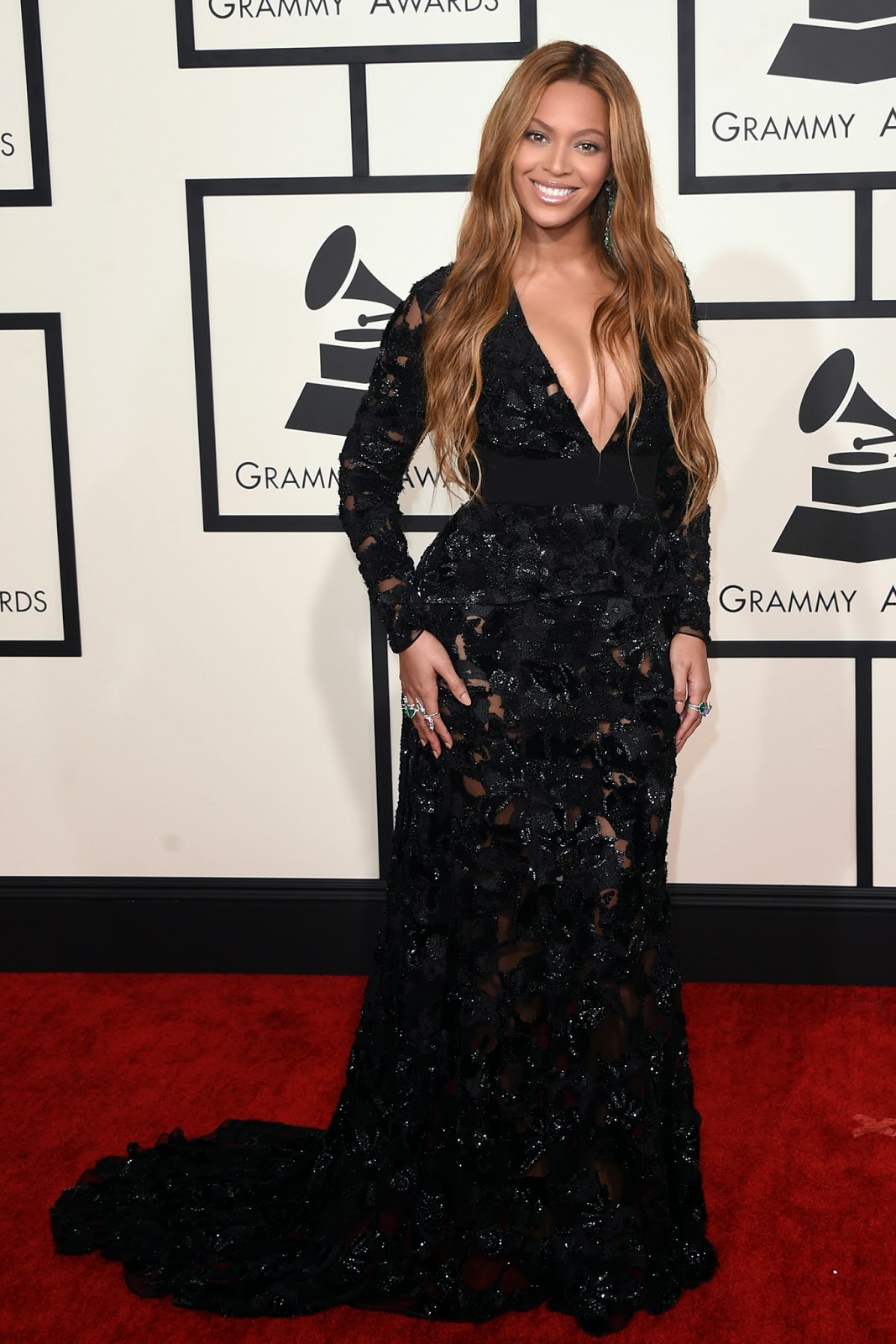 I thought Beyonce kind of phoned it in with her Proenza Schouler gown...she hasn't seemed to have a lot of fun with red carpet fashion in the last few years. Maybe it's on purpose so that we're all extra blown away once she hits the stage? 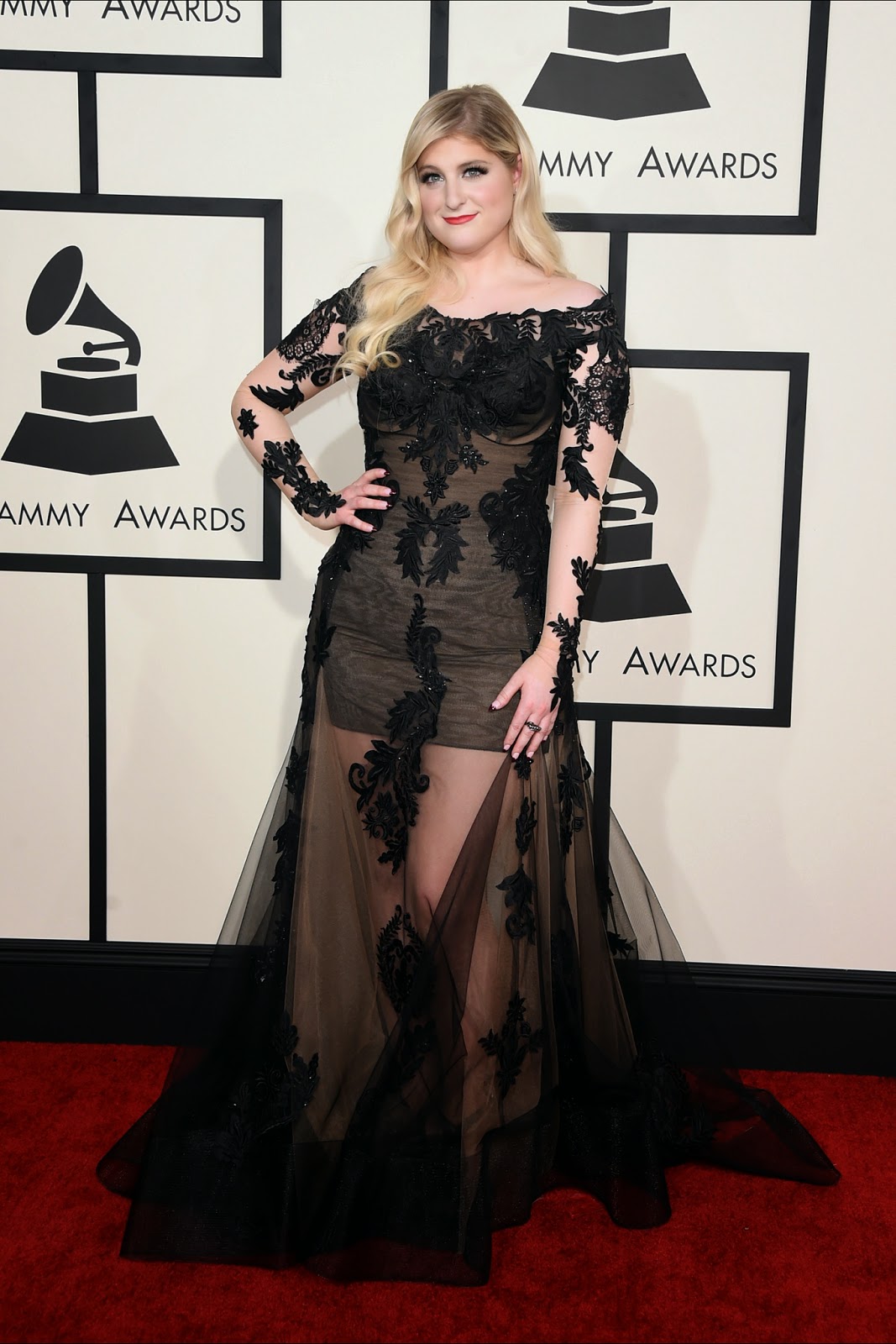 I know it was her first chance to do a really glamorous event like this, but Meghan Trainor's look felt way overdone for me. Her make-up especially felt heavy-handed on camera and this just seemed more appropriate for Penelope Cruz at the Oscars. 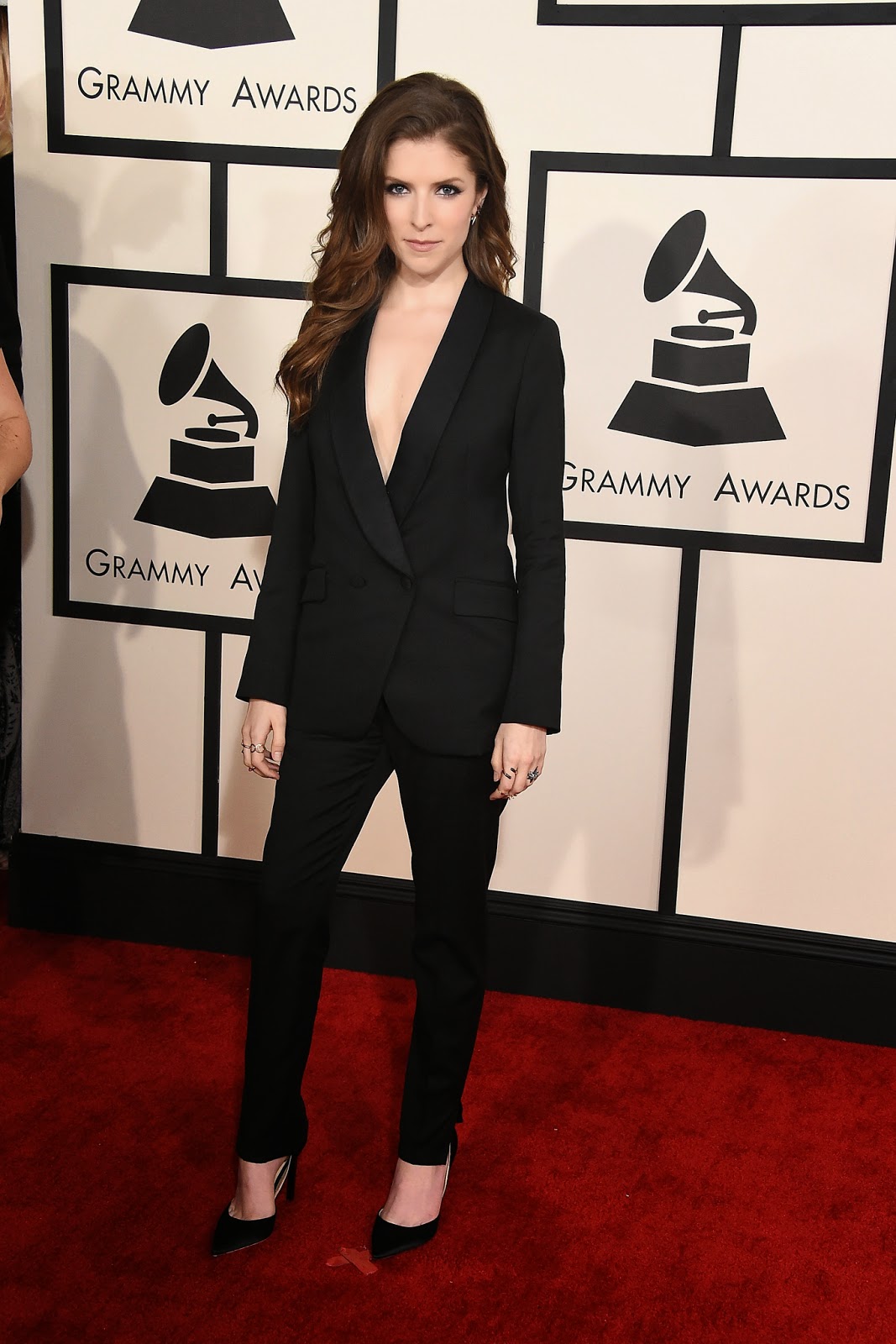 Anna Kendrick's sexy take on the tuxedo actually skewed too business-like for me. It legit looks like an interview suit, minus a button-up shirt. She could have had some fun with a long sexy necklace or killer shoes. 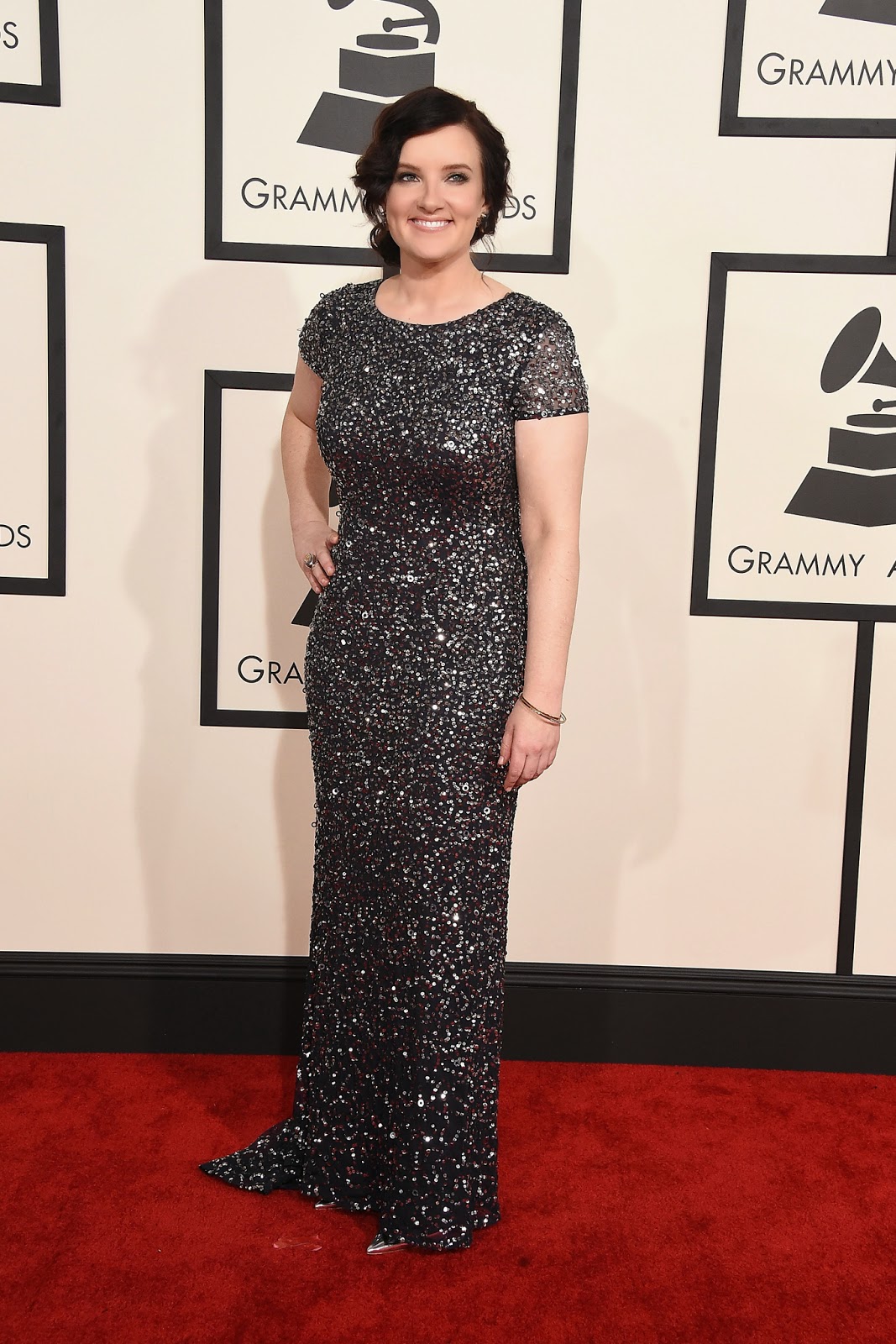 First-time nominee Brandy Clark missed the chance to really have some fun with this overly demure sparkly gown and dowdy styling. With a sleek bob, this could have seemed edgy, proving it's all in the styling. 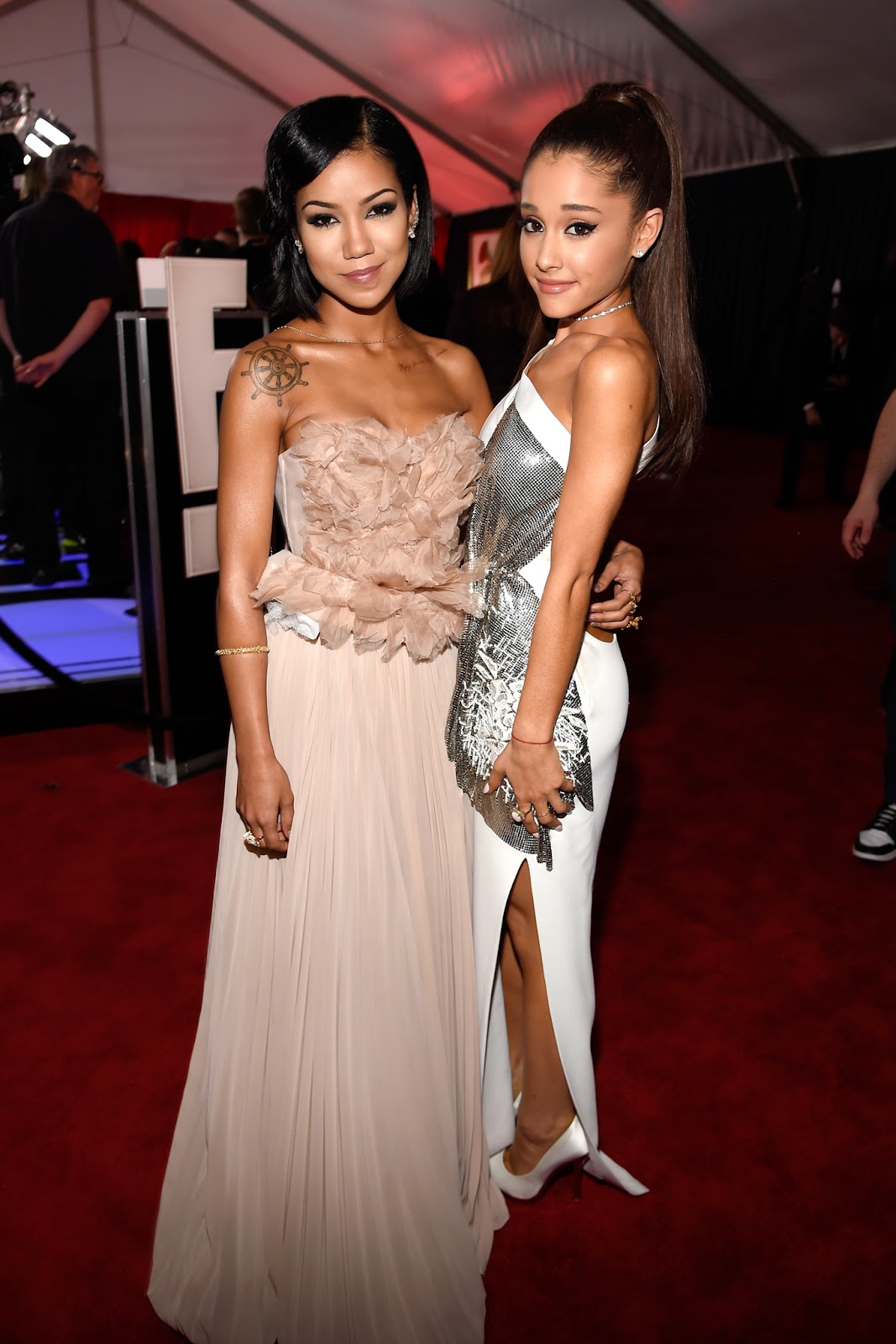 Jhene Aiko probably just wanted to feel like a pretty princess on her special night, but this delicate Alberta Ferretti is all wrong for this event, especially when you are a sexy young songstress. Get her a sparkly mini or leather catsuit, stat! 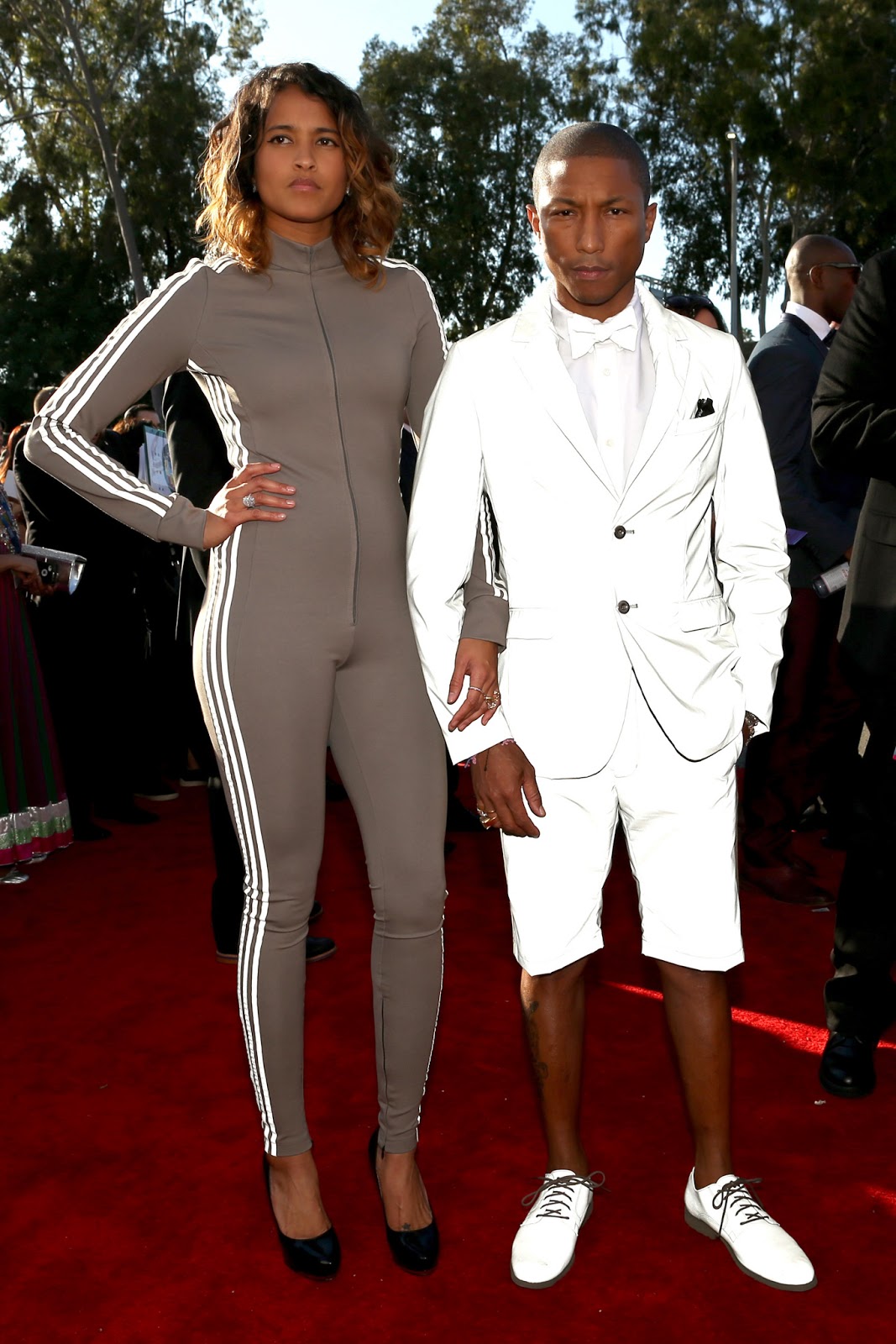 Pharrell's paramour Helen Lasichanh looked like she was sent to Star Trek jail in this dirty dishwater-hued Adidas bodysuit. This is the jail jumpsuit of the future, mark my words. 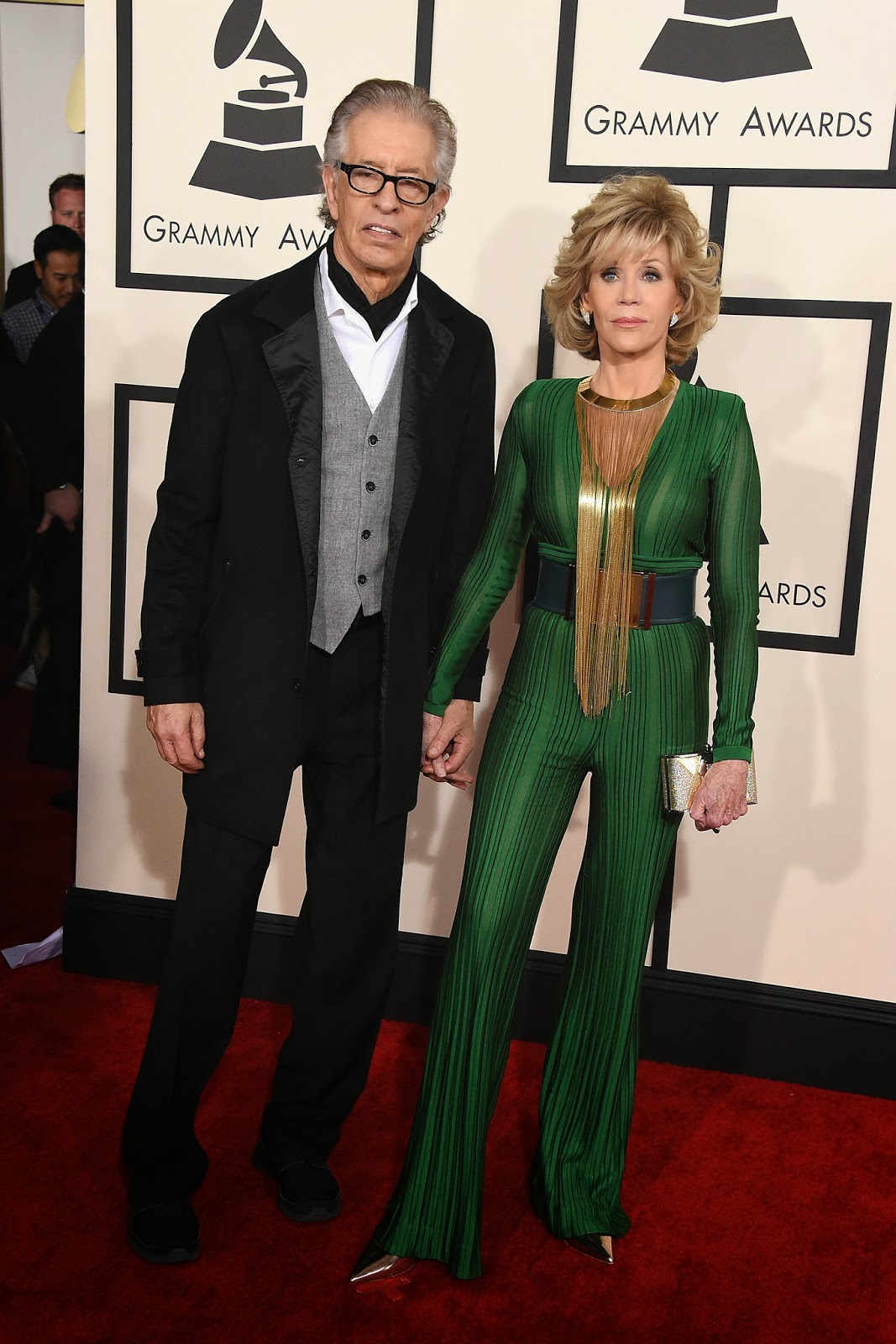 She's got the banging body of a 30-year-old, but Jane Fonda seems to be taking her fashion cues from Gumby (as widely stated by the Twittersphere). Part of me has to give this old broad some kudos for never playing it safe. 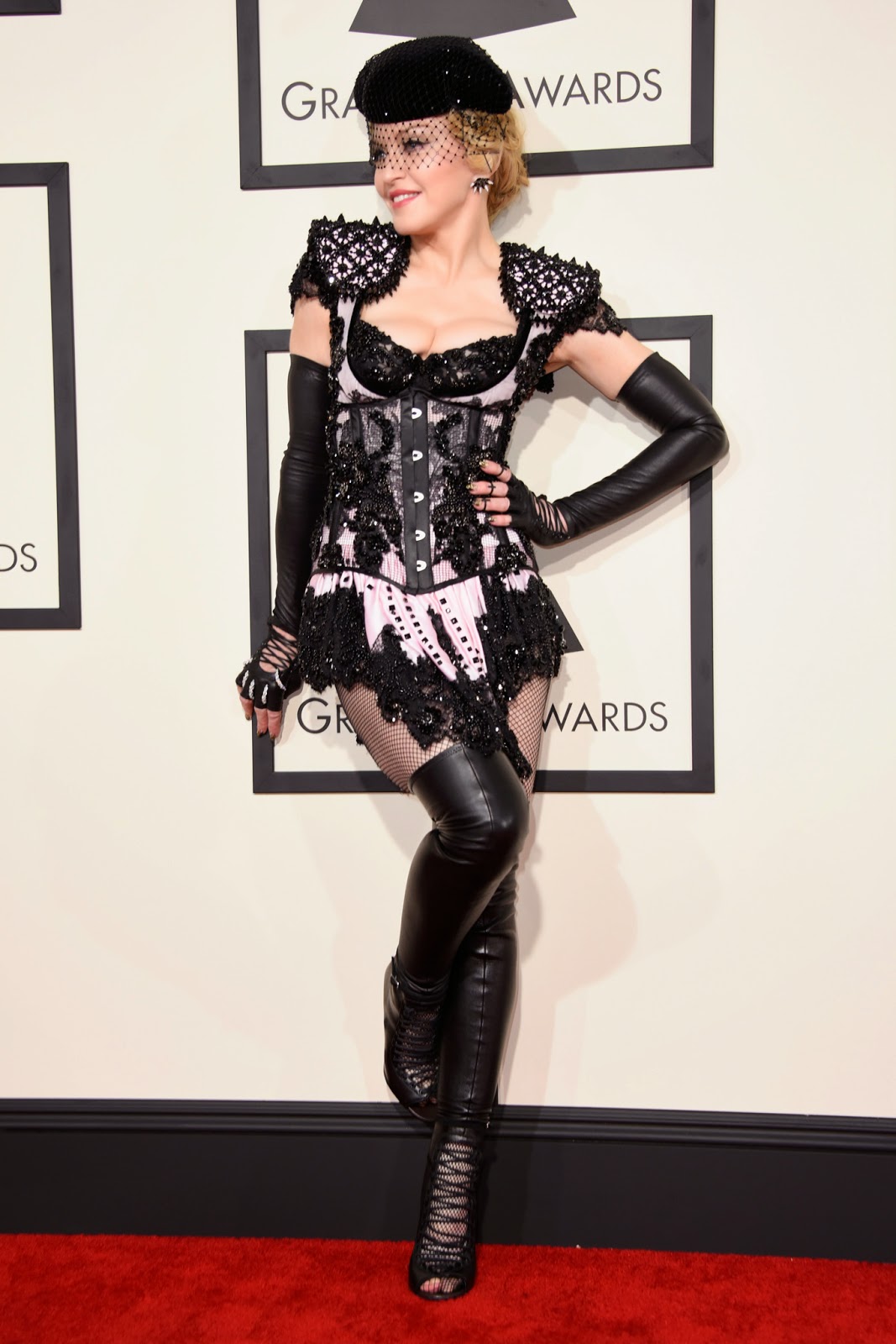 Let's not even talk about whether or not Madonna's Givenchy matador costume was good per se...that's never the point with Madonna. I was more concerned about the really deplorable cleavage situation. This was not doing her ANY favors, and it's not like this woman has old lady boobs! Her pancaked boobs look off-kilter. Her flash of butt cheeks on the red carpet also felt desperate for attention rather than...cheeky. 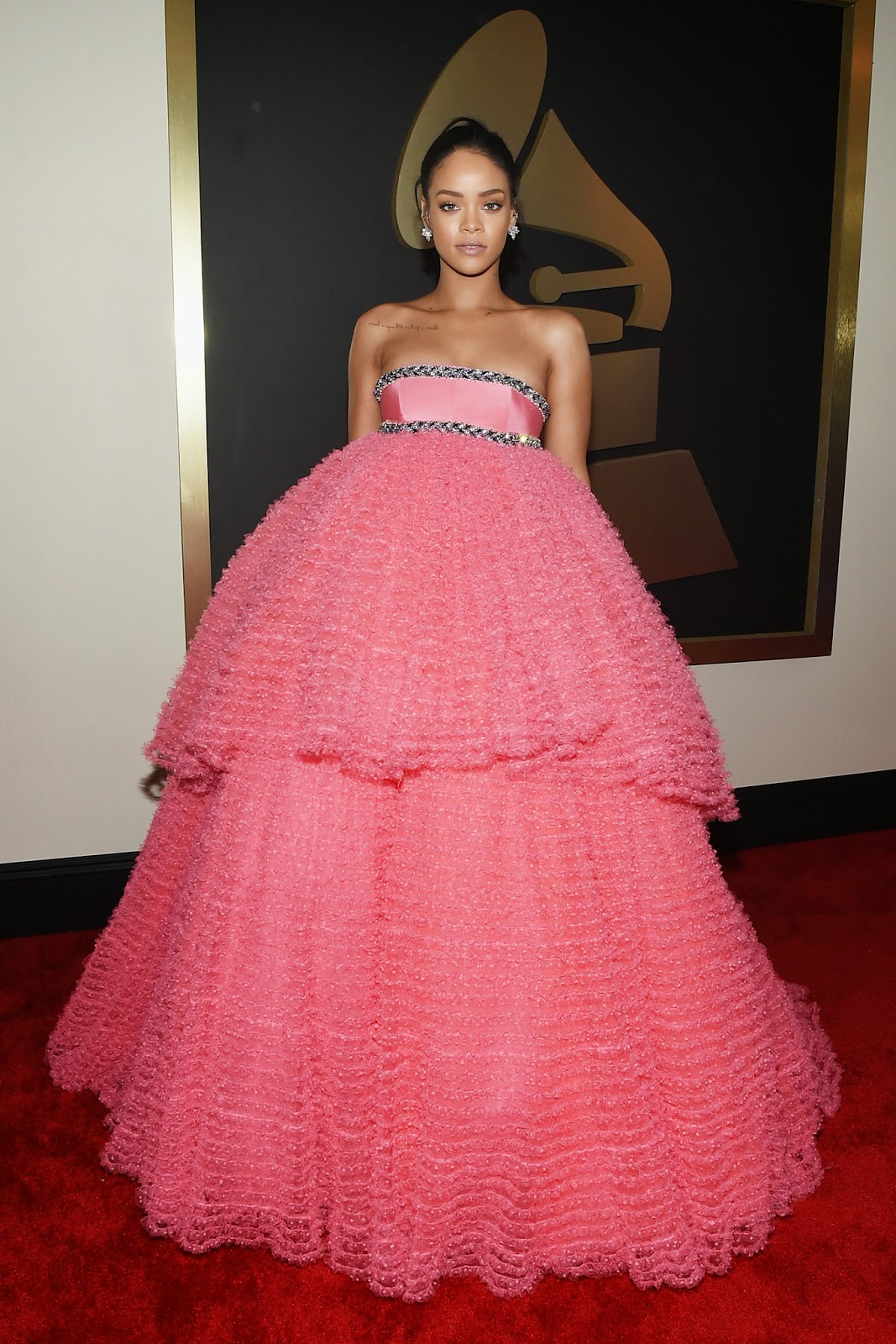 And although I can admire the capital F-Fashion of this Giambattista Valli couture confection, it just seemed ridiculous in real life. Can you imagine trying to sit beside her throughout the show? It would be like trying to share a seat with an itchy cloud. Even her face here looks like she just realized she looks like a Cupcake Doll from the 80s. 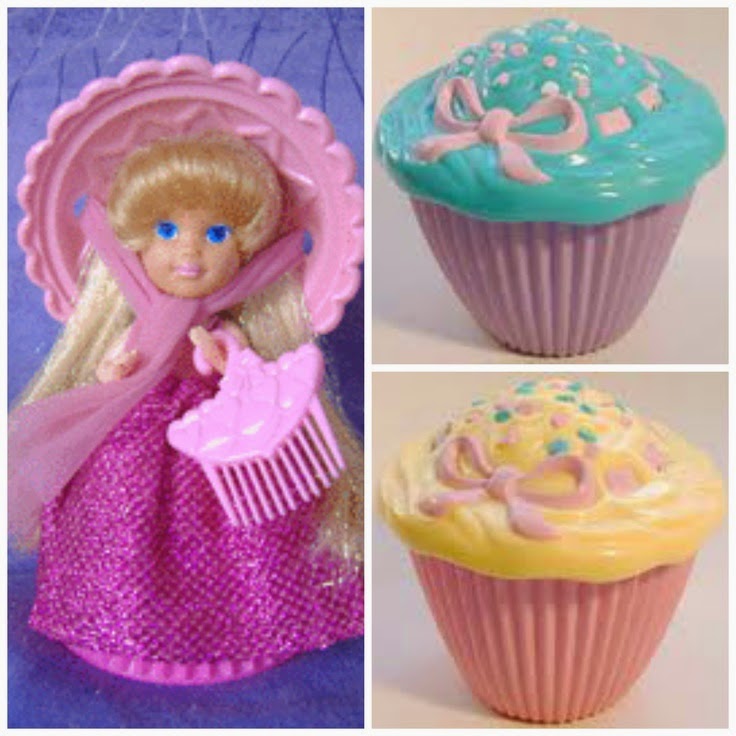