Savannah: What We Ate 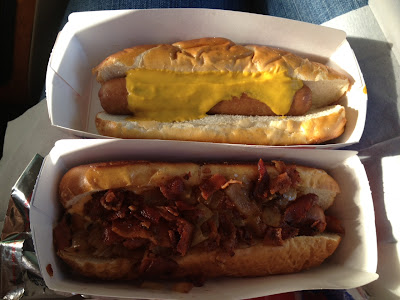 We kicked our trip off right with Sonic's new pretzel dogs. Seriously, it's such a delicious combination that Ashleigh took a bite and said, "This is impressive" and I deemed the folks at Sonic "genius masterminds." 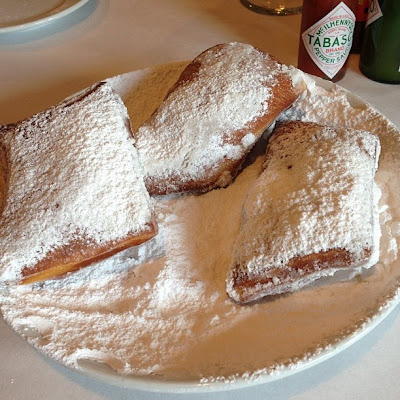 Named for Louisiana's most famous politician, Huey Long, Huey's On the River specializes in Louisiana cuisine in a lovely light-filled spot right on Savannah's riverfront. We started out with delicious beignets and praline sauce...our healthy eating was officially taking a breather. 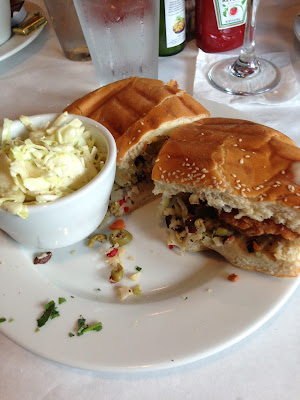 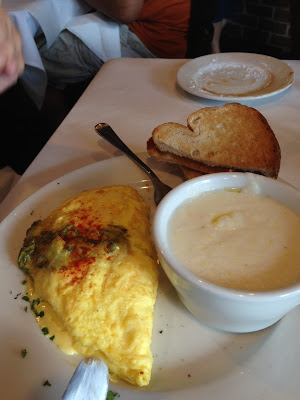 Ashleigh had the Pontchartrain omelette, with creamed spinach, artichoke hearts, baby Swiss and hollandaise. She was dying over her side of parmesan grits! 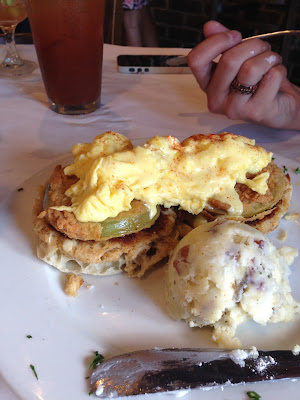 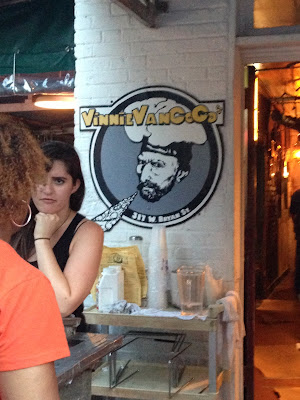 We had a super late dinner at one of Bret's college haunts, Vinnie Van Go Go's, one of my favorite pizza places of all time. 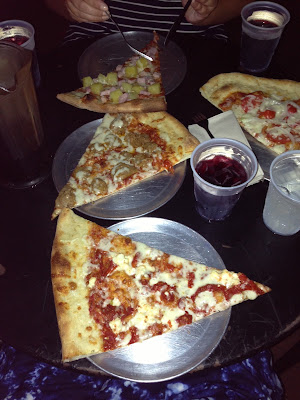 Vinnie's is famous for its perfectly crisp slices that are bigger than your head. I had mine with sun-dried tomatoes and feta and every bite was a win. 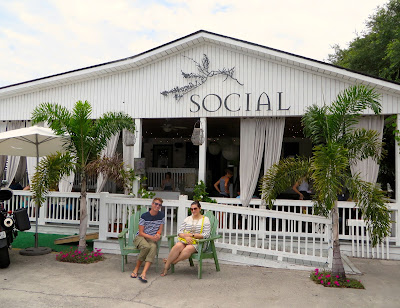 On Saturday, we enjoyed a long, luxurious brunch at the Tybee Island Social Club. Everything was right about this place; it had a casual, but chic atmosphere, was super easygoing and had a sophisticated food and drink menu. We seriously stayed there for a few hours, and it seemed like many people do! 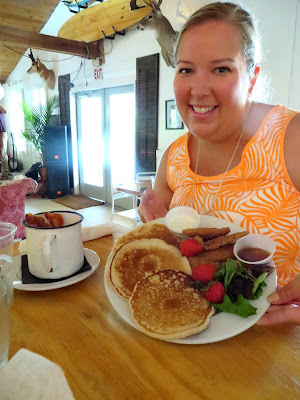 Ashleigh enjoyed chicken and flapjacks, with grits and bacon served in a cute enamelware mug. 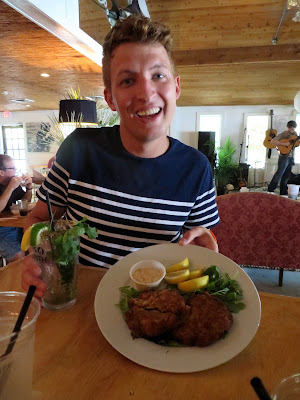 Bret had "shrimpy crab cakes" served with chipotle aioli, which gave it a great kick. 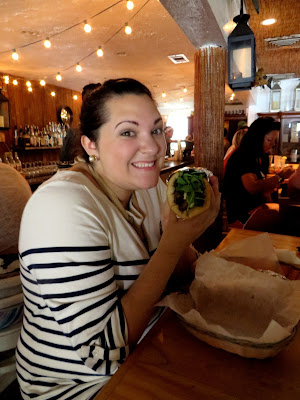 I was super excited about my steak tacos: lime- and tequila-marinated skirt steak, baby arugula and the most delicious garlic aioli wrapped in a pita. I had two and it was the perfect amount of food. 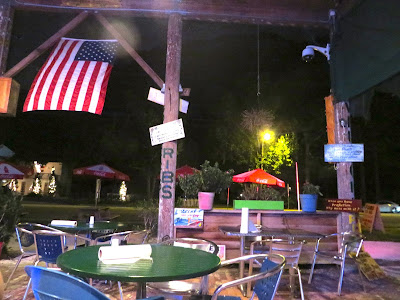 After an afternoon of swimming at the beach, we went for a late dinner to Gerald's Pig & Shrimp, a cute outdoor restaurant that seemed promising when we first drove onto the island. I wish we had made it a little earlier, because they were out of many menu items by the time we arrived, including their famous limeades. Also, eating late outdoors in Tybee isn't for the faint of heart...the palmetto bugs and cicadas were out in full force by the end of our meal! 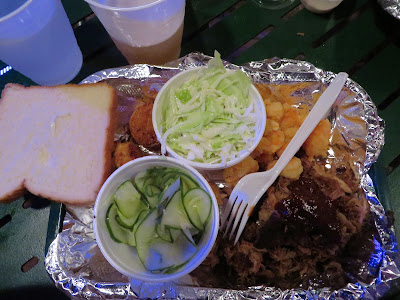 We each chose a combo platter. Bret and Ashleigh went for the shrimp & ribs, while I had the fried shrimp and pulled pork, with cucumbers, cole slaw and jalapeno hush puppies. The pork was a little dry, but otherwise, it was all good. 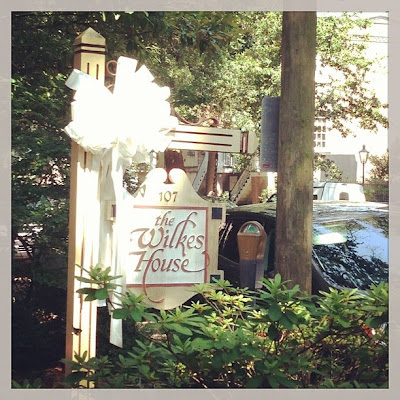 On Monday, we enjoyed a grand Savannah tradition: lunch at Mrs. Wilkes' Dining Room, an emporium of Southern comfort food.

The Wilkes House preserves the old-fashioned experience of a boardinghouse dining room, where strangers might meet to share food family-style. Lines form early outside, and parties are combined at the large tables. By the end of the meal, you're besties! 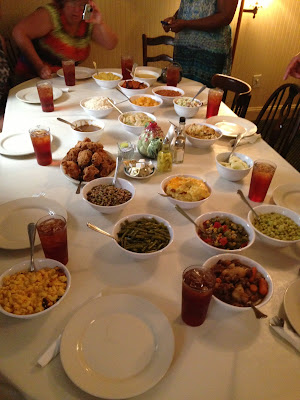 We came in and found a table already full of perfect Southern grub: fried chicken, pork bbq, mac and cheese, beef stew, collard greens, green beans, lima beans, okra, cheesy potatoes, cole slaw, cucumber salad, butternut squash, yams and on and on and on. Anything you want more of, they'll bring you. It's like a Willy Wonka factory of comfort food. 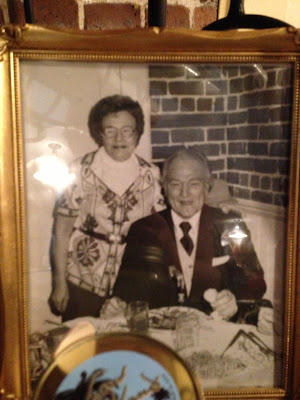 Sweet Mrs. Wilkes' picture is displayed in the lobby! 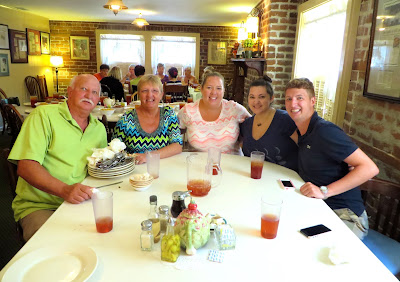 Our party! I'm not the biggest fan usually of Southern food, but I loved everything I ate, especially the simple cucumber salad, made with vinegar, salt and pepper.

Clearly, we ate our damn way through the south! My first purchase at the grocery store yesterday? Green tomatoes.

Email ThisBlogThis!Share to TwitterShare to FacebookShare to Pinterest
Labels: eating out, travel