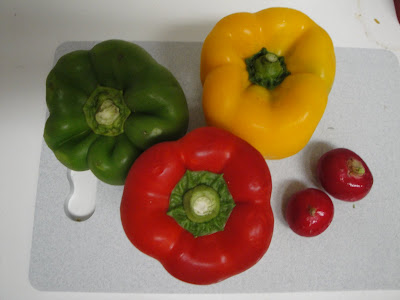 Let me tell you a story about fajitas.
In a fit of anger/stress/work-related crazy, I asked Sean if he could handle making fajitas for dinner. He said, "Ummmmmmmm.....ok." Then, while I was trying to finish up an article, he kept asking me how to make fajitas, which cookbook to use, what he needed to do, etc. Needless to say, I was quickly losing my mind.
This is where the ladies in the audience are nodding, cause they feel me. I'm not sure what it is about our genetic make-up or learned gender roles, but when women need to know something, we look it up and when men need to know something, they find a way to avoid looking it up. I hate to generalize, but in this instance, Sean's suggested recipe for fajitas was, "I'm just going to chop up some peppers and cook the chicken and roll in up in a thingie."
I said he had to season the meat, and he said, "With what?" And that's when I turned into Medusa.
Needless to say, the fajita plan got scrapped until a couple nights later. And because I'm a woman who wields Google like a weapon, I had no qualms about looking up a recipe. 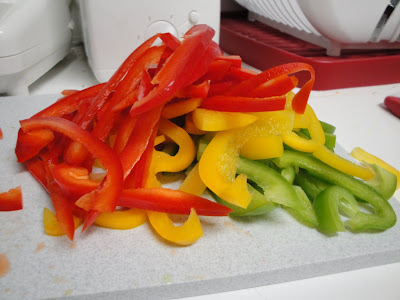 Sean might not be great at looking up directions, but he's stupendous at taking them. These are the peppers he diligently chopped. 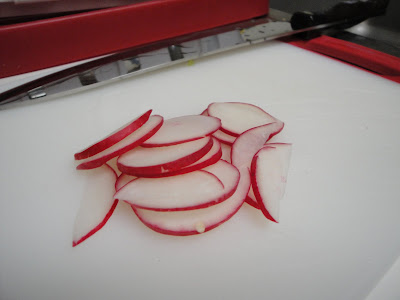 These are the radishes he diligently chopped! 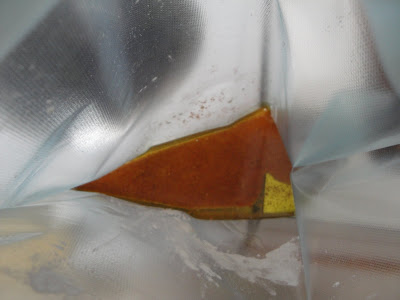 I quickly put together a marinade of cumin, chili powder, garlic powder, olive oil, salt, pepper and a tablespoon of cornstarch (the scariest of ingredients!). 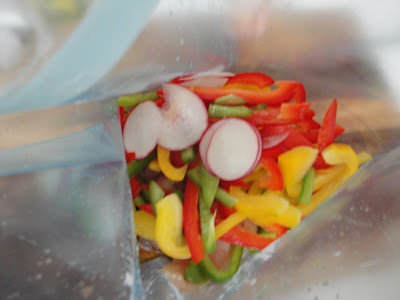 I then added all the peppers, radishes and bite-size pieces of raw chicken breast and massaged the marinade into the mix. I popped it in the fridge for about 15 minutes. 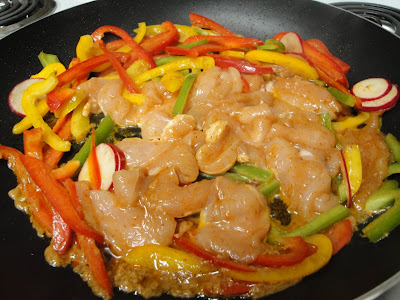 With the stove set to medium-high heat, I tossed the bag's contents in the skillet and cooked until the chicken pieces were done. 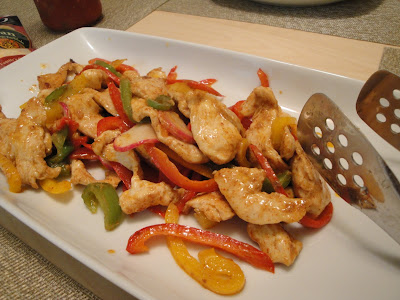 Ta-da! Quick and easy chicken fajitas that even a Sean could make (assuming someone could follow him around the kitchen, explaining where everything is and what cornstarch does). If we had a food processor, it would have been very quick and easy to make, so I can recommend this for weeknight cooking.
As for Sean driving me into Gorgon-level crazy anger, I think we've come to an agreement. We'll have to keep some food on hand for those instances when Sean has to make dinner, like those frozen pasta meals. What's another dish that's easy and self-explanatory for a man who doesn't like cooking?
Posted by Amber at 11:00 AM

Frozen anything will do for the most part. Frozen pizza would be good, but I can't guarantee he wouldn't eat it any old time.

You could also get boxed meals that say "just add chicken" or beef or whatever.... I guess any non-perishable, all-inclusive meal package, probably with a "seasoning" baggie, will do.

Okay, I was definitely nodding in understanding reading that, but alas, there's hope! Chuck's go-to meal when he had to cook used to be macaroni, or if I was LUCKY he'd get one of those Zatatan's red beans and rice mixes and throw in some turkey kieturkulbasa (totally tasty by the way). Anyway-now he's become a master at Cuban Picadillo. I've got a quick and easy recipe if you're interested and it's MAYBE six steps and soooo tasty over rice!

I think we'll start small...maybe put him in charge of tacos or something. lol.

Meatloaf is easy guy food. They just mush together the ingredients. And since it's messy he might enjoy it.
My Dad also made spaghetti frequently.

hmm, what if he put chopped up steak (lazy version: chop steak-ums) and cooked onions+peppers on a sub roll w/ provolone cheese and broiled it for a minute or two until melty and delicious? Or substitute steak with Italian meats. yum.