Eating Out in San Francisco

One of the many reasons I wanted to go to San Francisco was its reputation as a great eating city. And as all of you know, I love to eat and I love to take pictures of pretty food, even if my pictures aren't always amazing. I thought I'd highlight some of the delicious food we had, and if you someday go to San Fran, you'll have some recommendations from me! 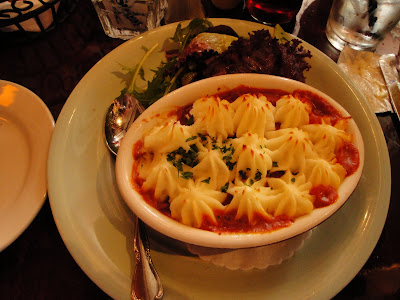 Our first stop was Johnny Foley's Irish Pub in Union Square. I thought my new husband deserved the food of his kinfolk, so we popped in there not long after landing in San Fran and he ordered a "cottage pie," which was basically a shepherd's pie. I hate mashed potatoes (I know, I'm crazy), but those are quite pretty. 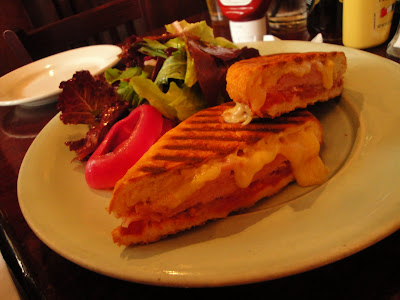 I had the first of many fabulous, fabulous sandwiches I had that week. This one was a panini with turkey, Irish cheddar, honey dijon mustard, onions and mayonnaise. On the side, they served the most delicious pickled onions...they tasted like fall.
Side note: the next day, after seeing the Golden Gate Bridge, we made our way over to the The Warming Hut on Crissy Field, which is a National Parks-operated gift shop and sandwich stop. I had a delicious honey dijon turkey (oh wait, isn't that what i just had? lol) pressed sandwich on sourdough and it was fab. 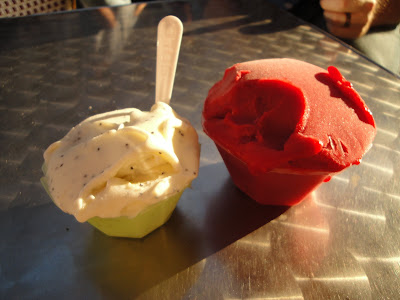 Anyways, on our way back to the hotel we stopped into Dolce Gelato on Sutter Street, where Sean got his customary raspberry sorbet and I got the most delicious limoncello poppyseed gelato. 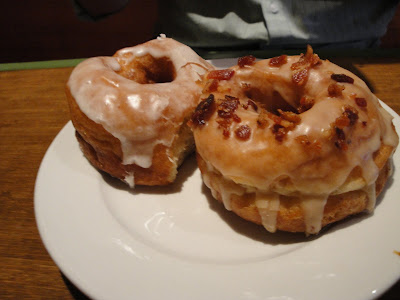 On Wednesday morning, we took a bus down to the Mission in search of a donut shop recommended by my friend Becky. Dynamo Donuts specializes in gourmet, wacky flavor combinations on simple, perfect donuts. I had chocolate saffron and caramel de sel (not pictured), while Sean had vanilla bean and -- wait for it -- maple bacon apple. I was dying for a bite of his maple bacon apple donut, but that heifer devoured it before I had a chance!
He said it was just okay but I bet I would have loved it. Mine were good, but I overheard them talking about pumpkin donuts to be sold this week and I was immediately craving that instead. 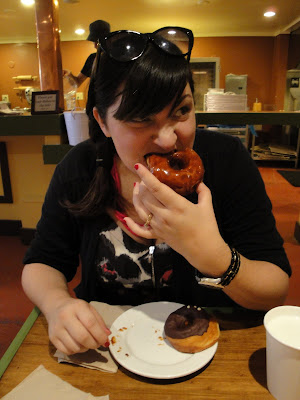 Mmmmm. Salty caramel is a sure-fire win with me. 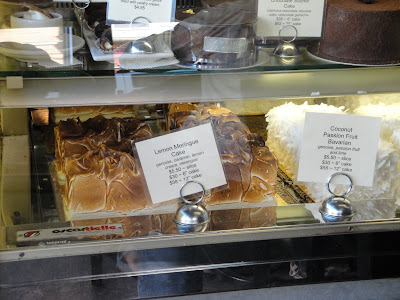 We made our way across the Mission to Guerrero Street, where we ate lunch at the world-famous Tartine Bakery. Tartine is known for its desserts and breads, the latter of which makes up their newest cookbook. Check out the burnt meringue on that lemon cake? I was dying for a piece, but as you'll see, I was just too stuffed. 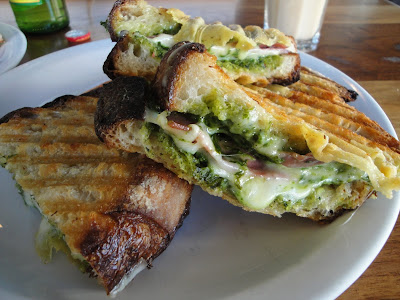 I ordered a soppressata, fontina and broccoli rabe pesto panini and it. was. incredible. That "country" bread was the most amazing spongy, flavorful bread I've ever had. The combination of spicy meat and savory cheese was just perfect.
The one downside? The restaurant gives you 1 1/2 sandwiches, which is a LOT of food. We both ate one half and looked at each other and knew we would be taking the leftovers. That meant we ended up cancelling our reservation at Flour + Water, an Italian restaurant I've been reading about for a year!
It's okay though...eating the rest of that sandwich while watching Modern Family in the hotel room was kind of awesome. 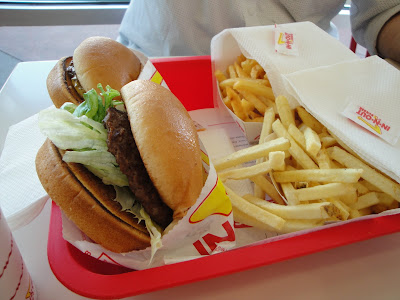 On Thursday, we popped into In-N-Out, the famous West Coast burger chain, on Fisherman's Wharf. Sean is a bit of a burger fanatic and we knew his first California trip had to include In-N-Out. The restaurant is fun because it has its own secret lingo; you can get your fries extra crispy by ordering them "well-done," you can get a burger wrapped in lettuce by saying, "protein style" and so on.
I'm sad to report, however, that the burgers just weren't as good as I remembered from my last Cali visit. Sean is gonna stick with his hometown faves; Five Guys foreva! 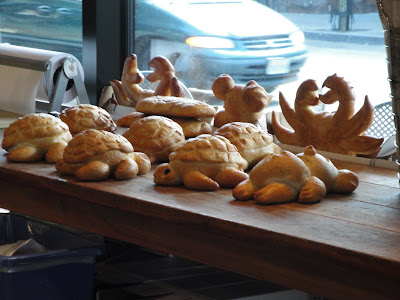 After an unsatisfying burger, imagine my disappointment when we ambled into Boudin Bakery, home of the sourdough, with full stomachs! It was a beautiful store (it has an attached cafe) and my eyes were definitely bigger than my stomach. You can buy sourdough in animal shapes! 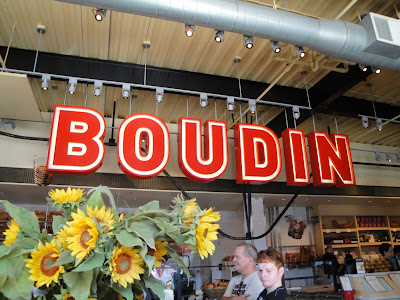 I LOVED the signage. 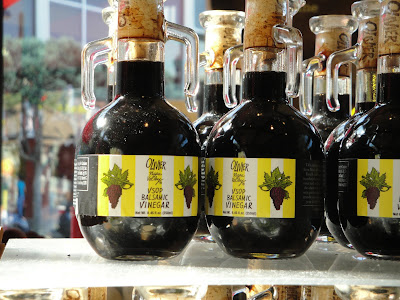 And the displays. I bought a few Christmas gifts and some flour-sack kitchen towels for myself. 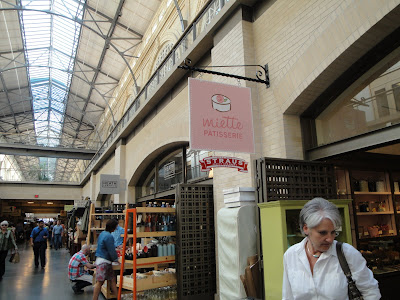 From there, we took a bus to the Fleet Building, which has indoor emporiums of famous San Francisco brands. We were searching for macarons at Miette, a pastel-perfect patisserie. 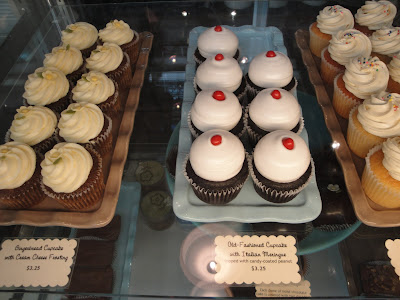 Their displays all looked like paintings! I bought three macarons (which were actually kind of disappointing...not as airy as they should have been) and two packages of champagne gum drops (they taste like white grape juice! delicious). 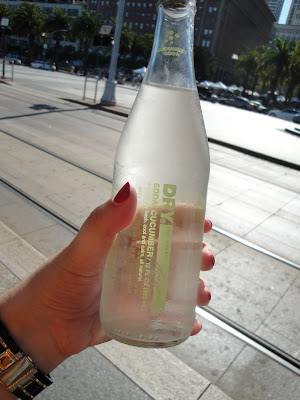 It was insanely hot in San Fran last week, so I kept buying drinks everywhere I went. I finally got to try Dry soda! They have flavors like kumquat, cucumber and lavender. The cucumber was strange at first, but refreshing. 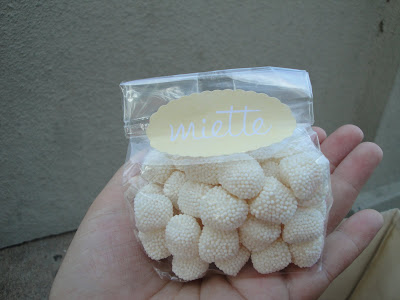 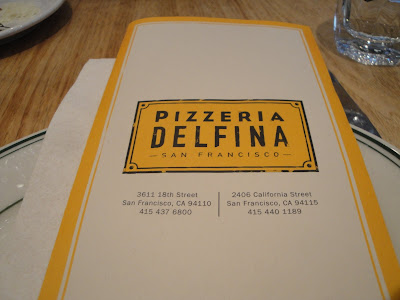 Since we had to cancel our Flour and Water reservation, I consulted my guidebook for another pizza recommendation and we ended up at Pizzeria Delfina in Pacific Heights and it was THE BEST PIZZA OF MY LIFE.
The ambience is perfect; it's a chic neighborhood restaurant where families, couples and hipsters dined in perfect harmony. 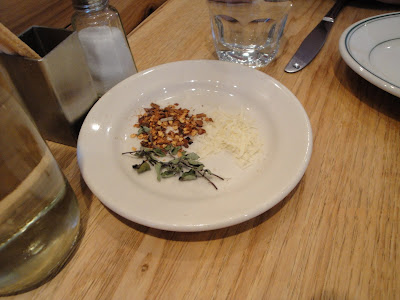 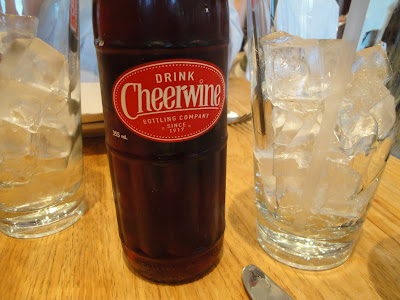 And they had Cheerwine! And played mid-90s slow jams! 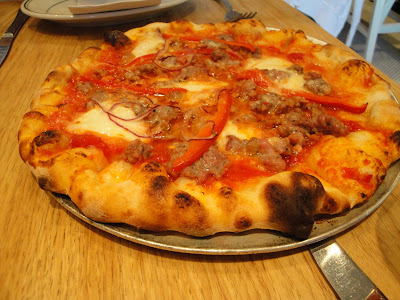 We ordered a salsiccia pizza with house-made fennel sausage (the magic ingredient), hand-stretched mozzarella, red peppers and red onions. The sauce was that perfect thin sauce that I love and the crust was out of this world. I was eating the pizza and saying I craved it at the same time. 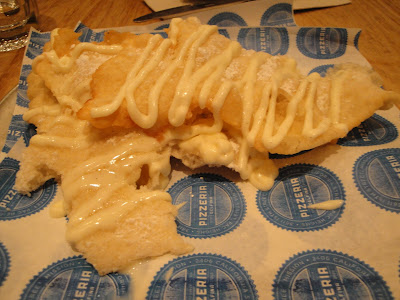 For dessert, I ordered zappole di san giuseppe, which is fried pizza dough drizzled with marscapone cream. It was like a fancy funnel cake and was amazing. 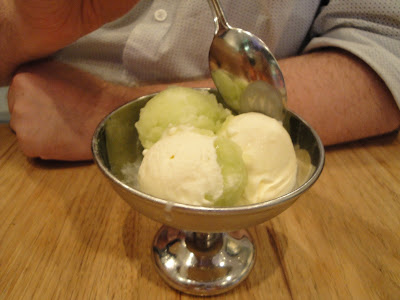 Sean had olive oil and granny smith gelato, a pairing suggested by our waitress that was surprisingly perfect.
All in all, we ate like kings, but we did manage to miss almost every restaurant recommended to us by friends. So if you go soon and you're craving something other than sandwiches and pizza (lol), here are some other places I've heard great things about:
Posted by Amber at 3:10 PM

Email ThisBlogThis!Share to TwitterShare to FacebookShare to Pinterest
Labels: eating out, honeymoon, travel