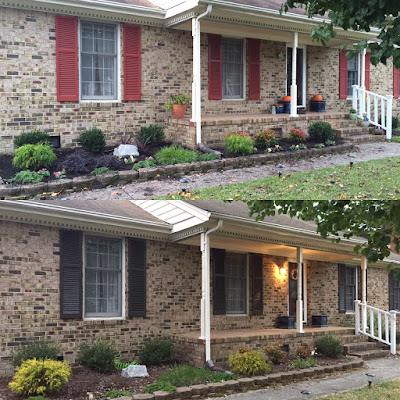 Our house exterior recently had a big makeover, and like putting mascara on, it really completes the look! From the day we pulled up to the open house, I said, "I would have to get rid of those red shutters." Call me boring, but I like a fun-colored door more than bright shutters, and I have particularly always disliked red shutters on brick houses (we all have our weird things, right?).

Considering that was my first impression, it's pretty amazing I made it this long without actually whipping out a paintbrush, but as any homeowner can attest: there's always something else that needs fixin'. Around the fall, I got really itchy to tackle this project, but then the weather took a turn, we had a bonafide hurricane, and before I knew it, the moment had passed.

Meanwhile, this was happening... 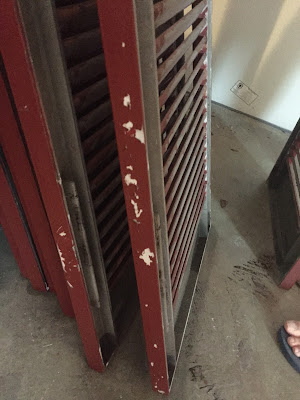 Peeling. Like a lot of peeling. White fiberglass shutters were to the previous owners what red shutters were to me, apparently, and their red paint job has been rapidly deteriorating over the past two years. Most people would never notice, but I couldn't pull in and out of the driveway without taking a mental inventory of the white spots peeking through on each shutter. The time had come!! 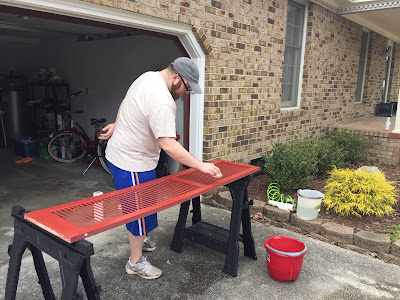 Because I'm a newbie at all this, I genuinely believed we had wood shutters until we pulled them off the house and realized we didn't have wood...and they didn't look like vinyl either. Mystery! We truly weren't sure what the right protocol is for painting chipped fiberglass shutters, but the folks at Home Depot nonchalantly shrugged, said "Sand it and then paint" and we decided it was time to just go for it.

We split the project over two weekends, which I can't recommend enough. If you, like us, are cursed with louvered shutters, you're going to need some time to really get intimate with the nooks and crannies.

On the first weekend, we hosed them off, wiped them down, cleaned them with TSP and wiped again with soapy water and then AGAIN with rags. After we felt sure we'd swept away every cobweb, we sanded them to remove the obvious peeling paint and set them aside for a week while I tried to settle on a swatch. 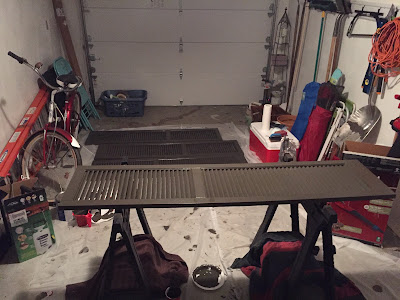 I had always known I wanted to do black shutters. That is, until I went to pick out black swatches and realized there are MANY shades of black. On a friend's recommendation, I scoped out the Sherwin Williams line at Lowe's, and on a whim, grabbed a swatch of Black Fox. Black Fox is an almost bronze-charcoal-chocolate color that defies definition. It is not black — that's for sure — but as I held swatches against our brick, I realized it was a great complement to the dark bricks. And although I'm not in love with the shade of our brick, I realized everything will work out better if I play nice.

I chose the Sherwin Williams Weathershield paint with primer in semi-gloss and bought one gallon (we have quite a bit left over, but that's good for touch-ups). Because the pollen was heavy, we decided to do the whole project inside the garage. Using a trim roller for the fronts and sides and angled brushes for the louvers, we painted on Sunday and (sadly) even a little on Monday night for the amount of time it took to listen to the entire S-Town podcast. One coat was definitely not enough, but thankfully, a second coat seemed to do the trick! 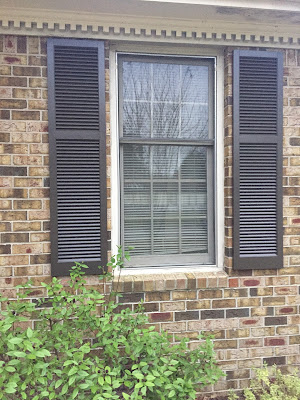 We let the shutters cure for a few days and finally, Sean put them back on the house and I came home, looked up and went, "OMG!" At first, I thought...am I going to be OK with not having the black shutters I always pictured? I also felt more committed than ever to paint our front door a nice color for some contrast. 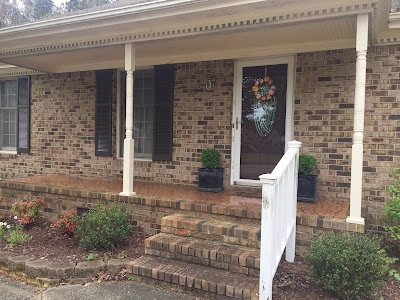 But after looking at a before and after, I can say for sure that the house is more ME and I think the color was a great fit for the brick. I was even inspired to plant dwarf boxwoods in my iron planters and now I'm using all the virtual painting apps to try to narrow in on a color. Any ideas?
Posted by Amber at 9:00 AM