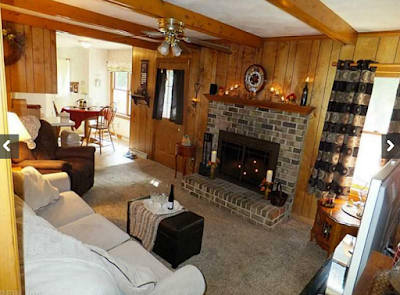 When we purchased our house, the den was basically a cave. It was so dark that, when looking at it from the light-filled kitchen, I had to squint to make out shapes. We knew from the moment we walked in that we'd be painting basically every inch white and adding hardwood floors. 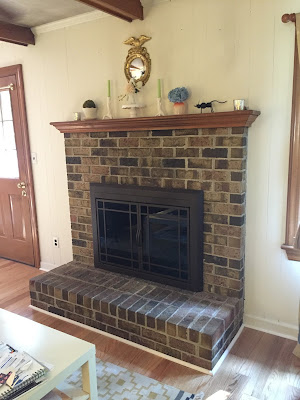 Painting the paneling white did WONDERS, and we actually like the country feel of the white-painted panels. What we couldn't decide, however, was whether to alter the brick fireplace or leave it as-is. It always felt very dark in this bright room and I was never in love with the brown brick. We debated it for more than a year and then I asked my designer friend Rachel and she said "YES whitewash it!" so fast and decisively, I almost was embarrassed I hadn't done it already! 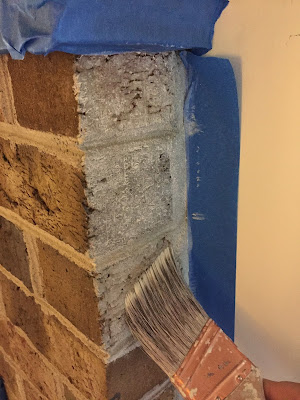 So, armed with a mixture of 1 part leftover white paint to one part water and a marathon of Fixer Upper, I taped off the fireplace and got going before I could chicken out. 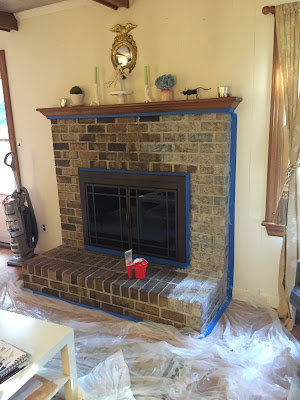 Brick is incredibly absorbent. Some folks like to blot the white paint to give it more of a washed look, but I found the brick absorbed the paint/water mixture so quickly, blotting basically just undid the work. This is a shot of the process. 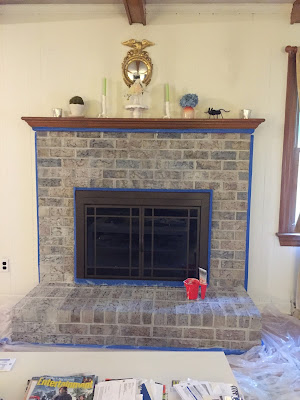 After one coat, Sean and I both thought it could use more and decided to do a second coat of the whitewash. All in all, the whole project took 3 episodes of Fixer Upper and a tiny bit of Property Brothers. 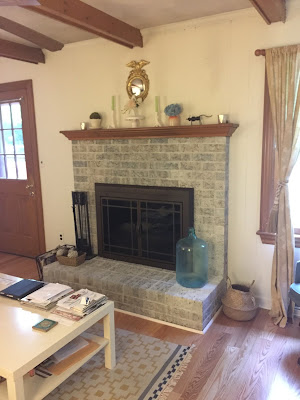 And, the finished product! It already makes the room feel even bigger, and I love the way the blue jar pops on the white brick. The funny thing is, we think it looks better in photos than in person. Both of us were surprised how blue-gray the finished product ended up and Sean says it almost looks like the fireplace is made of bluestone, like the campus of Virginia Tech.

We've agreed to live with it like this for another week before we decide if we want to paint it all-the-way white, which he loves because it reminds him of his aunt and uncle's house. On the one hand, I like the texture of whitewash and fear opaque white will be TOO much white; on the other hand, I've never heard of too much white. What do you think?
Posted by Amber at 9:00 AM

I love the whitewashed look. I'm a big fan of brick fireplaces painted white (I painted ours white in our house in Arkansas), but in this case, I don't think there is enough contrast with your wall color to paint it totally white.

I agree with Heather. It may become a bit too white in there. Maybe leave it for a bit and if you ever change the wall colors you can revisit the idea of fully painting the fireplace. In any case, it's always easier to put more paint on than it is to take it off if you change your mind later. It looks amazing! Awesome job!